Book Review: THE SHADOWS (BOOKS OF ELSEWHERE VOLUME ONE) by Jacqueline West 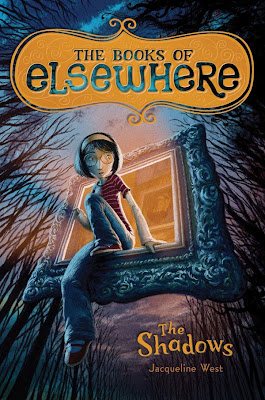 FIRST PARAGRAPH: MS. MCMARTIN WAS definitely dead. It had taken some time for the neighbors to grow suspicious, since no one ever went in or came out of the old stone house on Linden Street anyway. However, there were several notable clues that things in the McMartin house were not as they should have been. The rusty mailbox began to bulge with odd and exotic mail-order catalogs, which eventually overflowed the gaping aluminum door and spilled out into the street. The gigantic jungle fern that hung from the porch ceiling keeled over for lack of water. Ms. McMartin’s three cats, somewhere inside the house, began the most terrible yowling ever heard on quiet old Linden Street. After a few days of listening to that, the neighbors had had enough.

Jacqueline West will be here Thursday to face the 7 Questions.

Esteemed Reader, Friedrich Nietzch once wrote, "if you gaze into the abyss, the abyss gazes into you." Or maybe it was his sister. Either way, I'm still not entirely sure what it means. But it inspired Hitler, who was a painter. In The Books of Elsewhere, if you stare into a painting, the painting stares into you. And that ought to be worth an email from author Jacqueline West asking why I used Hitler to segue to her book for children:)

What is it about paintings that so captures the imagination of writers? Certainly enchanted paintings have played a central role in the works of Rowling, King, Wilde, Dahl, and many, many others. Perhaps it's that the frame of a painting sometimes looks less like the boarder of a picture and more like the edge of a window to another world. An Elsewhere TM where the viewer could tour alien landscapes, meet interesting characters, and maybe even get in an adventure. For most viewers this will never happen because they don't have the magic old-fashioned glasses.

Meet eleven-year-old Olive Dunwoody. She has the glasses.

West didn't just kill off poor Ms. McMartin in paragraph one for no reason. She's left that old stone house on Linden Street vacant so Olive and her family can move in:

It wasn’t long before someone heard about the old stone house for sale at an astonishingly low price and decided to buy it.
These someones were a Mr. Alec and Mrs. Alice Dunwoody, a pair of more than slightly dippy mathematicians. The Dunwoodys had a daughter named Olive—but she had nothing to do with the house-buying decision. Olive was eleven, and was generally not given much credit. Her persistently lackluster grades in math had led her parents to believe that she was some kind of genetic aberration—they talked to her patiently, as if she were a foreign exchange student from a country no one had ever heard of.

Observe how West identifies conflict between her characters in their introduction, which is a writer's trick worth making note of. After all, the whole point of crafting characters is to get them in conflict with each other and as many other conflicts as can be had. Conflict keeps pages turning.

Olive's parents are nerds of the highest order to such an extreme degree as to make Elissa Brent Weissman blush. For this reason, it's hard not to be fond of them, but seriously:

“We met in the library at Princeton,” answered Mrs. Dunwoody, her eyes glowing with the memory. “We were both reading the same journal—The Absolutely Unrelenting Seriousness of Mathematics for the New Generation —”
“Or ‘Ausom’—get it?” interjected Mr. Dunwoody. “‘Awesome.’ Very clever.”

I suspect Olive will grow up to be a nerd of a very different sort: an English nerd, which is a nerd just as awkward as a math nerd, though usually possessing a greater fondness for alcohol:) Olive is aloof and introspective. She doesn't appear to have friends, but that's an unfair judgement as she just moved. Still, if there weren't fantastical figures about for her to get in an adventure with, I'm certain she would invent them. Olive's mind is quite a bit like a writer's mind, and I suspect writer's everywhere will identify with this passage, which might have been taken from my own youth:

In her bedroom, Olive dug through the closet looking for a pair of slippers to wear for protection against the chilly stone floor. But there were no slippers to be found. Olive owned six pairs of slippers, but none of them were ever where they belonged. This was because Olive's body often did things without consulting Olive's brain, which was usually busy with something much more interesting than putting things away in the right place.

In any case, West puts Olive at odds with her parents from the start and keeps them at odds for much of the novel. There are many plot conveniences derived from this device, but more, it creates conflict, which keeps pages turning. Olive's issues with her parents are not the main conflict, though I might argue that a girl who feels out of place in her family might be more prone toward seeking out fantastical worlds of escape than one who doesn't.

West has a whole adventure planned for us rooted in a greater conflict that will stretch over the series, but that doesn't diminish the brilliance of Olive's smaller conflict with her parents. Every scene she has with her parents is made more interesting and more readable because of the conflict, and is there such a thing as a book that is too interesting or readable?

Eventually, Olive puts on the magic old-fashioned glasses and is able to travel to a wonderland inside the houses paintings complete with talking cats who never seem to have good news:

“Keep your eyes open. Be on your guard. There is something that doesn’t want you here, and it will do its best to get rid of you.”
“Get rid of me?”
“Of all of you. As far as this house is concerned, you are intruders.” Horatio paused. “But don’t get too anxious. There’s very little you can do about it either way.

And so begins an adventure that will suck the reader into West's world as Olive is sucked into a painting. The Shadows is an exciting first novel in what promises to be a wonderful series and you should add it to your reading list.  That's where I'll leave my review and my description of the plot as to avoid spoilers.

But I do have two more passages to share and one last point to make about craft. First, read this:

And the painting at the top of the stairs still seemed to be keeping a secret. Olive stood in front of it for almost half an hour that first night, until her eyes crossed and bits of the trees popped out at her. Nothing. Nothing but the feeling that there was something not quite right about this painting.
And it wasn’t the only one.
There were paintings all over the house that gave her the same funny feeling. Right outside her bedroom door, there was a painting of a rolling field with a row of little houses in the distance. It was evening in the painting, and all the windows in the houses were dark. But the houses didn’t look like they were sleeping comfortably, just waiting for sunrise to come and start another day. The houses looked like they were holding their breath. They crouched among the trees and blew out their lights, trying not to be seen. Seen by what? Olive wondered.

One of the things that had attracted me to read The Shadows in the first place was the promise by other readers that it was a scary book. And I was not disappointed. There are some definite moments of unease and creepiness. I'm admittedly not a parent, but I think most children will enjoy the book and few will have nightmares. Some will, though:)

My second point about craft is to note how West chooses to reveal the magical properties of the paintings surrounding the Dunwoody family. She doesn't bluntly state that a person can travel through them, or even that the paintings gaze into the Dunwoodys in a most Nietzchian fashion. Instead, she draws out the suspense by slowly revealing there's maybe something going on with those paintings:

The shadows suddenly rippled and bent, and within the shadows, a pale splotch darted out of the undergrowth. Olive froze, staring at the white path. She blinked, rubbed her eyelids with her fingertips, and looked again. Yes—there it was. Something was moving inside the painting, a tiny white shape flitting between the silhouettes of the wiry trees. Olive held perfectly still. She didn't even breathe. The tiny white shape made one more quick plunge toward the path, then dove back into the thorny black forest. And then the painting, too, was perfectly still.

When writing middle grade, writers are too often tempted to cut corners as the text must be as sparse as possible (there are acceptable word counts to strive for). Pacing is worth considering and shorter is almost always better, but some effects are worth slowing down for. By drawing out the reveal of a magical object, a writer can heighten suspense and work the reader into a vulnerable frenzy of wanting to know more, which is a perfect state in which to terrify them:)

As always, I'll leave you with some of my favorite passages from The Shadows:

Mr. Hambert, on the other hand, was sweating like a mug of root beer in the sun

In the big old house, their belongings looked small and out of place, like tiny visitors from outer space trying to blend in at a Victorian ball.

Her parents had warned her not to let her imagination run away with her ever since she was three and had woken them night after night wailing about the sharks hiding under her bed. “Olive, honey,” her father had patiently explained, “when a shark is out of the water, it is crushed by the weight of its own body. A shark couldn’t survive under your bed.” Three-year-old Olive had nodded, and went on to imagine sharks slowly suffocating among the dust bunnies.

In the distance, she heard her father knocking his toothbrush on the sink. The house creaked. A twig of the ash tree tapped softly against her window, again and again, like a small, patient hand.


STANDARD DISCLAIMER: All reviews here will be written to highlight a book’s positive qualities. It is my policy that if I don’t have something nice to say online, I won’t say anything at all (usually). I’ll leave you to discover the negative qualities of each week’s book on your own.
Posted by middle grade ninja at 8:32 AM