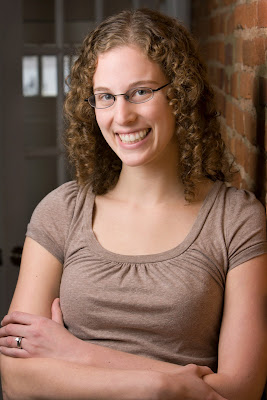 Elissa Brent Weissman has wanted to write children's books since she started reading them. She wrote her first novel when she was 10, and when no one wanted to publish it, she was sad for a little while but then just became more driven. She accomplished her goal in 2009, when her first two novels for 8-12 year-olds, Standing for Socks, and The Trouble with Mark Hopper, hit shelves. These "frothy and fun" school stories are often compared to those of Andrew Clements. They have been praised by Publisher's Weekly, Booklist, and the Horn Book, and Scholastic's Instructor magazine selected The Trouble with Mark Hopper as a best pick for new middle schoolers.

Her newest is Nerd Camp. Click here to read my review of Nerd Camp.

Originally from Long Island, New York, Elissa graduated from the Johns Hopkins University Writing Seminars program, where she wrote Standing for Socks as a senior in a novel-writing class called The Long Work. After graduating in 2005, she spent a year in London, England, reading, traveling, and earning her MA in Children's Literature from Roehampton University. She currently lives in Baltimore, Maryland, where she teaches creative writing to adults, college students, and gifted-and-talented children.

I used to try to write for two hours a day, but ever since I had a baby, that has gone out the window. Now I probably write about six or seven hours a week total, but they’re productive hours, since I know I only have that time while the baby-sitter is there. I probably spend between 7 and 10 hours a week reading for pleasure, a couple hours on top of that if you count reading my students’ work for the classes I teach (which, thankfully, is usually pleasurable). Then, I spend at least another 5 hours on the business of writing, which includes both writing and reading: keeping up with email, doing promotional stuff for my books, playing Spider Solitaire (oh wait, does that not count?)….

I first tried to get published when I was in 6th grade, but that didn’t work out. I wrote my next novel, Standing for Socks (then just called Socks) as a senior in college, for a novel-writing class called The Long Work. One of my professors was very supportive of me and my book, and he referred me to a literary agent. (This process took about a year, and I had my fair share of rejections from other agents and editors in the meantime.) But by the time I finished grad school, a year later, that agent had sold the book to Atheneum at Simon and Schuster.

Both, and both. I was definitely born wanting to tell stories. When I was three or four, my favorite thing to do was play with my Little People. Each of them had a name and a story that I made up. I even had them grouped in families and in classes at school. (Oh yes, I was that big of a nerd.) As I grew up, I filled notebook after notebook with stories. But it wasn’t until I got to college and started studying the craft of creative writing in earnest that I really started to understand what makes a good story, and I started to become a really good writer.

Favorite thing about writing: When my characters get into a situation that makes me think, “Uh oh. How am I going to get them out of this?” That’s when I know my story is working.

Favorite thing about being a writer: Having a cool answer when people I meet ask what I do.

Least favorite about both: The frustrations that come with publishing, especially marketing and promotion (or lack thereof). It’s a competitive field with no guarantees, and it can sometimes feel like no one is reading the stuff I’m working so hard to write.

Do it! It’s very easy to talk about wanting to write, and to think about writing, and to play Spider Solitaire instead of writing. But there’s nothing better than actually getting lost in your own story.

And when you’ve got something you’re proud of, I’ll pass on the advice that my professor gave to me: Just send it out. Send it out, hope for the best, and start working on the next one.

Mo Willems! My husband and I read his books to our baby daughter, and they’re just so hilarious and clever. That’d be one fun lunch.