Book of the Week: BUNNICULA by Deborah and James Howe 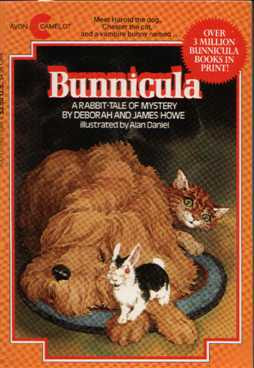 Happy Halloween, Esteemed Reader! I know it's not actually Halloween just yet, but it will be soon enough and it's time to get in the spirit. Nothing's better for that than a little classic middle grade. I'm all for these newbie authors we've been chatting with and the new books we've been reading, but I'm hoping to review more classic middle grade. We might also chat up a few new literary agents. It all starts today with a discussion of one of my all time spooky favorites, Bunnicula.

What makes a classic middle grade book a classic? I know I've reviewed some here, such as Watership Down, James and the Giant Peach, The Giver, and Tales of the Fourth Grade Nothing. But what makes those books classics and new books, such as Savvy by Ingrid Law, likely to be but not yet classics?

I don’t really know, but I think time has something to do with it, which is a crappy deal for writers. Classics are books that have endured over a particular period of time and if you’re an author hoping you've written a classic and your name isn't J.K. Rowling, you may have to wait to find out. Or, like so many greats of literature, your work may go on to be cherished after your death and you’ll never know about it, having died bitter and discouraged in a pauper’s grave cursing God:)

On this blog, our criteria for deciding classic-ness will be extremely simple: do I remember reading the book as a child or at least having the book recommended to me and now kids are still reading it. As the Ninja ages (closer to my own pauper’s grave every week), the books I remember reading as a child will have become even more classic. Bunnicula was written before I was born, but I remember reading it and two of its sequels, The Celery Stalks at Midnight, and Howliday Inn. Lo and behold, when I went to the bookstore for my weekly browsing session, I saw they had plenty of copies of Bunnicula for today’s readers = classic.

Truth be told, Bunnicula isn’t even that good of a book. I know that statement flies in the face of my review policy and my usual manner of only discussing positive aspects of books here, but I’m feeling feisty and it’s true. When I read Bunnicula as a kid, I didn't think it was that good and my opinion hasn't changed much. The writing is so so in places, the characters are uneven, and I would never place Bunnicula on the same shelf as The Witches by Roald Dahl, a truly classic Halloween read. But I've already told you as a child I read the sequels immediately after reading the first book and if I had those sequels here now, I’d probably give them a look.

Why? Because what Bunnicula does well, it does better than anyone. It’s fun, it’s funny, and it’s got a concept so clever the thought of it brings a smile to the face of readers everywhere. Actually, the fact that the writing in Bunnicula is so poor in places and yet the book still went on to become a classic warms the hearts of hopeful substandard writers like myself.

So what’s Bunnicula all about? A vampire Bunny! Or is he? He is. But maybe not!

Before it’s too late, Harold the dog and Chester the cat must find out the truth about the newest pet in the Monroe household—a suspicious-looking bunny with unusual habits… and fangs! I totally stole that summary from the back cover, but why reinvent the wheel. Here is the evidence as well as our first examples of uneven characters acting randomly over the top:

“Now tell me, Harold, have you notcided anything funny about that rabbit?”
“No,” I said, “but I’ve certainly noticed a lot of funny things about you recently.”
“Think about it. That rabbit sleeps all day.”
“So do I. So do you.”
“Furthermore, he’s got funny little sharp teeth.”
“So do I. So do you.”
“Furthermore, he gets in and out of his cage by himself. What kind of rabbit can do that?”
“A smart one,” I said. “I could do it.”
“We’re not talking about you, Harold. We’re talking about the rabbit. Now, where did they find him?”
“At the movies.”
“Yes, but what movie?”
“Dracula,” I said, “so?”
“So,” he said quickly, “remember the note around his neck? What language was it in?” (how does one say "so" slowly --MGN)
“An obscure dialect of the Carpathian mountain region,” I answered smugly. He didn’t know everything.
“Ah ha!” Chester said, “but what area of the Caparthian mountain region?”
Area? What’s an area? I looked at him blankly. (sort of an obvious concept for a dog familiar with the Caparthian mountain region –MGN)
“Transylvania!” he cried triumphantly. “And that proves my point.”
“What point? What are we talking about?”
“And don’t forget the white tomato! That’s most important of all!”
“But , what…”
“This book,” said Chester, disregarding me, “tells us just what we need to know.”
“What?” I practically screamed. “What does it tell us? What does this book have to do with Bunnicula? What are you talking about? What’s going on here? I can’t stand it anymore!” (***SMACK*** Get hold of yourself, Harold! –MGN)
Chester regarded me coolly. “You’re really very excitable, Harold. That’s not good for your blood pressure.”
I put my paws around his throat. “Tell me,” I said in a low, threatening voice, “or I’ll squeeze you till you pop.”

Whoa. What the heck happened to Harold there? Up until this moment, Harold has been a reasonable dog of fairly considerable intelligence. This is the only moment in the book when he nearly snaps. Otherwise, he and Chester appear to be friends. Why is he so erratic and unpredictable?

Not to worry, Esteemed Reader, I have concocted for myself an explanation. Harold is a junkie for chocolate cake and cupcakes, which are discussed throughout the novel, and the use of the word “stash” as well as the nature of Harold’s relationship with his owner tipped me off early:

Toby’s a nice kid, don’t get me wrong, but it doesn’t hurt that he shares his stash with me. It was, after all, at one of those late night parties in Toby’s room that I first developed my taste for chocolate cake. And Toby, noting my preference, has kept me in chocolate cake ever since.

Beneath the surface story of a vampire bunny is the story of a dog suffering a crippling addiction that allows him to write a novel, but not to understand the meaning of complex concepts such as “area.” And Chester the cat doesn't fair much better. Toward the end of the novel, during his crazed attempts to destroy the vampire bunny whose penchant for sucking the juice from veggies isn’t hurting anyone, Chester reminded me of the extreme members of the conservative right and I sort of wished someone would drive a stake through his heart.

I’ll stop being a jerk now. Truly, Esteemed Reader, I don’t know what’s come over me. This may be the snarkiest review I've ever written. I like Bunnicula, I do. Mrs. Ninja’s face lit up when she saw I was reading it and I know many readers have very fond memories of the vampire bunny. It’s a good book, it is.

It’s just that as a child I always felt patronized by adults who recommended it to me as a scary book. The Witches is a scary book. Bunnicula is a fun book and very good book, but it isn't scary. However, as I’m adult now and allowed to read The Walking Dead, I’ll give up this old grudge and embrace Bunnicula for what it is: a good time.

It really is a killer concept perfect for the middle grade reader: a vampire bunny that sucks vegetables until they’re white. What child wouldn't want to read a book about that? What child wouldn't love to own such a bunny? The problem is how does a writer create a compelling story around a vampire bunny if the bunny isn't a threat to anyone but produce? A writer could personify the vegetables, which would've made for a much darker, but perhaps also fun story. The Howes have crafted a mystery featuring two non-bunny, non-vampire characters around their vampire bunny. It’s a smart move.

And the book is funny. It’s hit and miss in places. As I've mentioned, the characters often act in ways only to serve the joke rather than how they might actually act, but the book is very short and the tone allows for these inconsistencies. And Chester the cat trying to pound a “steak” through Bunnicula’s heart will always be hilarious. In fact, near the end of the book, this passage made me laugh so hard I nearly cried. After reading Finding Yourself by Screaming a Lot, Chester has these words of wisdom:

That’s going to do it, Esteemed Reader. To make up for what a jerk I've been this review, I will leave you with some of my favorite passages from Bunnicula:

Now, most people might call me a mongrel, but I have some pretty fancy bloodlines running through these veins and Russian wolfhound happens to be one of them. Because my family got around a lot, I was able to recognize the language as an obscure dialect of the Carpathian Mountain region.

"You can keep smelly ol' Harold in your room, and Chester too, if you want to, but I'm going to keep the rabbit in mine."
Smelly ol' Harold! I would have bitten his ankle, but I knew he hadn't changed his socks for a week. Smelly, indeed!

At first, I thought I could strike up a friendship with Bunnicula and maybe teach him a few tricks. But I could never wake him up. He was always waking up just about sunset, when I wanted to take a snooze. A rabbit, I concluded, is cute to look at, but is generally useless, especially as a companion to dogs.


Posted by middle grade ninja at 8:47 AM