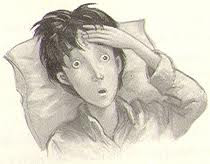 First Paragraph: Harry lay flat on his back, breathing hard as though he had been running. He had awoken from a vivid dream with his hands pressed over his face. The old scar on his forehead, which was shaped like a bolt of lightning, was burning beneath his fingers as though someone had just pressed a white-hot wire to his skin.

Welcome back to the Ninja Book Club, Esteemed Reader. Once again we are discussing one and only one chapter from Harry Potter and the Goblet of Fire. If you have thoughts on chapter three, come back next week, but today we're looking at the very boring Chapter 2 The Scar.

This chapter is by far my least chapter in the book and if I were reading Harry Potter again just for fun, I'd skim it as fast as I could and move on to the far more interesting rest of the book. But as we're painstakingly discussing Harry Potter and the Goblet of Fire chapter by chapter, I guess I'd better do some Ninja-ing:

If that sounds to you like the Ninja is channeling the great teacher, Robert McKee, you are correct. If you want to be a writer of anything (and you're here, so I'm guessing you might), you need to read Story by Robert McKee.  McKee is emphatic in his belief that every scene or series of scenes must change the value of the story. If it's a love story, every scene should bring the couple closer together or farther apart. This is a concept I have no doubt we'll be revisiting throughout these posts.

At the beginning of Chapter 2, Harry wakes up. At the end of the chapter, he goes downstairs for breakfast. In between, he does a lot of sitting and thinking. Writers, please note, in order to pull off a chapter this boring, you really need to be J.K. Rowling and writing Book 4 of the most popular children's book series in the world.

Chapter 2 is filled with riveting passages like this one:

Harry leapt up from the bed, hurried across the room, and sat down at his desk; he pulled a piece of parchment toward him, loaded his eagle-feather quill with ink, wrote Dear Sirius, then paused, wondering how best to phrase his problem, still marveling at the fact that he hadn’t thought of Sirius straight away. But then, perhaps it wasn’t so surprising — after all, he had only found out that Sirius was his godfather two months ago.

There was a simple reason for Sirius’s complete absence from Harry’s life until then — Sirius had been in Azkaban, the terrifying wizard jail guarded by creatures called dementors, sightless, soul-sucking fiends who had come to search for Sirius at Hogwarts when he had escaped. Yet Sirius had been innocent — the murders for which he had been convicted had been committed by Wormtail, Voldemort’s supporter, whom nearly everybody now believed dead. Harry, Ron, and Hermione knew otherwise, however; they had come face-to-face with Wormtail only the previous year, though only Professor Dumbledore had believed their story.

For one glorious hour, Harry had believed that he was leaving the Dursleys at last, because Sirius had offered him a home once his name had been cleared. But the chance had been snatched away from him — Wormtail had escaped before they could take him to the Ministry of Magic, and Sirius had had to flee for his life. Harry had helped him escape on the back of a hippogriff called Buckbeak, and since then, Sirius had been on the run. The home Harry might have had if Wormtail had not escaped had been haunting him all summer. It had been doubly hard to return to the Dursleys knowing that he had so nearly escaped them forever.

What!?! Who!?! Hun? Oh ***smacks lips, bats eyes, yawns*** Sorry about that, Esteemed Reader. I must've drifted off. Did I miss anything interesting? No, I thought not.

You'll remember I promised early on I wasn't always going to be Mr. Nice Ninja. Talking only about the positive qualities of a writer's work is all good and well when we're discussing a full book, but if we're going to look at this novel under the microscope, I'm going to have a hard time controlling my snark. This chapter sucks, even if it is going to be more widely read than anything I've ever written or will ever write.

The whole chapter is riddled with long-winded passages summarizing the important events from the three previous books. To be fair, the Harry Potter world is it's own unique place with a lot of rules and history the reader will be better off knowing before the tale gets going, but an exposition dump is boring no matter how great its writer.

Worse, because Rowling did it and met with success, would-be authors are sending fantasy manuscripts off to editors and agents clogged with this sort of garbage. If that's you, stop it! I may not have read your work, Esteemed Reader, but I'm going to guess you're not as good as J.K. Rowling and not even she can pull this crap without allowing her reader to lapse into a coma.

Not to be entirely negative, I will concede that Chapter 2 is a well-written exposition dump. In some ways I prefer to have it all at once and out of the way so the necessary plot summary doesn't infect later chapters. And it works because Rowling is summarizing events about stories beloved by readers and remembering them does bring a smile to one's face. So most readers will probably give Rowling a pass, but I'll bet they skim or skip Chapter 2 if it's not their first reading.

They'll probably also look the other way when Rowling does the hack's signature move and describes Harry's appearance to us by having him look in a mirror:

Harry ran his fingers over the scar again. It was still painful. He turned on the lamp beside him, scrambled out of bed, crossed the room, opened his wardrobe, and peered into the mirror on the inside of the door. A skinny boy of fourteen looked back at him, his bright green eyes puzzled under his untidy black hair. He examined the lightning-bolt scar of his reflection more closely. It looked normal, but it was still stinging.

Why, Lord? Why does this woman have a theme park devoted to her books when so many writers are unpublished?

I know why. I once stood in line at midnight with everyone else to get my book. But still...

Chapter 2 grounds us once again in Rowling's wizarding world and does its job competently, but it's by far the weakest, least interesting chapter in the book. It's telling that this chapter is not the book's first. Last week, you'll remember, Rowling dumped plenty of exposition in chapter one, but she at least had Voldemort kill a guy to hook the reader.

Meet me here next week when we'll be discussing chapter 3 in which something actually happens and yours truly will be in a much better mood.

Last Paragraph:Yes, thought Harry, that looked all right. There was no point putting in the dream; he didn't want it to look as though he was too worried. He folded up the parchment and laid it aside on his desk, ready for when Hedwig returned. Then he got to his feet, stretched, and opened his wardrobe once more. Without glancing at his reflection, he started to get dressed before going down to breakfast.