NINJA STUFF: Does Anybody Really Care About the Oscars? 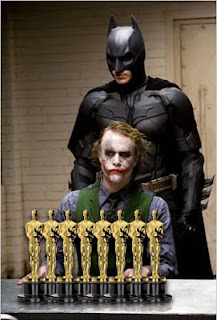 Hello there, Esteemed Reader. Are you worn out from watching the Oscars broadcast last night? Not me. I haven't watched the Academy Awards since they snubbed The Dark Knight. That was the year I decided it didn't really matter what movie won Best Picture. I still haven't seen The Artist and I'm getting by just fine. I have seen Bait, an important 3d depiction of what might happen if a group of brave tsunami survivors were trapped in a grocery store with great white sharks. In my heart, I know I've made the right viewing choice:)

When I was a kid the Oscars were a magical night. I looked forward to seeing the stars shine and I used to practice my own Best Screenplay speech in the shower. But as an adult I'm aware of two things: 1. I'm probably not destined to win an Oscar (I'm pretty sure you have to make a movie of some kind to win) and 2. I don't care about a bunch of overpaid, over-pampered celebrities handing each other gold statues and congratulating each other on being masters of the universe.

Perhaps the Ninja has grown old and cynical, but I no longer believe just anyone can grow up to be President--you have to be vetted and approved by our corporate overlords and agree to do their bidding, or else get taken out by the man on the grassy knoll. I'm more interested in regular people than celebrities. When 1% of the population controls over 40% of the wealth and one in four Americans are below the poverty line, maybe it's time to stop celebrating the rich and famous as though they're the only ones that matter.

How about a big time awards show for best teacher? Or maybe best fire fighter or best soldier? Yes, Ben Affleck has overcome some terrible acting gigs and become a fine director, but I bet a ton of money and support from powerful friends helped out in that regard. Is his accomplishment really worth the amount of hoopla bestowed upon it in light of the accomplishments of non-famous Americans?

Argo is a fine flick, Django Unchained is a better one, and at the end of the day does it really matter which one is "best?" Gandhi won best picture in 1982, but how many people honestly believe it's a better movie than E.T. The Extra Terrestrial? Not even director Richard Attenborough believed that and he made it clear, or he might not have landed the role of John Hammond in Spielberg's Jurassic Park. I say watch whatever you like and pick your own best.

The Academy Awards are an advertisement for Hollywood, and that's all good and well, but I have better things to do than watch an infomercial designed to sell me movies I probably wouldn't care to watch and the importance of people who aren't really that important. Mel Gibson is an academy award winner. How's that working out for him?

If you're wondering as I often do if there's any hope for regular Americans in a world controlled by the powerful elite, Americans who kinda, sorta still believe they're living in a democratic republic rather than a plutocracy, the answer is I don't know. But I do know if we're ever going to change things in our society, we're going to have to change our values.

So long as we pour our money and time and efforts into celebrating movie stars and athletes rather than scientists and philosophers, so long as we focus our attention on the fluff rather than the substance, bankers will continue to rob our grandchildren of their birthright with impunity and our civil liberties will continue to be stripped away in the name of fighting terrorism until we wake up in a police state.

Or maybe I just need to lighten up and accept that not everyone feels Batman deserves an Oscar:)

It's going to be a short week, Esteemed Reader. I'm up against the wall on a revision deadline and I have two critiques to deliver by the end of the week, so I haven't had time to write a Book of the Week review. We'll still be discussing chapter two from Harry Potter and the Goblet of Fire on Wednesday and we'll have a surprise literary agent on Saturday, but I'm going to have to take the rest of the week off to get caught up. My apologies to the authors waiting patiently for me to post their interviews.


Speaking of the rich being the only ones who matter, I couldn't help but notice the Academy overlooked this gem:


It makes me cry tears of laughter. How was this book ever taken seriously by anyone?

Posted by middle grade ninja at 8:49 AM