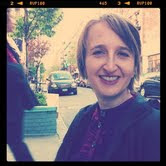 When not drinking tea and watching kitten videos, Frances Gilbert is the editorial director of Doubleday Books for Young Readers at Random House. (Confession: sometimes she does all these things at the same time.)

Prior to moving to Random House in June 2012, Frances was at Sterling Publishing for twelve years, most recently as children’s publisher. Frances has been working in children’s books since she was fifteen. She began work in her town library’s children’s department as a teenager and continued to work in libraries though university, until she started her first publishing job at Scholastic Canada in Toronto in 1994.

I had the good fortune to meet Frances at a conference and she is extremely kind, capable, and as impressive in person as her bio. Any author who gets the chance to work with her should consider themselves very, very lucky.

Any TV drama from the BBC; and any film with bonnets and corsets. Oh, and Project Runway, which I never miss.

Someone who believes in the value of every word they write and doesn't make me read a word that isn't necessary.

All I ever wanted as a kid was to be left alone to read. That pretty much sums up my job as an editor, so I am thankful every day for a career that made my dreams come true. My least favorite thing about being an editor is creating copyright pages. It bores me to tears. Sometimes literally.

Read the first page of Saul Bellow's "Herzog" and the first chapter of Rick Moody's "Purple America" and bask in what perfect writing sounds like.

I've always felt Stephen Fry and I would be best friends. I'd love to have a drink with him at the Groucho Club in London.