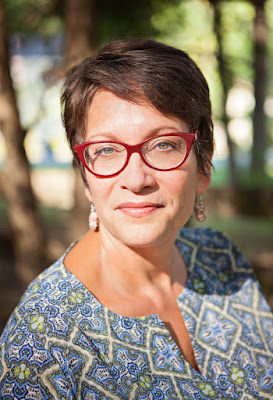 Her most recent young adult novel, Burn Baby Burn, has earned numerous distinctions including being long listed for the 2016 National Book Award and shortlisted for the Kirkus Prize. She is the 2016 recipient of the Pura Belpré honor medal for her picture book, Mango, Abuela and Me, and the 2014 Pura Belpré Award winner for her young adult novel, Yaqui Delgado Wants to Kick Your As*, which was also the winner of the 2013 CYBILS Fiction award and the International Latino Book Award. Meg also earned the 2012 Ezra Jack Keats New Writers medal for her picture book Tía Isa Wants a Car.

Meg’s other books are The Girl Who Could Silence the Wind , a 2012 Bank Street Best Book and CBI Recommended Read in the UK; and Milagros: Girl from Away. Her newest middle grade novel is Merci Suárez Changes Gears (Candlewick Press, 2018).

Meg’s work examines how cultures intersect, as seen through the eyes of young people. She brings to audiences stories that speak to both what is unique in Latino culture and to the qualities that are universal. Her favorite protagonists are strong girls.

In March 2014, she was recognized as one of the CNN 10 Visionary Women in America. In November 2014, she was named one of Latino Stories Top Ten Latino Authors to Watch.  In 2017, she was named, along with Gigi Amateau, to the Southerners of the Year list by Southern Living Magazine.

When she is not writing, Meg works on community projects that support girls, Latino youth and/or literacy. She lives with her family in Richmond, Virginia.

Oh boy, this changes all the time as I read new books by exciting new authors.

For voice: One Crazy Summer by Rita Williams Garcia


For all around impact on me as a person:  Charlotte’s Web by E.B. White and The House of Mango Street by Sandra Cisneros

It fluctuates, of course, but words are at the center of how I move through the world pretty much all day long. I read the paper and have coffee every morning in my quiet kitchen for about 30 minutes, and I end the day by reading in bed every night for about an hour – unless the book is fabulous and then I read until I physically can’t do it anymore.

In my daytime hours I am writing, writing, writing.  Sometimes it’s up to four hours of composing a new work or editing it. Sometimes it’s writing answers to Q and A requests or writing a blog post for my own site or someone else’s. At times, I’m reviewing work for different publications. It’s all about words and books, though.

The short answer is yearning and a sudden, reckless decision. It took me a long time to decide to take the risk and try to write a novel. I lacked the courage to try my hand at a career that felt so difficult to break into.  I’d been a teacher, and later, a freelance journalist where I wrote for magazines and   newspapers. The last job I had was writing press releases and printed materials for a school that served kids with learning disabilities.All were terrific jobs, but none of that felt exactly right.

So, on my 40th birthday, I stood up and quit my job at that school, deciding that my career in writing was now or never. Luckily it worked out for me. I wrote the novel for about a year, and then searched for an agent with my copy of The Writer’s Digest Guide to Chidlren’s Literary Markets, a process that took about six months. After that, I began publishing books pretty regularly.

I think it depends what you mean by writers.  I think we can absolutely teach people to be competent writers who can get their thoughts on a page in a way that’s engaging and memorable. But writing with a capital W, the writing of books that become part of the children’s canon and that move readers for generations….that I think does take a special kind of person who comes with certain gifts or leanings.  It’s someone with not only the eye for detail and the ability to turn phrases, but also a person who has the heart for understanding people at their best and worst.

My favorite thing is when the characters that have been living inside of me start to feel real not just for me, but for readers. The feeling of connection is so powerful.

My least favorite thing is all the self-doubt that happens as you’re drafting, all those days when you’re sure you can’t do it, when you’re positive that you’re a hack, that this will be your worst book ever.

Great writing has swing; it’s intuitive and springs from your emotional truths more than from your technical skills. So, yes, spend as much time as you can reading the very best books and studying them to improve your craft. But don’t forget to invest just as much time going inside your own memories and mining your own experiences to rediscover who you were as a kid and what that kid from long ago has to say about growing up now. Say things the way you truly feel them.

I’d want to have lunch with Sandra Cisneros.  So many of us Latinx writers are, in fact, standing on her shoulders. She named us in her writing. She drew our families as we were in our beauty and despair. She pointed the way on how to make our bicultural lives visible in books and in doing so opened the door for so many of us who followed. And for that gift I am forever grateful to her.