GUEST POST: "A Very Serious Disclaimer for 'HAIR IN ALL THE WRONG PLACES'" by Andrew Buckley 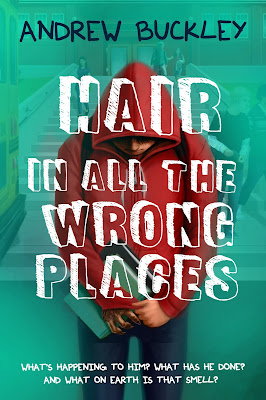 HAIR IN ALL THE WRONG PLACES is a new book from the slightly unhinged mind of Andrew Buckley. Be warned, it’s not a safe book; in fact it’s potentially quite dangerous. As described in the opening disclaimer:

I don’t want to get too scientific here, but there are a few things you should know before you sink your teeth into this book. I’ve tried to keep it simple enough that anyone twelve and up could read and understand it. Werewolves were everywhere in Europe in the late sixteenth century. Go to a party, there would be a werewolf. Go to work, you’re probably working next to a werewolf. Bump into a stranger on the street—werewolf!

They were slowly killed off in Europe as the true nature of a werewolf is a terribly hard thing to control. Eventually you get that urge to eat someone. And let’s face it; eating people is just rude.

Now here’s the scary bit, the bit that concerns you. While werewolves ceased to be a part of the world, they didn’t necessarily leave it. On the contrary, humans evolved to repress the werewolf gene out of the fear they would be decapitated, shot with a silver bullet, burned alive, or a terrifying combination of all three. What this means is that every single human being is still carrying the werewolf gene. You, right now, sitting right where you are, have the werewolf gene swimming around somewhere inside of you.

Genes are strings of DNA. DNA makes you who you are. You have that werewolf gene inside you. It’s just not active. Not yet.

To fully activate that werewolf gene, you’d have to be bitten by another werewolf, someone who turns into a giant wolf-like creature when there’s a full moon. So fear not! As long as no one has bitten you recently, you’re likely okay.

So why this warning? You’re probably thinking there’s no chance I’ll turn into a werewolf because I haven’t been bitten. That is absolutely true. However, while it’s impossible to turn into a werewolf unless you’re bitten, it is very possible to awaken that sleeping werewolf gene by learning too much about them. This book will teach you a lot about those hairy creatures of the night, so I want you to be extra careful while reading it.

If you notice any of the following things, stop reading immediately:

- You find yourself looking at other humans and thinking lunch.
- You start to notice smells you never smelled before.
- You growl at people instead of talking to them.
- Your nails begin to grow at an alarming rate.
- You scratch your head in public using your leg.
- You greet your friends at the bus stop by sniffing their butts.
- You begin to grow hair in all the wrong places.


Did you read this and think that’s nothing but a bunch of ridiculous mumbo jumbo? Well, why not find out for yourself . . . pick up a copy and see how it affects you. I dare you! No, I double dare you!

Andrew Buckley attended the Vancouver Film School’s Writing for Film and Television program. After pitching and developing several screenplay projects for film and television, he worked in marketing and public relations, before becoming a professional copy and content writer. During this time Andrew began writing his first adult novel, DEATH, THE DEVIL AND THE GOLDFISH, followed closely by his second novel, STILTSKIN. He also writes a spy thriller series under the pen name ‘Jane D Everly’.

Andrew also co-hosts a geek movie podcast, is working on several new novels, and has a stunning amount of other ideas. He now lives happily in the Okanagan Valley, BC with three kids, one cat, one needy dog, one beautiful wife, and a multitude of characters that live comfortably inside of his mind.

Andrew is represented by Mark Gottlieb at the Trident Media Group.

What has he done? What's happening to him? And what on Earth is that smell? For Colin Strauss, puberty stinks. Blackouts, hallucinations, and lapses in memory are the perils of growing up werewolf. Worse than that, Colin worries he might have had something to do with the recent attacks on the townspeople. He may have eaten a person. It doesn’t matter that it’s someone he doesn’t particularly like. What kind of boy goes around eating people? Foolishly, all Colin can think about is how Becca Emerson finally kissed him for the first time. Yep, hormones are afoot. Yikes! But girls will have to wait. Collin better get himself under control before someone else ends up hurt or worse . . . dead.

Posted by middle grade ninja at 9:10 AM