John Claude Bemis and I talk about a little bit of everything: art, music, elementary education, and, of course, literature. He gives a preview of his class on revision in the second half of our conversation that every writer should hear and shares some fantastic tips for creating a great first draft. We also talk a lot about Pinocchio and his unique twist on the classic tale in his Davinci-Punk series OUT OF ABATON, focusing on the first book, THE WOODEN PRINCE.

An inspiring speaker and entertaining performer, John Claude Bemis is the author of The Wooden Prince, Lord of Monsters, the Clockwork Dark trilogy, The Prince Who Fell from the Sky, and Flora and the Runaway Rooster. He received the Excellence in Teaching Award from UNC Chapel Hill’s School of Education for his work in the schools as an author-educator and served as North Carolina’s Piedmont Laureate. John lives with his wife and daughter in Hillsborough, NC. 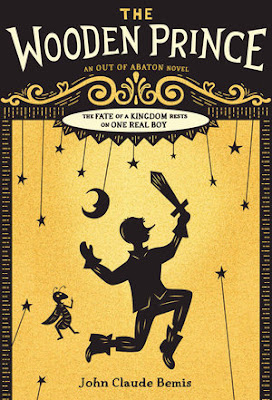 The automa Pinocchio has always been duty-bound to serve in the floating palace of Venice's emperor. So when Pinocchio finds himself locked in a trunk and delivered to a new master-a wanted criminal and alchemist named Geppetto-he is curious about everything around him. But most curious is the way Pinocchio seems to be changing from a wooden servant into a living, human boy. Before Geppetto and Pinocchio can uncover the mystery surrounding the automa's transformation, Pinocchio is stolen away. Determined to find Geppetto again, Pinocchio begins a harrowing journey across the Empire, where danger in the form of half-beast outlaws and winged airmen abounds for a lost automa.

Meanwhile, Princess Lazuli, the daughter of the ruler of a magical kingdom called Abaton, is also on a quest through the emperor's territory. Her father, Prester John, has been captured by the Venetian Empire, and Lazuli is desperate to rescue him. With the emperor's airmen closing in fast, Lazuli learns the only hope for saving her father — and her beloved home — lies in Pinocchio and Geppetto.

Posted by middle grade ninja at 8:57 AM