GUEST POST: "Researching for Truth in a Tale of Fiction" by Charlotte Bennardo 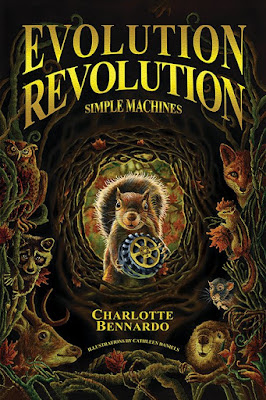 Have a great idea for a middle grade novel? Why not just slap those words down, polish it a bit, and send it off?

Wait, have you done your research?

Just because you’re writing a fantasy/animal/adventure/whatever story doesn’t mean there’s no research. If anything, you have an unspoken obligation to be as factual as possible because you’re writing for readers who may not know fiction from absurdity. My middle grade adventure series, Evolution Revolution (Book 1: Simple Machines, Book 2: Simple Plans, Book 3, Simple Lessons), isn’t simply a story about a smart squirrel who learns things. How could I know what a squirrel is capable of and plan the story if I didn’t research animal behavior, habitat and biology?

We know squirrels live in the woods. Did you know they live in meadows too? The common gray squirrel, which lives in the woods, doesn’t particularly like the red squirrel which prefers meadows. One is a tree dweller, the other makes its nest in a hole in the ground. This dichotomy set up a rivalry between my main character, Jack, a gray squirrel, and a meadow squirrel, Jerk, his sister’s mate. Essentially, squirrels are found all across the world except in the most extreme deserts and the Arctic. If more novels follow, it’s possible for Jack to move all around the world. Hmmm.

Do you know how many different types of squirrels there are? About 285 species. There are red, black, the rare albino, the flying squirrel, and ground squirrel; some with large tufted ears or distinct fur patterns like a Siamese cat. They are related to groundhogs, prairie dogs, chipmunks, and woodchucks. Think of the possibilities for clashes, alliances, change of settings…

Who remembers everything from high school biology? I retained only a basic knowledge of the simple biology of animals and plants in the woods, enough to form a very broad idea of what I wanted the story to be about, but good writing is in the details. Time to refresh, and learn. What do they eat? Squirrels are generally herbivores, but sometimes eat bugs and small animals. (Gross factor alert: Jack eats any fleas on his fur. Do you know they pop when they’re eaten? And do you want to know how I know?). Berries are a favorite treat of squirrels, as are mushrooms and they hoard this treat especially; they drag them into their nest where they dry out and can be eaten over the winter.

Research also taught me that there are behaviors which make for a good story. Jack and Sister argue over food - which is natural. Chipmunks, a distant cousin, and other squirrels will raid a squirrel’s store. Can you imagine a chipmunk and a squirrel fighting over a buried nut in the woods - is it ‘Finders Keepers,’ or ‘I buried it, it’s mine’? Ah, my research was loading me up with all sorts of conflicts and plot lines which I would have missed - had I not done some investigating.

Throughout the series, Jack learns about simple machines - the wheel, axle, inclined plane, etc. through a young boy. Is a squirrel capable of learning such things? Yes! A squirrel will spend over a month solving a puzzle (like how to outwit ‘squirrel-proof’ birdfeeders) if food is involved. Watching a BBC special about a man who tested how smart these dear little rodents are, I found out that not only do squirrels share what they learn with others close to them, they figure out how to cheat the puzzle - they figure out shortcuts. Just a few hours of research set up my series for twists and turns that I wouldn’t have dreamed of otherwise. 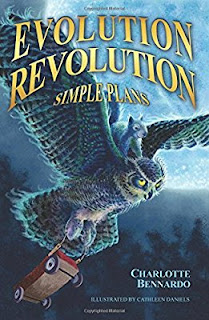 Since Jack learns simple machines (this idea came from my middle son’s third grade homework assignment), I had to re-learn what constitutes a lever, and make it ‘accessible’ to a squirrel. They have finger-like claws, but they don’t have the strength or dexterity of a human or even a raccoon. In the second book, Evolution Revolution: Simple Plans and the final one, Evolution Revolution: Simple Lessons, the tasks had to be ones that a squirrel could accomplish, so I had to simplify the science (which makes it easier for kids to pick up without them realizing it). And the science had to be factual because I’ve based it on the school curriculum; teachers and kids would pick up on anything that was fudged.

Don’t skimp; read more than one book. Search for documentaries, articles, even social media videos are a treasure trove (YouTube can suck you into a void of watching funny squirrel videos). When you see the amazing things they can do… my stories don’t seem like fiction at all. I watched Facebook videos from Alexandrea Weis, a writer friend who rehabs hurt animals. She has deep knowledge of squirrels (which she releases back into the wild) and raccoons, which helped immensely for the final book, Evolution Revolution: Simple Lessons, where a raccoon jumps into the war against the humans. Those critters are super smart, always greedy for food (her pet raccoon Rodney loves Rice Krispie treats), and quite dexterous. He also gets into a lot of trouble. She and her videos answered my questions and gave me an insight into the darling, humorous, but very mischievous, creatures.

Doing the research before you plot out the story will allow you to go in directions you might never have imagined (and that’s great! If you couldn’t have imagined it, it should be unique, right?), and it will give depth and substance. A tale of fiction draws and holds readers when they read tidbits of truth - we all know foxes chase squirrels, and we know that squirrels can leap from tree to tree, so, when I throw in a scene where Jack stops construction machines from cutting down his woods, you’ll believe me. 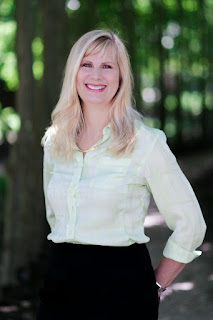 Charlotte Bennardo is the author of the new middle grade series: Evolution Revolution, Book 1: Simple Machines (October 2016) and Book 2: Simple Plans (January 2017), Book 3: Simple Lessons will release in May 2017. She is also the co-author of the Sirenz series (Flux) and Blonde OPS (Thomas Dunne Books), hailed as “funny and entertaining” by Booklist. She resides in New Jersey with her family, and is currently hard at work fighting for chair space with her cat as she works on her next project. 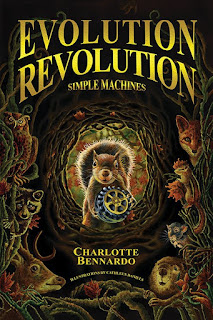 In a quiet wood, a gray squirrel declares war on the machines that invade his wood, threatening his nest and tree. Taught words and how to use simple machines like the wheel by a young boy who names him Jack, the squirrel shares what he's learned with the other animals.
Jack thinks he can stop the bulldozers, if he can convince the other woodland animals to join him in the fight. But as they take on the humans and their machines, people are noticing that Jack and his friends are smarter than ordinary forest animals. All of them are in more danger than they realize. Even if Jack and the animals win the battle, will they lose the war?
Evolution Revolution is a smart and charming book for younger readers that will have them wondering just what the animals in the yard are up to! Watch for the next book in this series coming soon

Posted by middle grade ninja at 11:40 AM