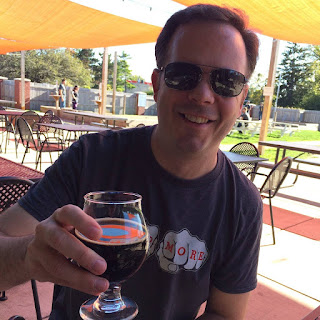 Jerry Gordon makes stuff by making stuff up. He is the author of the apocalyptic thriller, Breaking the World.

He is also the Bram Stoker and Black Quill Award-nominated co-editor of the Dark Faith, Invocations, and Streets of Shadows anthologies. His short stories and essays have appeared in numerous venues, including Apex Magazine and Shroud.

When he's not writing and editing, he runs a software company and teaches. You can find him blurring genre lines at jerrygordon.net and on Twitter @jerrylgordon.

I don’t know that I could pick three favorites. I might be able to put together a top twenty if you didn’t hold me to a specific order. How about three books that occupy a special place in my heart?

On an average weekday, I write for 2-3 hours and read fiction about half as much. I like to write early in the morning when I'm fresh and distraction free. If I wait, a thousand things conspire to rob me of the time. Reading, on the other hand, weaves its way throughout my day. I read at lunch and bedtime and listen to audiobooks in the car and gym. I try to stay away from weekend writing when deadlines allow. That's family-first time.

Like most, I started writing novels in a vacuum. I didn’t know other writers or have any sense of how the craft and business worked (outside of a handful of outdated and sometimes misguided books). The path to publication, for me, started with attending professional writing conferences and workshops. I quickly found my "writing family" and started to learn how the business worked.

I set aside my early attempts at novels and refocused on short fiction, which is a great way to accelerate your craft. Then I co-edited several high-profile anthologies with fellow writer and editor, Maurice Broaddus. The first of which, Dark Faith, was nominated for a Bram Stoker Award. I took all those lessons back to writing long fiction.

My debut novel, Breaking the World, was released in April by Apex Publications.

I've met a small minority of writers that seem naturally gifted, but most of us have to work at it. I always felt like a natural storyteller that had to learn the craft. Ideas and structure come easy to me. The line-by-line trench warfare of writing a novel took a lot of effort. There aren't many shortcuts. You learn by doing.

I love being a generalist. I'm interested in just about everything, and writing gives me an outlet to explore the world without committing to a specialty. I've researched cults, government black sites, digital privacy, artificial intelligence, pandemics, missile dispersal patterns, and a host of other topics that have me on a government watch list somewhere.

My least favorite thing? Live promotional interviews. Between anthologies and novels, I've probably done a hundred of them (and enjoyed half a dozen). I almost always feel like a pretentious tool talking about myself and my work. It doesn't help that I'm a perfectionist and live interviews are rarely perfect.

Study the stuff you love. Pick apart and try to fix the things you don't. Develop a sense of what works for you and other people. Then read things and write things and talk to people that shatter your preconceptions. There's no shortcut. Becoming a writer is like becoming a person. It's the journey that makes you.

Lunch with a writer is a pretty boring thing. How about dinner and drinks? There are so many amazing choices: Twain, Bradbury, Dickens... If you pressed me, I'd pick Shakespeare. We know so little about him as a person, and most of our preconceptions are a byproduct of four hundred years of literary criticism. I'd love to meet the man behind the work, the starving and uncertain artist. We could have a few too many pints and talk writing and life well past the chimes of midnight.

jerrygordon.net
Posted by middle grade ninja at 8:57 AM