Book of the Week: FINDING CHANCE by Linda Benson 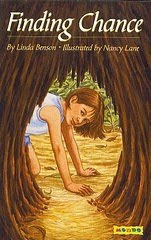 It’s to be another little girl and her beloved animal story this week, Esteemed Reader. The-child-and-their-beloved-animal story is almost its own genre, like the buddy cop story, but usually not as many people get shot (animals, not so much). Some classics in this subgenre include Where the Red Fern Grows, Charlotte’s Web, and The Old Man and The Sea. Wait. Scratch the last one. There are many variations as to how writers have handled these stories, but the best put their focus on the humans and how their relationship with the animal impacts their life and relationships with other humans (assuming the animal in question isn’t a human-like main character such as Garfield).

The bigger the impact made in the protagonist’s life, the more significant the protagonist and animal’s relationship is. Hooch isn’t just Turner’s dog pal, he helps him solve crime, find love, become less neurotic, and so on. If ever you find a story that focuses on the animal’s life rather than the human’s, I can pretty much guarantee that animal has mostly human characteristics and is a variation on Garfield (like Wilbur in Charlotte’s Web). Books are written and read by humans and so this is a prejudice that is unlikely to change.

Meet Chance, the animal half of the animal/human relationship in Finding Chance, which is a wonderfully charming book you’re going to love. Chance is a lonely dog. There is no one to feed her or take care of her and she is forced to live inside a tree, scrounging for food and depending on the occasional kindness from strangers. One day she meets Alice, a twelve-year-old girl, who does nice things for her. Chance’s quality of life improves. Imagine that this, and only this, were the plot of Linda Benson’s novel. Would anyone be interested in reading it? It might work as a picture book, but I doubt such a story would resonate with many readers in a full length middle grade novel.

Now take this version of the story: Alice is a lonely girl who just arrived in Fox Creek California with her mother. She becomes friends with Heron, a local girl. She discovers Chance and takes care of her. This version of the story is better than the one in the previous paragraph because it’s about a human who is lonely and takes actions to end her loneliness, as opposed to a dog getting it’s day by mere chance, so to speak. Even so, this more human-centric story is still missing something.

Oh, we can add in details. Alice is a poet. Her mother is working on a novel and is often too busy for Alice (I wonder if there’s any autobiography in that). Alice loves books. The local librarian is a nice man who might be interested in dating her mother. As interesting as all of this is, it isn’t a story until a character has a goal, takes steps toward it, faces an obstacle, and is changed by the event.

Benson knows this, of course--she’s quite talented :) --and around the edges of her central story of a lonely dog and a lonely girl finding one another, she builds the true conflict of Finding Chance. I’m not going to give the whole thing away, but the final confrontation in this book is between Alice and her mother and it will move the reader. Alice’s relationship with the dog informs and finally forever changes this larger and more fundamental human relationship in a way that resonates on an emotional level. Only once this occurs does Finding Chance become a story about a greater universal truth that readers can relate to. And Chance’s life improves as well, so take heart animal lovers, it’s not all about the humans—just mostly.

The only other thing I want to examine about Finding Chance is its chapter endings. Finding Chance has 21 chapters and is 112 pages long, making for an average chapter length of 4-5 pages. Even so, Benson finds a way to end every chapter on a point of interest to ensure her readers turn to the next page without delay.

Here is a fantastic post from Linda Benson’s blog in which she discusses manuscript notes from her agent. Her agent, Joanna Volpe’s advice: “Amp up chapter endings. Don't succinctly close each chapter. Instead, ask a question, introduce a new complication, make us wonder, so that we cannot turn off the light and go to sleep, but Have. To. Keep. Reading.”

See if you can spot that advice in play in the following chapter endings from Finding Chance:


1. She climbed the broken concrete steps, pushed open the heavy door, and went inside.
2. ...Alice heard something. It rustled in the underbrush behind her, as if ready to leap out at any moment.
3. She cupped her hands to her mouth and hollered down the tracks. "A big train isn't going to come roaring down on us, is it?"
7. The hair prickled on the back of her neck-an eerie feeling. Something darted quickly in front of her and jumped into the thick underbrush to hide.
11. Rustling around in the knapsack for a sandwich, she blurted out a question before she could stop herself. "Mom, am I adopted?"
16. "...He says he's going to call the pound pretty soon if someone doesn't claim her (Chance--MGN)."
18. Bracing herself against the howling wind, she stepped out of the warmth of the cabin and into the relentless rain.
19. She looked up ahead for the trail. All she could see was darkness.