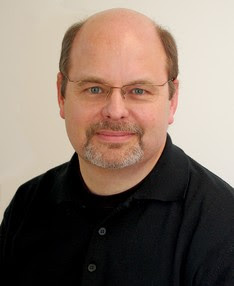 John Gilstrap is the author of Nathan’s Run, At All Costs, Even Steven, Scott Free, and No Mercy. He is also the coauthor of Six Minutes to Freedom and The Chopin Manuscript. Here is a quote from the biography section of his website: “My first novel, Nathan's Run, was in fact my fourth novel, and when it sold, it sold big. At a time in my life when things were going well—I was president of my own consulting firm—things were suddenly going very well. Warner Bros. bought the movie rights to Nathan's Run two days after the first book rights were sold, and as of this date, the novel has been translated and published in one form or another in over 20 countries. With Nathan's Run in the can, as it were, I thought I might finally be on to something, but I didn't quit my "day job" until after I sold the book and movie rights to my second novel, At All Costs. I figured that while one-in-a-row might be luck, two-in-a-row was a trend. So, I started writing full-time.” I've met John Gilstrap and he is very generous with his time and knowledge when it comes to aspiring writers.

Impossible question to answer. I love too many books for too many different reasons. Three among my favorites are:
TO KILL A MOCKINGBIRD
'SALEM'S LOT
THE DAY OF THE JACKAL

I probably average two to three hours a day writing and another two reading.

Like any path to success in an artistic endeavor, mine was a circuitous one that involved hours and hours of writing bad stuff that became gradually better. Even as a kid, I wrote constantly; it was the only skill I was good at. It's what I was known for in high school, and then in college--among my academic peers--I found out that I wasn't as good as I thought I was. (Actually, maybe it's better stated that my new peer group was at least as good as I was, and in many cases better.) I've never been interested in finishing second, so I continued to push myself. After college came grad school in a technical field, and despite a full-time job and academic obligations, I still wrote. Finally, I completed a story that I really liked, and I got an agent, and my agent sold the book. After that first sale, things get easier.

I think that the ability to tell a story is something you're born with. It's an artform that requires you to see the world a little differently than other people see it. Writers find significance in every day details that other people miss. That said, I think the physical elements of committing those thoughts and observations to the page are entirely learned.

Favorite thing: Reading a book I've finished and feeling satisfied that I got it right.

Least favorite thing: The blinking cursor on the first page of a new project.

I think dinner with Edgar Allen Poe would be a truly memorable experience.