Book of the Week: MANIAC MAGEE by Jerry Spinelli 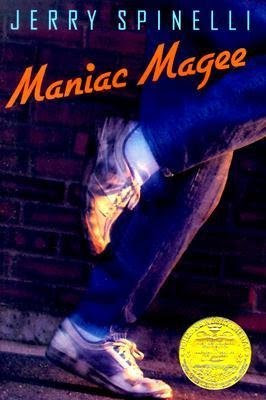 As a kid, I figured everybody knew it was a party foul to hate somebody for their skin color—that was something people used to do back in the days of Abraham Lincoln, but which had since been neatly resolved somewhere in there. As a white boy living in a small Indiana town of almost all white people, I could afford to think this.

Still, I believe I did have a valid reason for my prejudice against books dealing with race. Reading a book about race relations is often like reading a book one is given at church; it’s a safe bet that the final scene of that story will show that doing the right thing and trusting in God is the way to go just as you can bet that if a middle grade book written in the last twenty years brings up the subject of race, it’s likely to point out that racism is wrong.

Well, of course racism is wrong. The sky is blue, the grass is green, and so on. I have been forced to read so many bad books repeating this true, but uninteresting mantra, I have little tolerance for any book that merely reinforces the obvious fact. I submit that after years of such books being thrust upon children, a middle-grade book would almost have to argue in favor of racism to be the least bit fresh (please, no one actually write such a book).

Don’t get me wrong. I’m all for more books featuring multicultural characters and I have a vested interest in books featuring interracial families like mine. It’s just that the authors of such books need to say something more provocative than “racism is wrong.” On the other hand, given the way a certain part of the country has behaved since Barrack Obama was elected president (I’m not talking about policy disagreements), maybe we really do need more “racism is wrong” books—some folks are just slow learners, I guess.

In Maniac Magee, Jerry Spinelli does indeed successfully argue that racism is bad. But that’s not why he won the John Newberry Medal and that’s not why I’m going to recommend his book to you. I’m going to recommend Maniac Magee because it is first and foremost a fun story staring a very likeable character. Spinelli’s got jokes, so you’re going to have a good time, and the book has none of that heavy-handed-after-school-special quality of lesser books dealing with race. More, Spinelli writes description like none other, but more on that in a minute.

There are two great works I’d like to mention in comparison to Maniac Magee: Othello and Adventures of Huckleberry Finn. Both works feature racism as a motive for characters and as a vehicle for theme, yet speak beyond the mere platitude of racism = wrong.

In Othello, Shakespeare is less interested in the fallacy of racist thinking than he is in the fallacy of compositional thinking, defined as assuming the characteristics true of one part of a group are true of a group entire (not true, but the basis of racism, sexism, and the list goes on forever). But Shakespeare uses racism only to illuminate this larger truth, and almost the entire text of Othello concerns itself with faulty thinking by nearly all of the characters, including Big ‘O’ himself. In Huckleberry Finn, racism is again a symptom of a much larger trouble with life in America.

The story of Maniac Magee is thus: Jeffrey Magee’s parents die so he goes to live with his aunt and uncle. They hate each other to the point of not speaking, but they’re die hard Catholics so they stay married. They live on separate sides of the house and Jeffrey lives between them until he can take it no more and he yells “Talk! Talk, will ya!” That’s more or less the theme of Maniac Magee.

Jeffrey runs away from home, lives in various places including the zoo. But more importantly, he lives with a black family, and then a white family. He hears each talk about the other and realizes that it is their ignorance of one another that makes them afraid and separate. They are the metaphorical aunt and uncle now and Maniac Magee cannot live among either family until they TALK. Therefore, what might have been a simple “racism is wrong” story becomes a story about an even greater, more universal truth.

Whew. I know this review is too long, but the last thing I have to tell you is that Spinelli is somebody to read if you’re looking to hone your descriptions to picture perfect. I can’t possibly list all of the great sentences I highlighted in my copy, but I want to share with you a few of his descriptions of a single location. See how effortlessly he depicts this place in so few words:

“Despite the cold, the front door was wide open, and Maniac could smell the inside before he could see it. The first thing he did see was a yellow, short-haired mongrel looking innocently up at him while taking a leak in the middle of the living room floor...


…Cans and bottles lay all over, along with crusts, peelings, cores, scraps, rinds, wrappers—everything you would normally find in a garbage can. And everywhere there were raisins…


…The hole in the ceiling was so big they both (two young boys—M.G.N.) could have jumped through it at once…


…The raisins here were even more abundant. He spotted several of them moving. They weren’t raisins; they were roaches.”

Wow. I think retyping those sentences may have made me a better writer.