Book of the Week: MELVIN BEEDERMAN SUPERHERO: BROTHERHOOD OF THE TRAVELING UNDERPANTS by Greg Trine 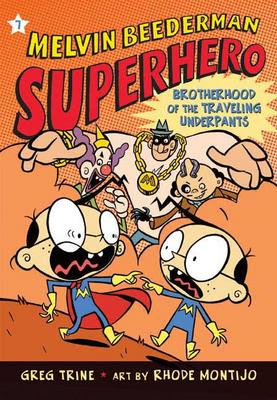 This opening will make more sense to you after you’ve read your first Melvin Beederman Superhero novel, Esteemed Reader, as it is my imitation of a gag Greg Trine repeats often to great comic effect. And you should read one or two or all of the Melvin Beederman novels. I’m planning to. I just discovered Melvin Beederman a couple of weeks ago and I think I’m in love. I only wish I had found him sooner. Say when I was about seven or eight. That would have been just about the perfect time. Of course, now’s good too.

As you may have intuited, Esteemed Reader, Melvin Beederman is a superhero. He went to Superhero Academy where he received Noggin’ Power. He lives in a tree house overlooking Los Angeles, the city he is sworn to protect from dastardly villains such as Goofball McCluskey, Max the Wonder Thug, and Calamity Wayne. These three form the Bad Guy Brotherhood and as you may also have intuited, they are up to creating bad trouble for Melvin.

When they get their hands on a time machine—they actually just buy it from Big Al’s Rent-a-Lair (he also sells evil lairs)—the Bad Guy Brotherhood zooms back through time to attack Melvin when he was still at the academy learning to use his powers and therefore, they might have a chance at defeating him (not really). So, of course, Melvin Beederman and his sidekick Candace Brinkwater dress up as pirates, procure their own time machine, and race back to the fut—past—to save younger Melvin. Will they be able to stop the evildoers in time (in time)?

There’s not much point in my reviewing this book further. It’s a middle grade novel (the ninja’s favorite kind) about superheroes (the ninja’s favorite subject) featuring an interracial friendship at its center without ever making a big deal about it (the ninja is in an interracial marriage and loves this), and it’s hilarious from start to finish (the ninja also loves to laugh). Melvin Beederman had me at “hello.” I love this book and when I one day have little ninjas stealthily running under foot, I will read it again with them.

So, that being said, let’s take a look at what makes this, Brotherhood of the Traveling Underpants, the seventh book in a series a success (a writer doesn’t get to book seven unless book one through six sell after all, so there must be something here worth paying attention to). I believe that it’s Trine’s use of humor that has sustained this stories and that’s worth examining.

A brief (sort of) aside: when I was in college, I took a course on children’s literature—of course, I did. They couldn’t keep me out of that class. I’ll never forget that our professor (who we called The Highlander because he was so old), when comparing two books we had read was quick to point out that The Bridge to Terabithia (a great book, no question) was deep and meaningful and important, and that Harry Potter and the Sorcerer’s Stone was merely clever. I could rant about this sort of book snobbery all day. It’s the same ridiculous thinking that led some book snobs object to Stephen King, the world’s best-selling novelist, winning The Distinguished Contribution to American Letters (as though it should automatically have gone to some obscure “literary” writer with a fraction of King’s sales).

I don’t know where this sort of snobbery comes from, but it pervades most of our arts. Somehow Slumdog Millionaire (a decent flick) wins the Best Picture Oscar and The Dark Knight isn’t even nominated, which is why I’m done with the Academy Awards. Snobbery is all well and good for movies. Hollywood has enough pervading commercial exposure that they can afford to discriminate.

Books, on the other hand, even the absolute biggest and best, often struggle for reader attention. We writers cannot afford not to support one another. And yet, paradoxically, so much of writing about writing is devoted to praising only the most obscure, inaccessible fiction. Fiction reviewers will lament that too many Americans don’t read and then recommend only books that most people would never want to read.

And in school, teachers who read those reviewers try to encourage kids to read, but then force upon them The Scarlet Letter or Wuthering Heights, two books that, yes, are very good, but are also not much fun for high school students. Oh how many more students might be more inclined to become lifetime readers if in addition to The Canterbury Tales they were also given some James Patterson or John Grisham to emphasize that in addition to being intellectually stimulating, reading can also be just plain fun.

Melvin Beederman Superhero: Brotherhood of the Traveling Underpants is fun, and that’s not a dirty word. I can’t imagine ever reading a Melvin Beederman novel in which Melvin struggles with cancer, discovers the darker nature of his soul, or meditates on the futile struggles of humanity in a bleak world. Melvin isn’t likely to learn that Candace has fallen from a tree bridge to their imaginary play place and died (she can fly, after all) and that is a good thing. There’s nothing wrong with that sort of story, but there’s also nothing wrong with not being that sort of story.

I believe a large part of Greg Trine’s motive in writing Melvin Beederman is to show the reader a good time and that is a pure motive, as good a reason for writing a novel as any. Young readers will devour Melvin Beederman because he’s fun. For example, when Melvin and Candace are knocked from the sky, they land in Nacho’s Amazing Reptile Show and Cactus Farm. Hilarious! Also, all villains wear dirty underpants because they know superheroes have x-ray vision and are hoping to gross them out. Classic!

Trine’s story doesn’t take itself too seriously. Here is an actual excerpt: “’This is going to be easy’… But the narrator can’t say if it’s going to be easy or not. That would give away the story.”

Don’t get me wrong. At the heart of Melvin Beederman Superhero is great characters in a story well told, even if it is a silly story and, well, childish. It’s a book for children! Of course it’s childish and it’s fun! It’s clever, yes, but it will also accomplish something too many deep and meaningful and important and whatever-other-hyperbole-you-like stories won’t: it will attract readers.

More, readers will enjoy the experience of laughing and being entertained and having fun and they will come back for book eight. I know I will.

Posted by middle grade ninja at 5:55 AM