Book of the Week: WHIRLWIND by Alison Hart 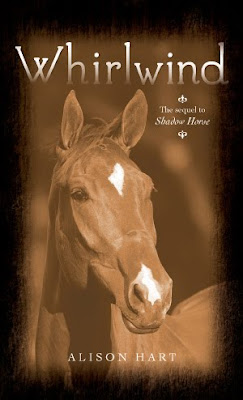 To be fair, Whirlwind is actually a book for teens, or a young adult novel, or possibly even a tween novel. Some of you may remember that a few weeks ago we discussed Emma’s River, a middle grade novel by Alison Hart. If you don’t remember that, here’s the link.I’m trying to leave YA books to the Young Adult Ninjas out there, but I thought reading both types of books by the same author might provide a nice discussion for the differences between the two genres (as though I needed an excuse to read a new Alison Hart book).
Unfortunately, trying to pin down exact definitions of middle grade or young adult books is like trying to pin down the exact definition of a literary novel. Everybody knows what you mean, but no one has a definition that is exactly like anyone else’s. I’ve read varying estimates, but generally a MG novel is 25-60,000 words and a YA novel is 50-90,000 words, and a J.K. Rowling novel is as long as she says it is. MG novels star characters that are 10-14 years old and YA novels star characters that are 13 to 19 years old. MG novels typically watch their language, have no sexual content, and usually steer clear of drugs and alcohol. YA novels can follow similar guidelines, or they can throw them out and write as filthy a book as they like (lucky!). For such a book, check out Courtney Summer’s brilliant Cracked Up To Be.

Now then, even as I write these very loose definitions, I am sure someone will be planning to correct me in the comments section (please do). Better book fans than I have tried to set definitions and failed, so let’s just talk about the books at hand.

The protagonist of the 263 page Whirlwind is thirteen year-old Jas Shuler (which makes this an early YA, perhaps even tween). The protagonist of the 142 page Emma’s River was ten year-old Emma Wright. Both girls love animals, horses in particular. Emma was outraged that her horse, Twist, was being mistreated by deck hands on the steam boat. Cruel social circumstance separated Emma from Twist and she spent the novel fighting to reunite with her horse. Jas is outraged that her horse, Whirlwind, is being mistreated by cruel race horse insurance scammers. Jas spends the novel fighting to reunite with her horse. I don’t mean to suggest that the books are the same, only that there are clear similarities.

And why wouldn’t there be? The same fantastic writer is responsible for both.

But still, it’s worth noting that ten is too young for snogging in books and thirteen is perhaps acceptable for snogging. Not that Alison Hart has much interest in devoting much of the book to romance, as evident in this editorial aside from Whirlwind: “Jas flipped the page in her novel. It was about a girl’s infatuation with a vampire, only the girl acted so stupid and in luv, Jas couldn’t concentrate on the story.” Hmmm, I wonder what book Jas was reading.

A more subtle difference between the books is in the type and severity of danger the two protagonists get in while on a mission to save their horses. Emma is chased around by deck hands and rude adults who do not understand how important her horse is. Cruel adults threaten to murder Jas’s horse. Emma has to contend with a steam boat disaster and is nearly run through by a railroad spike. Jas is stalked and threatened by an adult male who might just murder her. Middle Grade readers would not tolerate this beast terrorizing a ten year old. They would turn on the writer. However, make that girl thirteen or older, and it’s perhaps a fairer fight that will excite readers and keep them turning pages.

There are other differences, but I don’t want to finish this review without saying that Whirlwind is a great book and worth your $7.99. Alison Hart wrote a few Nancy Drew novels and it shows. The mystery at the center of Whirlwind is a corker and it will keep you guessing until the very end. More, you’ll care about Jas and Whirlwind and before you notice it, you’ll have read the last page. You’ll be sorry it’s over, but relieved that Hart has left things open enough for a third go-round.

The last thing I want to say is to again express my admiration for Hart’s keen ability to weave factual information into her fictional narrative, thereby establishing authorial authority. The worlds Hart creates are authentic and suspension of disbelief is made possible by her complete knowledge of those worlds. Here are two perfectly written details slipped seamlessly in the text to achieve that effect:

“The hay supplier just called. He’s out of Hay. I’ve been calling around, but because of the drought, hay’s in demand. Everyone wants too much money. And folks keep calling about horses they want us to take, because they have no grass and can’t afford to feed them.”


“Scam artists like Hugh Robicheaux are careful and clever. We just recently shut down a scheme where racehorses were being sold for inflated prices. An agent and appraiser would place a high value on a horse, even though the actual money changing hands between the previous owner and the new owner was way lower. Based on the appraiser’s value, the new owner could insure the horse for the inflated price. If the horse injured itself on the track or proved not to be a winner, it was killed.”