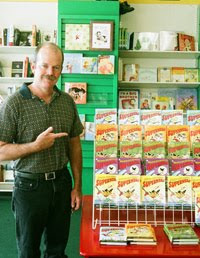 Greg Trine is the author of the Melvin Beederman Superhero series. Click here to read my review of The Brotherhood of the Traveling Underpants. From his website: “Greg Trine lives in his hideout in California, where he has been saving the world since the seventh grade. What was he doing before this time? He doesn’t remember, but he’s pretty sure it wasn’t saving the world. Like his favorite superhero, Greg has trouble stopping trains, though he can stop a truck simply by looking at it.

When he is not ridding the world of devious and sinister bad guys, he is either trying to invent a new flavor of ice cream—his last one was Rainbow Trout Ripple—or writing funny books with his sidekick Rhode Montijo. Sometimes Greg makes Rhode laugh, and somtimes Rhode makes Greg laugh. They’re keeping track of this, and so far it’s a tie.

Greg is pretty sure he received a college degree in something, from a university somewhere. But it’s been so long that he’s probably forgotten everything he was supposed to have learned. He’s just glad to have discovered children’s books, and it is here he wishes to stay for a very long time. Or at least until Thursday.”

And now Greg Trine must face the 7 Questions:

It's pretty hard to narrow it to three but here goes...

The Moves Make the Man by Bruce Brooks

The Whipping Boy by Sid Fleischman

Years ago I set up my life so that I could write more. I don't start my day job until 10 AM. I drop my kids off at school at eight, which gives me two hours to write. Of course, some days I procrastinate like everyone else, but if I'm working with a deadline, I'll write every day. I probably read an hour or less per day.

The short version is this—I began writing in 1992 and sold my first book in 2004. I wrote for magazines in the beginning, then moved on to books. I think hitting 40 was a big motivator for me. It wasn't until then that I took a hard look at my life and realized the only way I'd get published in book form would be if I made writing part of my eight-hour day. I don't work more than a 30-hour week so that I can get some words on the page. Seems to be working.

I believe writers are more born than made. Everyone can improve, certainly, but there has to be a raw ability to begin with. I think most writing teachers would agree. What they hope is that their students become avid readers and if they have talent it will come to the surface by massive amounts of reading and practice.

I love trying to create something out of thin air and especially finding the voice that's begging to reveal itself. My least favorite part is the years of rejection that we all have to go through. Or maybe that's a good thing. I certainly cherish being a part of this, knowing what I had to go through to get here.

If you're just starting out, I'd say begin by taking classes. A good one is the Institute of Children's Literature course...or check out the local university extension classes. I also recommend joining the SCBWI. But mostly it's about reading a lot and writing a lot. There are no easy routes...like the Nike commercial says, Just Do It.

Posted by middle grade ninja at 9:28 AM