Book of the Week: DRIZZLE by Kathleen Van Cleve 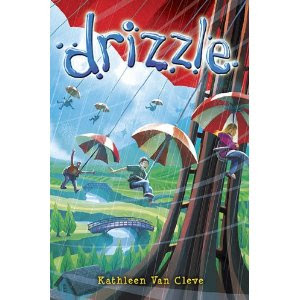 I hope you’re not worn out from all of the celebrating we’ve been doing around here lately, Esteemed Reader. Because this week we’re back at it, celebrating Kathleen Van Cleve and her wonderful middle grade novel, Drizzle. Mrs. Van Cleve will be joining us on Thursday to face the 7 Questions, so come back for that. Next week, it’s to be Bonnie Doer and her book, Island Sting. There’s to be fun times ahead, Esteemed Reader, and I wouldn’t want you to miss them.
Okay. So usually this is the part of the review where I tell you what the book is about, except I’m not sure how to succinctly summarize Drizzle. It is, and I mean this in the best possible way, unlike any other book I’ve ever read. That was what attracted me to it. The truth is, I can’t even really tell you that much about it without spoiling the whole thing, and I don’t want to do that. Mrs. Van Cleve has crafted a work of stunning originality and you owe it to yourself to put Drizzle on your reading list.

Welcome to Rupert’s world famous rhubarb farm. It is a place different from any you’ve ever encountered . Mrs. Van Cleve never specifies that Oompa Loompas don’t work there and I prefer to imagine they do. The rhubarb grown at Rupert’s farm tastes like chocolate, but it’s still a vegetable so your parents can’t get mad. Some of the rhubarb is grown for medicinal purposes and shows tremendous promise as a cure for cancer among other ailments. And there’s giant rhubarb that’s really helping out with the hole in the ozone layer.

But I haven’t even told you the most interesting parts! If Hogwarts were a farm, it would be Rupert’s Rhubarb Farm. It’s a popular tourist destination, and it isn’t hard to see why. There’s a full scale version of the White House on the premises, and if that doesn’t do it for you, check out their castle. There’s also a certain Dark House that may or may not be haunted. And there’s a giant “peace” maze to wonder through and an umbrella ride. It rains every Monday at 1:00pm, except the one Monday it doesn’t. Oh, and get this, there’s a lake in which no one can drown. One boy managed to stay underwater an entire hour and was just fine.

All of these fantastic revelations about the farm take some telling and it is worth noting that the main conflict of the novel isn’t really introduced until page 75, which is practically waiting until the sequel as far as the pacing in middle grade novels goes. And that’s the thing that really got me jazzed about Drizzle. Kathleen Van Cleve brazenly breaks all the rules and displays uncommon courage for a middle grade writer and she pulls off everything. Her book, were it in the hands of a lesser writer, often flirts with disaster, but Van Cleve’s got the chops to make it rain, as it were.

For starters, Drizzle is 358 pages, which puts it in YA range according to many standards, but the main character is eleven and the book is recommended for grades 4-6, clearly upper middle grade or tween range. I won’t pretend to understand how Van Cleve pulled off all of her tricks, but as for how she got away with delaying until page 75 to introduce the main plot when so many of us labor to work it in by page 5, that I get. Now to be fair, she does foreshadow the main plot and she opens the novel with this scene:

But then, on one rainy Monday afternoon, the twentieth of September, I found her, lying faceup, in between the P and E of the PEACE maze. The toes of her silly slippers pointed up to the gray sky as rain washed over her cheeks. I turned to see that all around us the rhubarb plants swished their wide green leaves over their heads, pointing to her body. The lake began to roar as if there were a windstorm, even though there wasn’t. I turned back to Grandmom and begged.
Please wake up, please wake up.

See what I mean? Fearless! And the first line of the novel is “The mist is back.” So there is a hook and the reader is carefully drawn into world of the story. But otherwise, Van Cleve spends 75 pages introducing us to Rupert’s Rhubarb farm and the mysterious nature of the place is so compelling you won’t even notice the main plot, though hinted at, hasn’t started. She uses the time to introduce characters, all of them memorable, and themes she’ll spend the novel discussing, one of the central ones being science versus mysticism—fascinating stuff for a middle grade novel or any novel.

Our heroine is plucky contrarian Polly Peabody, an eleven-year-old after my own heart; after everyone’s heart. You’re going to love her. She’s shy sometimes, arrogant at others, a genuine hero, and readers will definitely identify with her. I want to talk about her most controversial action in a moment, but that means I’m going to enter spoiler territory, so I’ll go ahead and finish the review first. Drizzle is a great book and you don’t want to miss it. It’s funny and an all around good time, but there’s plenty of substance as well. Go order your copy, read it, and then come back for the rest of this blog post in which I spoil something major and discuss Van Cleve’s prose style.

Those of you still reading, I warned you. There is an element in Drizzle a little like a standard Disney cartoon. There are dragonflies and rhubarb plants that communicate with Polly through body language and they are her friends the way Ariel has that singing crab, or Belle has that talking candlestick. One rhubarb plant in particular, Harry, is Polly’s best friend. Harry is no throw away character. He is a genuine best friend to Polly. She shares her secrets with him and they have a true relationship. She even introduces him to other characters. He’s a rhubarb plant, but he’s personified and is a character in the story.

I have long been of the opinion that it takes far more courage to be controversial when writing for children than when writing for adults. Kids are much tougher than adults often give them credit for, but don’t tell that to some parents or teachers. For crying out loud, people in this country protested Harry Potter. In the adult fiction world, one has to write American Psycho to generate controversy, but write one gay character into a popular children’s book and national headlines are made.

When at last the main plot is introduced—the farm is up for sale and the plant life is revolting—Polly becomes very upset. She goes to her friend Harry for answers and believes he has betrayed her. So… she shreds him. I’m not talking like hurts him a little. No. She rips him limb to limb until he is murdered and there is no Harry left. She feels very guilty afterwards and her remorse is a major motivation later. And this is a magic farm in which no one ever drowns, so there’s at least a chance Harry the chocolate rhubarb might be brought back to life.

Still, this is an event that will divide readers, I think. Not kids. Kids will be fine with it. But it may upset some parents to read a book in which the eleven-year-old protagonist commits such a violent act. And it is brutal. As I think you can surmise from the “finding Grandmom’s body” scene I reproduced earlier, Van Cleve isn’t handling the reader with kid gloves. She doesn’t condescend, nor does she revel in being intentionally nasty. She simply tells the story in the most effective way possible.

I, for one, loved the scene in which Polly shredded Harry. I laughed and laughed, partly because I was so shocked, and partly because I have always prayed for a children’s story in which one of those annoying cutesie wootsie sidekicks is horribly mangled. More though, I truly admire the courage of Van Cleve’s convictions. She didn’t truckle. She told the story she wanted the way she wanted, something we don’t get to see nearly enough of. And more, the scene works. It flushes out some of the most interesting aspects of Polly and it is integral to the plot. But it will offend the delicate sensibilities of some adults, I’m sure.

Okay. I see that this review is too long, so I’ll stop here. Except I really want to praise Kathleen Van Cleve’s writing style. Her prose is funny and often lyrical, while clear and effective. There are many passages I highlighted and would like to reproduce here, but what struck me most is her use of white space. The book is 358 pages, it’s true, but it doesn’t feel like it. This is because of frequent paragraphing and use of white space. The pages fly by and I bet young readers are thrilled by how quickly they’re able to read a big book. I’m going to leave you with this passage that I think really best illustrates how Van Cleve uses white space to increase suspense and the pace. It, of course, can be found on page 75:

We both turn to the Umbrella at the same time.

I don’t understand at first. But I look closer and see the people on the individual swings spinning around, out of control—I hear the clickclickclick of the rising Umbrella shaft, relentless, unstopping.

I’m close enough that I can see Chico waving his hands like a banshee behind the controls.

I look up to the Umbrella again, just as the platform seems to slip just a little and the screams become even more awful.

Posted by middle grade ninja at 4:46 AM

Email ThisBlogThis!Share to TwitterShare to FacebookShare to Pinterest
Labels: Book of the Week, Cranberry Queen, Drizzle, Kathleen DeMarco Van Cleve, Middle Grade, Review, The Difference Between You and Me