Book of the Week: ISLAND STING by Bonnie Doerr 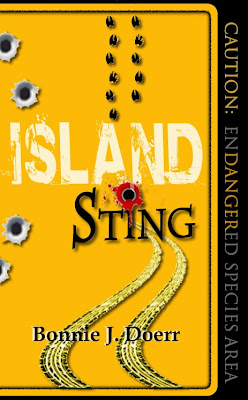 While in college, I picked up a copy of John Grisham’s The Pelican Brief at about 10:00 at night the week of finals. I was worn out from studying and I just needed a little break. Big mistake. I finished the book at about 4am and then spent the next day of finals sub existing on coffee and cursing Grisham’s name. He wrote an un-put-downable book. That’s all well and good for adult novels about lawyers and conspiracies, but can such an experience be recreated in a book for younger readers?

Esteemed Reader, it can. Bonnie Doerr has done it. Island Sting is an un-put-downable book. Don’t believe me? Try reading the first chapter. Heck, the first page! You will flip that page, and then you will read the next, and you will not be able to stop until the book is finished. In fact, my first time through I read it so fast I forgot to make any notes for this review and so I had to go back through it a second time, which was sort of like watching a magic trick in slow motion to see how it was done. Fortunately, studying the way a book was crafted doesn’t ruin the trick, but instead deepens my appreciation for it.

That’s all good and well for me as I already had the experience of enjoying the book when it was fresh and new, but I don’t want to ruin it for you, Esteemed Reader. So here’s the plan: I’m going to do a summary and review and those of you who don’t care for having your magic tricks ruined before you see them should stop there. Those of you who have read the book or don’t mind having it dissected before hand can stick around and we’ll talk craft.

The story of Island Sting is thus: Kenzie Ryan and her mother have moved from New York to the wildlife refuge of Big Pine Key 30, just outside of Key West. In addition to adjusting to her new home among the critters, Kenzie is also dealing with her parent’s recent divorce. After rescuing a deer from drowning, Kenzie is drawn into a rollicking environmental mystery involving a poacher who enjoys torturing and murdering deer, and who might just enjoy torturing and murdering a certain nosey girl. Who is this poacher? Well, that’s the mystery. Along the way, Kenzie hooks up with Angelo, a smoldering hunk of boy who is an area native and well informed about the local wildlife. Will Angelo and Kenzie catch the poacher and stop the slaughter of innocent deer, or will the poacher catch them? Will Angelo and Kenzie share a kiss in the woods? Will Kenzie enjoy the silence of the deer (and dog) ala Clarice Starling style redemption? Will I stop asking these questions and get on with it?

Yes. Yes I will. Island Sting is a fast paced adventure mystery that readers will love whether they’re green teens or older ninjas. It comes highly recommended from me if you’re a lover of books, and extra recommended if you’re a writer looking to hone your craft. You’re going to have a good time and you’re going to learn a lot about the environment in the Keys. But not in a science class sort of way; in a Michael Crichton we’re-learning-about-genetic-engineering-and-palaeontology-to-better-appreciate-it-when-the-Tyrannosaurus-Rex-tries-to-chomp-folk sort of way. In fact, there’s an educational section at the end of the book so that Island Sting easily lends itself to the classroom setting .

My review in three words: read this book. Bonnie Doerr knows her way around the woods, so to speak, and she will show you a heck of a good time. That’s that. Review finished. From here on out, I’m going to talk about how there were actually two people in the box Doerr cut in half, and that’s why the legs kept kicking. If you’re not interested in that, thanks for reading and check back on Friday when we’ll have Ms. Doerr herself here to face the 7 questions. I’ll give you a paragraph break to navigate away now.

For those of you still here, let me ask you: when’s the last time you read a book that was too suspenseful, or too exciting? I’ll wager you’ve never read that book and if I told you I had, you would want to know the title of that book so you could read it. The secret ingredient in Island Sting is conflict, conflict upon conflict upon conflict upon glorious conflict. There is not a chapter in this novel that is not driven by conflict from the first page on. Angelo and Kenzie never just shoot the breeze, they spar back and forth, and beneath their apparent bickering, we sense the tension of romance. Even as they are discussing science, they are at odds and the reader plows through exposition without recognizing it or being slowed by it because there is conflict to be enjoyed.

Splash!
Ripples circled across the dark water farther down the canal. Kenzie scrambled through the mangrove thicket, stumbling over tangled roots toward the disturbance.

Who is Kenzie? What color is her hair, her eyes? What’s her age? What is her background? You don’t know these things and should I reprint the entire first chapter of this novel, which I would like to do but might get in trouble for, you would not know them. And those things do not matter. Doerr doesn’t slow down to tell us. Instead, she focuses on the disturbance in the water, which is a drowning animal, and Kenzie’s will to rescue it. Kenzie puts herself in harm’s way and is nearly killed just after this (is it a spoiler if I tell you she doesn’t die in the first chapter?).

And that is all you need to know about this character to be drawn into the story at once. Eye color, background—these things do not a character make. A willingness to put one’s self at risk for the life of an animal makes a character. At the core, this is who Kenzie is and why we care about her. After this chapter, we know that anytime an animal’s life is at risk, Kenzie will be compelled to act.

Now, of course, Doerr does work in exposition along the way, and that’s how it should be done. If you want to write a book as exciting as Island Sting, start with conflict and fill in only the most necessary exposition only when it is needed. If you start your book with character detail rather than character conflict, you’re less likely to hook the reader, and the longer you delay conflict, the longer you test reader patience. Doer knows this, which is why she starts her conflict with the first word: Splash!

I see we’re nearly out of time. So let me make two more observations and close with some excerpts from the book. When we do learn about Kenzie’s back story, we learn most of it through an argument with her mother. That’s right. The conflict doesn’t stop for a little thing like exposition. We are interested in the fight and just happen to learn the back story along the way, just as we learn science through sparing matches between Kenzie and Angelo. This method works. Pages keep turning and the job of informing the reader gets done.

The exposition that is most essential, Kenzie’s motivation for saving animals, is what Doerr wisely focuses on. It turns out Kenzie feels responsible for the death of her dog and has vowed never to allow another animal to die on her watch. This is Batman vowing never to let what happened to his parents happen to other citizens of Gotham. This is the hero cop whose partner is gunned down in the opening scenes of the movie, and now it’s personal. It’s a tried and true formula. Island Sting is above all things an excellent example of proven methods of creating suspense and it works. If you want to write an exciting story readers will not walk away from, study this book.

Okay. That’s it. I’ll leave you with excerpts and the thing to notice is Doerr’s sparse use of words and great use of white space. In sections, the prose reads like a sort of action poetry. Island Sting is engineered to be read fast:


The ground collapsed.
Splash!
She plunged into the canal.
Splatter. Splat.
A landslide of gravel tumbled after her.


There had to be an opening in the edge of the dense undergrowth. Yes. A trail. Prickly branches grasped her clothes, caught her hair. She ducked and scrunched sideways as she squeezed along the deer trail.
Pop. Pop.
Kenzie jumped. Rustle. Rustle.
She cringed.
A lizard scurried through the underbrush.


She flinched. A giant winged shadow swooped across her path.
Whoosh!
Kenzie hit the dirt.
Whoosh! Whoosh!
Face down. Hands on head.
Air rushed. One huge bird. Wings flapped. Two. Another and another brushed by.
She peeked between her arms.
Swoosh!
Savage hooked beak.
Zoom!
Massive wings.