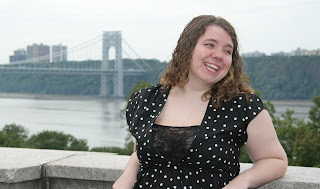 Kody Keplinger was born and raised in rural western Kentucky, where she attended high school and began writing her first long pieces of fiction. She wrote THE DUFF

during her senior year at McLean County High School.

Kody Keplinger is now eighteen and attending Ithaca College in New York where she's majoring in writing and finishing her second novel to be published by Poppy in Fall 2011.

She loves books, Converse tennis shoes, New York City, and popular TV teen dramas. When she isn't writing, she's spending time with her friends and, most likely, doing piles and piles of homework she has neglected.

Kody Keplinger contributes to the popular YA writing and reading blog, YA Highway as well as the vlog group, The YA Rebels.

1. PRIDE AND PREJUDICE by Jane Austen

2. HARRY POTTER AND THE PRISONER OF AZKABAN by J. K. Rowling

3. TO KILL A MOCKINGBIRD by Harper Lee

It really depends on a A LOT of things. I'm a student, too, so I have a lot of work outside of my writing career. It also depends on deadlines. For example, I haven't written a word this week. But 2 weeks ago I was scrambling to meet a deadline and I wrote like 20,000 words in a week - 8,000 of those were in one sitting, actually.

I've been writing since I can remember. Since before it was "writing." I liked to tell stories. I liked to draw pictures and make up stories (which usually meant talking to myself) about the characters I drew. When I got older, I wrote some short stories - I was nine, so most were about talking animals. When I was twelve, I wrote my first "novel" which was really only like sixty-four pages in size sixteen font and it was basically Harry Potter with a girl protagonist.

In middle school, I started writing fanfiction. I wrote about Buffy the Vampire Slayer and Harry Potter mostly. When I was fourteen, I wrote another "novel" and several fragments of novels that never got finished. In high school, I wrote LOTS more fanfiction - mostly in the same fandoms but also throw in a few anime series.

The summer before my senior year, I wrote my first real novel. It was actual novel length and had a real plot that was all mine. I queried it BRIEFLY because it didn't take long for me to realize that it so wasn't ready. I put it aside and started writing other things - all fragments of urban fantasies, weirdly enough.

But in January of my senior year, I started this contemporary romance, inspired by Chuck and Blair's love/hate relationship on Gossip Girl and a conversation I had with a friend of mine about the word "DUFF." I had no idea what the book would be about - just the word "DUFF" and the characters. But a month and a half later, I had a novel. I had some friends beta it, and they encouraged me to query. I never ever thought it had a shot, but I knew I'd regret it if I didn't try.

I started querying THE DUFF shortly after that. Then, in May, I got an offer of representation from the lovely, amazing, superb Joanna Volpe. It was a great day! And then about 2 months later, my book sold to Poppy, an imprint of Little, Brown. It was all such a shock! I never thought I'd get published, but to have it happen like that - I knew I was blessed and lucky, and I'm still in awe. So grateful to everyone who encouraged me.

I don't really think either. I was born a storyteller, not a writer. But I don't necessarily think someone taught me how to write, either. I learned by reading A LOT and by never stopping. I think writers are usually readers. I think you can definitely learn how to hone your craft, but I think the majority of good writing comes from reading good books and seeing how others before you have done it and how a good story is woven.

I think storytellers are born, though. I don't know how to teach someone to make up a story. And I think that those people who WANT to be writers are probably already born storytellers, simply for wanting to tell them. I've never met someone who wanted to be a writer who didn't have that creative instinct in them.

My advice to writers is always read the books you love and the genre you want to write. Read EVERYTHING but especailly that genre. See how others made it work, and then find your own voice.

I love coming up with stories. I love meeting these new characters and learning who they are and what their stories are. That is so fun and exciting to me.

I hate getting stuck. I hate when I can't find to words for a scene I have so vividly in my head. It's maddening!

Again, READ A LOT. Read everything you can get your hands on, and pay attention to the books you love the most. Learn from those authors. It doesn't matter if they are critically aclaimed or best sellers - if YOU love them, then learn from them.

Second, write what you want to read. I wrote THE DUFF because I wanted to read about a teenage love/hate relationship where the girl wasn't necessarily a super model. I also wanted to write an ugly duckling story that didn't have a swan ending a la SHE'S ALL THAT (even though I LOVE that movie). So I wrote it. Everything I write is a book that, had someone else written it, I would read. If you don't love what you write, why should anyone else? Don't worry about what others will think of your writing. Tell the story you want to tell, and then let others weigh in.

Oh, and one last thing. Don't worry about publication when you write. If you're writing just to be famous, it's not worth it. Most writers aren't famous anyway. Instead, write because you LOVE to write. Write because, even if no one else reads your book, you want to tell the story anyway. Even if THE DUFF hadn't gotten picked up, I would still be writing because I enjoy it and it makes me happy. Let the writing make you happy, and if you pursue publication after, then good for you!