Book of the Week: MAMBA POINT by Kurtis Scaletta 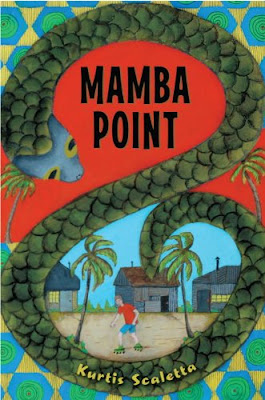 This week is going to be tremendous! We are going to be joined by middle grade author Kurtis Scaletta himself on Thursday and today we are going to discuss his newest book, Mamba Point, which comes out today! That’s right, the ninja got himself an exclusive advanced reader copy and I have been enjoying Mamba Point ahead of everyone else (and what a lot of gloating I’ve done in this post!). So is the book any good?
Good, Esteemed Reader? Good doesn’t quite cover it. How about fantastic? How about wonderful? How about it’s the greatest middle grade book about mambas and American children living in Africa in the 1980s I have ever read! Mamba Point is a new favorite of mine (although I love all of the books on this blog) and I cannot recommend it strongly enough.

In fact, it’s too good! I’m going to have to write a shorter review than usual because I don’t want to ruin the experience of reading it for you. Mamba Point is a tightly wound tale that will make you laugh, hold you in suspense, and have you checking underneath your bed to make sure there aren’t any mambas slithering about. I had not one, but two dreams about mambas while reading it.

So here’s my review: two thumbs way up, five out of four stars, on a scale of 10, it’s an eleven, insert your own hyperbole. The thing to do now is to order Mamba Point and read it without letting me tell you anything further. Have I ever steered you wrong before, Esteemed Reader? Don’t bother reading the rest of this post, just buy your copy: Mamba Point

The thing is, the less you know about Mamba Point going into it, the better. I’m going to try not to spoil the book for you , but inevitably I probably will give some of it away and I’m sure a few of you Esteemed Readers are still reading without having first bought and read it (shame on you). I had the good fortune to read this book without knowing anything going in other than Kurtis Scaletta is a very nice man who gave me a signed copy of his book, and that is the way to experience Mamba Point, because it knocked for a loop (mostly because some jerk blogger didn’t tell me all about it beforehand).

All right, I gave you a whole paragraph to stop reading and now I’m starting the summary. This is the first line of Mamba Point: My brother changed his name on the plane ride to Africa. What a great opening line, yeah? It’s exciting, it’s provocative, and it sets up the story at once. It’s 1982 and Larry, now Law, Tuttle and his brother Linus (there are plenty of blanket and Snoopy jokes) are on a plane to Africa where they will be living near the US embassy in a place called Mamba Point. But not to worry. There aren’t really any mambas there, or so Linus’s parents tell him, and the local inhabitants tell him. But as soon as the boys step off the plane, they are attacked by a mamba, which makes for an exciting opening. Not anymore though. I just ruined it. Told you not to read.

Linus is hoping to make a new start for himself in Africa. He doesn’t want to be the same Linus he was back home in Dayton, Ohio. He tells us constantly (the book is written in the first person) that he is becoming a new Linus. This is a wonderfully universal experience shared by most children who have moved and it resonates. But the problem is everywhere Linus goes, he sees another Mamba. He’s not supposed to be seeing them because there aren't supposed to be any mambas around, but he does. Early in the book, Scaletta drops this information:

"Mom wanted Darryl to shut up because she didn’t want to exacerbate your condition,” he said… When my parents took me to see that shrink after my panic attack at school, he talked to me for a while by myself.

Is interesting, no? Here we have a boy who might just have a mental issue who keeps seeing black mambas everywhere, usually while no one else is around. And the black mambas’ behavior gets stranger and stranger. Linus is able to pet them and they slither around his leg and never hurt them, and he is so not a parselltoungue. A black mamba follows him around, becomes his friend, and even lives in his laundry hamper. At this point, I began to suspect the mamba’s real name was Tyler Durden and Linus and he would start their own Fight Club. How fun is it to suspect something like that in a middle grade novel? It’s a lot of fun and now you won’t have it because I told you about it beforehand.

Is Linus crazy? Maybe. But his new friend Gambeh has a different theory. The rural religions believe some people have a special connection to animals called Kaseng. So those are your options: Linus is crazy and has delusional fantasies, which would make for an awesome story. Or, Linus has a special connection to actual, physically real black mambas and he can hang out with them and convince them to do things without ever being hurt, which would also make for an awesome story. I’m not going to tell you which it is because I’ve already spoiled enough. But either way, what follows is an awesome story and you're going to love it.

I said this was going to be a short review, but I’ve lied about that before (every week). Don’t worry. I’m not going to ruin anything else. But I’ve honestly never read a book quite like Mamba Point and I really, really liked it. It’s a boy book through and through, though girls will like it too, and the thing that makes it really special is the characters. I cared about Linus and Law and even Matt, the nerdy kid who lives across the hall. I knew a couple of Matt’s growing up.

I identified with these characters. Reading the banter of the brothers reminded me of being their age and horsing around with my own brother. And the boys are very funny. Even if a single black mamba had never shown up, I still would have enjoyed reading about them and that’s the hallmark of great characterization. These boys don’t need a strong plot to make them interesting, they make the plot they’re in interesting. And because the boys are so believable in all other situations, from playing video games to meeting girls, we believe them in some of the more fantastic situations.

Mamba Point is a love letter to youth, I think. Today’s kids will love the book, but if you grew up in the last thirty years, this book will be extra special to you. I was a boy in the 1980s and I remember Indiana Jones when he was fresh and new and decades away from the Crystal Skull. I remember how amazing Atari was at the time and how it was to dream of owning Pac-Man or Space Invaders. Back then, I could never have conceived of a Red Dead Redemption and Scaletta’s description of Pac-Man is like poetry. I haven’t played that game in forever, but I broke out my copy of Pac-Man after reading this book. Scaletta also presents us with the age old argument of Marvel vs DC and who has the better superheroes. He picks Marvel, which is just ridiculous and nearly ruined the book:) But later, he makes positive mention of Stephen King, so we'll call it even. Nice save, Scaletta.

Mamba Point is a time machine for adults of a certain age and even though I’ve never been to Africa or seen a black mamba, I felt transported to a time when I had. It was a wonderful experience and worth having. So go buy the book already and don’t forget to come back on Thursday to see Kurtis Scaletta face the 7 Questions or on Saturday to find out the identity of our mystery literary agent.


Posted by middle grade ninja at 6:19 AM