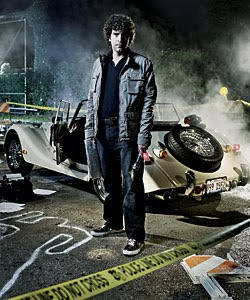 Today, as promised, we have prominent thriller writer Marcus Sakey here to face the 7 Questions. Marcus Sakey is the author of The Blade Itself: A Novel

, At the City's Edge

. Because no one can put it better than him, here is his official bio in his own words:

I was born in Flint, Michigan. Loving parents still together, forty-plus and counting. My brother Matt is a respected video game columnist and owner of the website Tap Repeatedly.

I attended the University of Michigan, two majors, both promptly ignored. Collected single terms at grad schools in several states. Ten years in advertising and marketing gave me the perfect experience to write about thieves and killers.

To research my books, I've shadowed homicide detectives, toured the morgue, gone shooting with Special Forces soldiers, ridden with gang cops, and learned to pick a deadbolt. My first novel, THE BLADE ITSELF, was featured on CBS Sunday Morning and NPR, and chosen both a New York Times Editor's Pick and one of Esquire Magazine's "Top 5 Reads of 2007." Ben Affleck's production company has bought film rights for Miramax. The Chicago Tribune called my second novel, AT THE CITY'S EDGE, "nothing short of brilliant." My third, GOOD PEOPLE, came out to wide critical acclaim, with movie rights selling to Tobey Maguire.

My wife g.g. and I live in Chicago.

I love traveling, especially if there's a chance of hurting myself. I'm a wicked good cook. I never miss the Golden Gloves. I like bourbon neat, food so spicy the guy sitting next to me catches fire, and the occasional cigar. I've watched Firefly more times than I'm comfortable admitting.

It is true, Marcus Sakey is not a middle grade writer. But he's a fantastic novelist for adults and we're lucky to have him with us today. If you'd like to read about my experience meeting Marcus Sakey (why wouldn't you?), click here. Otherwise, it's time for Marcus Sakey to face the 7 Questions:

I write in the afternoon for around four hours, five days a week. The time is divided between staring at the screen, hating myself, and putting words on paper.

I read an hour or two most days, more if I’m between projects or really caught up in something.

I’d always wanted to be a writer. But after college I went on to work in television and advertising for about ten years. Good jobs and I learned a lot, but I was burning out, and one night I told my wife I was thinking of quitting my job to take a stab at writing a novel. We talked about it for hours, and decided that now was the time.

The next morning, before I could get a word out, I got laid off. It was kind of a karmic kick in the behind.

You can teach technique and style. You can build up the muscles of voice. You can collect a tool kit of tips and tricks and methods.

But ultimately, you learn to write by reading, and doing it for decades. You cannot write if you have not been a lifelong reader. It just won’t work.

I get to sit around in my underwear and tell lies for a living. That’s pretty cool.

I also love the research, riding around with cops and touring the morgue and learning to fire automatic weapons.

And there’s no feeling like getting an email from someone who loved your book, who said it kept them up all night. That’s really something.

My least favorite parts are the days and weeks when it’s not working. When you don’t know what you want to say, or how to say it, and worse, when you start to doubt the importance of saying it at all. Those are tough times. But they come with the gig, so you just put your head down and get through, one word at a time.

Butt in chair, fingers on keyboard. That’s how a book gets written. All the classes, all the textbooks, all the planning in the world won’t result in a book.

Kurt Vonnegut. He was a brilliant writer and a unique thinker, and he influenced a generation of Americans. Plus I bet he told good jokes.

www.marcussakey.com
Posted by middle grade ninja at 6:28 AM

Email ThisBlogThis!Share to TwitterShare to FacebookShare to Pinterest
Labels: 7 Questions For Writers, A Blade Itself, At the City's Edge, Interview, Marcus Sakey, The Amateurs, Thriller