Book Review: A CRACK IN THE SKY by Mark Peter Hughes 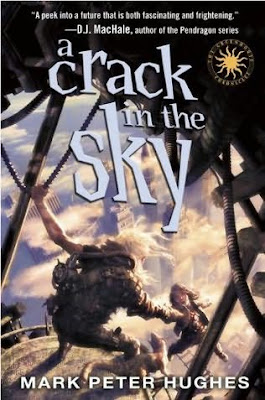 Greetings, Esteemed Reader! Happy Mockingjay day. Rest assured I have my copy and as you're reading this review I am likely enjoying the final Katniss adventure on audiobook. I don’t anticipate reviewing the books here, but I’ve loved The Hunger Games trilogy as much as anyone. I was Team Gale, but I’ve come around on Team Peeta, and so long as the evil government pays for all, I’ll be happy with the ending.

It must be hard to be any other book aimed at younger readers coming out just now, which is why I want to do my part to promote another dystopian Science Fiction novel that also releases today. This week’s book is A Crack in the Sky by Mark Peter Hughes. I’m not sure if it’s upper middle grade, or actually tween, or perhaps even YA. Its protagonist is a thirteen-year-old boy, but its page count is 397 and many of the themes are aimed at older readers who have been reading the increasingly bad news over the last decade. Either way, adult, teen, or younger reader, if you find time to read two books this week, I recommend this one and Mark Peter Hughes will be dropping by to face the 7 Questions on Thursday.

A quick side note, Mrs. Ninja and I saw The Other Guys this weekend. It's a very funny movie in the vein of Anchorman, but the reason I bring it up is because its plot revolves around the rich robbing the poor. Amazingly enough, the end credits of the film consist of statistics about the growing gap between the super rich and everyone else. You know things are far gone when even Will Ferrell movies devote their running time to protesting our current economic model.

A Crack in the Sky is an angry book, so much so that I don’t think Mark Peter Hughes will mind me taking up so much of this review with a discussion of economic injustice. Or perhaps I’ll recieve an angry email from him:)

Either way, I wanted to take a moment to establish what I see as a clear link between populace rage and the rise in popularity of the dystopian novel. A reader who spends their day inundated with news stories of financial scams, corrupt political officials, and oil spills, and who has either lost their job, knows someone who has, or is otherwise feeling the pinch of the recession, a reader who lives in America right now and isn’t part of the top 1% is more likely to relate to a story in which children are forced to murder one another in competition by a government who controls all of their nation’s prosperity and diverts it to the few at the top.

But that's The Hunger Games again. Without further delay, let us discuss the plot of A Crack in the Sky and see if you can’t pick up on our current political and economic model seeping into the tale of a future society that has otherwise never existed:

Thirteen-year-old Eli Papadopoulos lives in a futuristic dome city. I don’t want to give everything away, but in the future the environment is so bad that humans can’t live outside, so we all gather in domes. Citizens of the domes are assured this is not a permanent situation. They are waiting for the Cooldown at which point they can go back outside, though there are those who believe the Cooldown may be a myth.

At the heart of all things is Infinicorp, the major corporation responsible for all aspects of life in the dome cities. Their slogan is “Don’t worry. Infinicorp is taking care of everything,” and as you might expect, the slogan takes on deeper meaning as the story progresses.

Infinicorp manufactures and sells all products and own everything and everyone. At age thirteen, citizens of the dome cities officially become employees of Infinicorp and they work out their lives in service to the corporation. Not our Eli, though. He’s being groomed for upper management. His grandfather founded Infinicorp and his family runs things. It is fascinating to read the parallels Hughes draws between kingdoms of old and the corporate structure.

Anyway, prince Eli, if you will, is sitting pretty. He is in the top 1% and all he has to do is mind his manners and he could one day rise to CEO if he can survive the rivalry of his cousin. Of course, something comes along that changes Eli’s world forever, or there wouldn’t be a book. Hughes takes his time in fully revealing what that something is, so I won’t spill the whole story here. But for those of you fellow writers looking for a way to work in conflict from the first page on, you could do worse than the first line from A Crack in the Sky (not counting the prologue):

While sitting in class being taught by a robot instructor (awesome), Eli witnesses an explosion in the dome sky. There is no need to worry, of course. Infinicorp is taking care of everything. But Eli does worry and he sneaks out of class to investigate, leading to an encounter with an Outsider. Outsiders are people who live outside the dome cities in the harsh desert heat of a destroyed environment. They are not fans of Infinicorp and are dismissed as

"practically animals… Cannibals, cutthroats, and criminals… if starvation doesn’t get them, brain fever rots their minds away. It’s very sad.”

At this time, Eli also finds a copy of Alice in Wonderland, which is appropriate. This encounter leads to further encounters with the Outsiders and Eli chases them down the rabbit hole where he gains a new perspective on Infinicorp and how their actions impact the rest of the world.

Here is what one Outsider has to say, and I’ll let this speech stand for all the rest:

"Consider how Insiders are kept sedated with hollow jobs and empty aspirations. They're distracted with products and meaningless entertainment. Have you ever asked yourself what the purpose is?" Behind the mask the boy narrowed his eyes. "It's a diversion, Eli. A reassuring ruse to maintain a semblance of the old ways. For now it appears safe, but the fantasy comes with a cost. The Great Sickness wasn't the end of the trouble--it was barely the beginning. Harsh reality is still building up out there. It's knocking at the door, rattling the domes' foundations. It won't be ignored much longer--you can be sure of that. But you already sense this. I can see it. It's not Outside that's dead. The wasteland is the only truth we have left, the land of the real survivors. Look around. It's your world that's a living death."

There is more plot than what I have described to you and I haven’t even touched on the revolutionary Tabitha Bloomberg, but you get the idea. The plot of this first book in what promises to be an exciting series is a little like The Matrix. Eli, like Neo, with the help of outside revolutionaries discovers that everything he knows about the world around him is wrong. Perhaps a giant corporation controlling the lives of an entire society isn’t so great after all.

And it’s no coincidence that the novel cleverly opens with a falling bit of “sky.” Eli is a chicken little of sorts and of course his revelations are not really intended for the employees of Infinicorp, but for the readers who live in a corporate controlled environment with disaster impending from all sides. The metaphor holds and provides Hughes with an opportunity to satirize and criticize our own world. Fun stuff.

I don’t want to spoil this book for you, Esteemed Reader, so I’ll stop now. But I will spoil one small thing that is revealed in the first fifty pages anyway. Eli has a pet mongoose. The mongoose had a chip implanted in her head in an illegal operation that enhances her in some way, though no one knows how. Well, it turns out she is telepathic and can have mental conversations with Eli. How awesome is that? In a world of fiction riddled with every type of cliché, Hughes finds all sorts of original twists on conventions. Better yet, he occasionally tells the story from the perspective of the telepathic mongoose. Love it!

I see we are way past our word count. I went over because I felt bad for taking up so much of this review with rantings about how Ayn Rand was wrong (of course she was; virtue of selfishness indeed) and the wealthy don’t always use their cash to provide a greater world for the rest of us, holding industry upon their mighty shoulders like Atlas holds the world. Sometimes they use it to play money grabbing games on the market and bankrupt the country. Sometimes they blow it on every selfish desire they have, including paying Justin Bieber to sing at their daughter’s sweet sixteen party while their fellow Americans lose their health insurance, their jobs, their homes, and slide into oblivion.

But A Crack in the Sky is a great read. You’re going to the bookstore today anyway to get Mockingjay, so why not pick up this book and make it a week of dystopian rage? Come on, everybody! We’re as mad as heck and we’re not going to take it anymore! I, for one, will be demonstrating my populace rage by continuing to review children’s books:)

Let me close with one last observation from a book filled with witty observations because I just really liked this one. Projected on the dome's ceiling is not only the sky, but also various advertisements. At one point, Eli sees something on the ceiling that is projected, but not selling anything, and he is lost as to why anyone would want to project something without a sales pitch. Fascinating stuff. I shall leave you with an early quote from the text regarding the advertisements that I think resonates:

"Nurturing a customer's sense of well-being through positive message repetition," Dr. Toffler was saying, its voice cracking with age, "not only encourages complacency but is also a useful tool that ultimately leads to widespread respect for authority and obedience to rules."

Posted by middle grade ninja at 9:12 AM