Book of the Week: THE NIGHTMARYS by Dan Poblocki 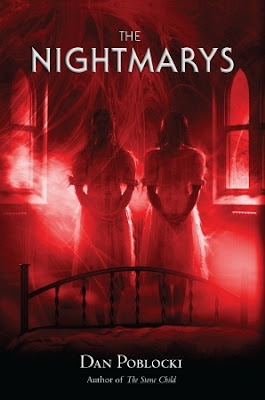 We haven’t had a chance to discuss horror in middle grade fiction. How did that happen? I love horror! Before I decided to devote all of my ninja training to middle grade fiction, I used to read and write adult horror and when I fantasize about having lunch with any writer, living or dead, it’s Stephen King I most often imagine sitting across from me at some place classy like The Olive Garden (and, of course, all of the writers who appear on this blog). I even paid good money to see Piranha 3D last weekend, and though it’s too adult of a film for me to review here, I must say bravo to the makers of that fine cinematic masterpiece. I’ve rarely seen a movie that so thoroughly anticipated what its target audience was hoping for when it paid to see a 3D piranha movie and the flick satisfied on every possible level.
The thing I love about horror as a genre is that like comedy, it either works or it doesn’t. I’m not talking about subgenre pieces like Bunnicula or Ghostbusters, which are really horror comedies. I’m talking about serious horror crafted with the intention of horrifying. A drama can be very good in places, but lacking in others. A crime novel can have a great plot but ho hum characters. But a comedy is either funny or it isn’t. The reader either laughs or he doesn’t. So too, a horror novel is either scary or it isn’t. The reader is either nervous to turn off the light when she finishes or she isn’t. There are varying degrees of horror like the nervous shiver one gets reading The Increadible Shrinking Man as opposed to the up all night too scared to stay awake, too scared to fall asleep sensation one gets from reading Salem's Lot. But my point stands: a horror novel is either A) Scary B) Not Scary. There is no inbetween.

So then, the big question: Is Dan Poblocki’s The Nightmarys scary or not? You tell me:

A little after midnight, she awoke to a soft tapping on glass. Before she even opened her eyes, Abigail feared what she would see at the window--two faces, smiling at her.

Timothy screamed and fell backward, landing halfway down the stairs. He watched, paralyzed, as a thin brown arm reached through the broken window for the lock. Its skeletal fingers turned the knob, and slowly, the front door creaked open.

The corpse stood in the entrance, the dawn lighting the sky in the distance. The creature's white hair lay limp across its skull. The bottom half of its face was missing. Its empty eye sockets were barely visible, but Timothy felt their blackness dig into his chest. The corpse clutched at the wood frame and dragged its feet across the threshold.

Scared, Esteemed Reader? I must admit Mr. Poblocki gave even the piranha-loving ninja a few goosebumps. If you don’t care for horror, you’ve probably stopped reading this review already. But if you like things that go bump in the night, pick up a copy of The Nightmarys or come on back next week and try to win one.

So there you go. I’ve established my criteria for a horror book review: scary, not scary. The Nightmarys is scary, therefore my review is done and in record time. Now I have only to tell you about the book, we’ll talk a little craft, and then we’ll all go get a taco.

The plot is as follows: Timothy July partners up with Abigail Tremens for a school project and while they’re at the museum doing research, Timothy experiences the first of many waking nightmares. He discovers a book there that helps him to unravel a mystery that has something to do with a writer named Nathaniel Olmstead, who astute readers will recognize from Poblocki’s first book, The Stone Child. Shortly thereafter, Timothy’s buddy is attacked by another nightmare image as is his teacher. There’s a supernatural force prowling about and Timothy’s new friend Abigail knows more about it than she’s letting on.

Eventually, after some other events I won’t spoil for you, Abigail spills the details about two girls named Mary she used to know:

Oddly, Mary Brown was white, and Mary White was black; they were both beautiful...

...Together the Marys were an entity, the likes of which Abigail had never seen before. She didn't like it, and she decided she didn't like them. So Abigail gave them a tase of their own medicine. She made up a nasty name for the two girls: the Nightmarys, of course. To Abigail's horror, the girls liked it, and it stuck. They wore it like a badge of honor.

The Nightmarys begin haunting Abigail after she’s moved. Did the girls die, you ask? Ahh, but that would be a spoiler. The important thing is that two supernatural entities are following Abigail around and causing her waking nightmares. And she can’t shake them, no matter what she does:

"I actually thought I could hide from them. I dyed my hair. I was planning on sleeping on the couch in the living room tonight. I thought maybe they wouldn't recognize me..."

Does Abigale overcome the Nightmarys or do they drive her insane? Does Timothy July banish the Nightmarys away forever or at least until the sequel? Naturally, I'm not going to tell you. Instead, I'd like to share with you two passages from one scene and then we'll see about that taco.

The Nightmarys opens with a classic teaser scene. I know different writing guides refer to this opening under different terms, but I've always liked "teaser" scene. Most horror novels open with them. Probably the most famous is the opening of  the film version of Jaws: naked chick swims in the ocean at night, dies a guesome death, establishing the presence of the shark and the need of a hero to rid us of the shark. It also makes a promise to the audience that though we're about to spend some time learning about the characters and establishing the premise, we're going to see more shark at some point and our characters must interact with it, for good or ill. As for examples from books, Pennywise the clown has a chat with Georgie and murders him in the first few chapters of Stephen King's It, a woman is stopped and chased by cannibals in the first chapter of Jack Ketchum's Off Season, and a nearly restored Voldermort kills a man at the beginning of Harry Potter and the Goblet of Fire (by far my favorite of the Potter books).

In the prologue, or "prelude," of The Nightmarys, we meet Abigale's grandmother, though we don't know who she is yet, as she is haunted in a laundry room. It's a very effective scene and the suspense it promises hooks us through the opening chapters of character and premise introduction. It's a shame more novels don't open with a teaser scene like this one. First, notice how effectively Poblocki establishes the setting and mood in a few sentences:

The corridor was longer than she recalled. The light was dim. The pipes hung from the low ceiling, craning at wicked angles every which way. A bitter scent lingered in the air.

Nothing good could possibly happen in such a place. Secondly, I want to draw attention to a rhythm game Poblocki plays with the reader. Notice the way he uses the same sentence pattern three times, lulling the reader a bit, and then suddenly breaks the pattern to great effect:

With a huff, she rolled up her sleeve and reached in, digging through the wet clothes. Finding nothing unusual, she closed the lid. Whirring, the machine started up again.
But before she sat down, the thumping noise returned.

And that's it for this week. Buy yourself a copy of The Nightmarys or come back here next week to win one. Either way, you don't want to miss it. Don't forget to check back on Thursday to see Dan Poblocki face the 7 Questions.

STANDARD DISCLAIMER: Book of the Week is simply the best book I happened to read in a given week. There are likely other books as good or better that I just didn’t happen to read that week. Also, all reviews here will be written to highlight a book’s positive qualities. It is my policy that if I don’t have something nice to say online, I won’t say anything at all (usually). I’ll leave you to discover the negative qualities of each week’s book on your own.
Posted by middle grade ninja at 12:18 PM

Email ThisBlogThis!Share to TwitterShare to FacebookShare to Pinterest
Labels: Book of the Week, Dan Poblocki, Horror, The Nightmarys, The Stone Child, Young Adult