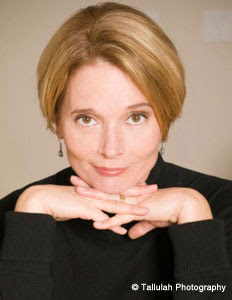 Susin Nielsen is the author of Hank And Fergus

Mormor Moves In, and

. Her newest is Dear George Clooney: Please Marry My Mom.

Susin got her start feeding cast and crew muffins and bologna sandwiches on the award-winning television series, Degrassi Junior High. They hated her food (a fact that's memorialized forever in a poem the cast wrote: "An ode to Susin, the Bran Muffin Queen, we eat them, we die, then we turn green"). Luckily for Susin, however, they saw a spark in a spec script she wrote. Susin went on to pen 16 episodes of Degrassi Junior High and Degrassi High. She also got her first crack at novel writing when she was asked to write Shane, one of the books in the Degrassi series. She went on to write three more: Wheels, Snake and Melanie. She loved writing in book form, and vowed that one day she would write an original young adult novel.

But the TV world beckoned, and over the next number of years Nielsen wrote for and executive story-edited on many well-received TV series, including Ready or Not, Madison, The Adventures of Shirley Holmes, Edgemont, Heartland and the animated series, What About Mimi and Braceface. She also co-created the pre-school series, Franny's Feet. More recently she co-created the critically acclaimed series Robson Arms, acting as head writer and showrunner for three successful seasons. She also adapted Alice, I Think for television, a half-hour comedy series based on the best-selling novels by Susan Juby.

In between the TV work she found time to write three children's books: Hank and Fergus (winner of the Mr. Christie's Silver Medal Award), Mormor Moves In (both published by Orca), and The Magic Beads (published by Simply Read).

Finally, in 2006, she fulfilled her vow from years earlier and wrote her first wholly original young adult novel, Word Nerd. It was published in fall 2008 by Tundra Books.
Susin lives in Vancouver with her husband Goran, son Oskar, and cat Sam.

I'm a voracious reader, so this is hard to answer! But two books that have stuck with me long after I read them, books that I did NOT want to end, are "Bel Canto" by Ann Patchett and "The Adventures of Kavalier and Clay" by Michael Chabon. (I'll get to the third). These books were so powerful, such amazing characters - what I loved about both of them is that the authors weren't afraid of having an amazing plot while at the same time having incredible, well-drawn characters. They were both very literary while still being page-turners. Often I find "literary" books to be a bit, um, boring, and page-turners to be a bit, um, poorly written - these books combo'ed both. My third choice would probably be "Blindness" by Jose Saramago. I'm not the smartest reader in the world, and this one took some getting used to (no paragraphs, run-on sentences), but it was worth the effort and the images have stayed with me for years.

I try to write almost every day, though I've been kind of remiss this summer. I also write for TV, so I'm used to writing to deadline, and often set myself deadlines with my books. Although I'm being more lenient with myself right now, with the book I'm currently working on, and allowing myself to enjoy the summer! I definitely have a need to write, and if a week goes by where my days are consumed with non-writing activities, I start to get antsy and irritable!

I was EXTREMELY LUCKY. I feel almost bad sharing my story because it isn't the norm. However, I had been a professional writer for television for TWENTY YEARS before "Word Nerd" was published in 2008, so that has to count for something!

What happened was: When I was done with the manuscript, I asked Susan Juby - an amazing, celebrated Canadian author - if she would mind having a look. I know Susan because I adapted her hilarious YA trilogy, "Alice, I Think," into a TV series. Susan kindly read it - and liked it enough to introduce me to her agent. Her agent read it, and agreed to take me on. After doing another pass based on her notes, she sent it to a bunch of publishing houses, and, remarkably, three wanted the book.

I think it's a combination, though in my case I'd say it's a 75/25 split. I've recently found all sorts of old papers, report cards, diaries, and from a very early age, teachers spoke about my active imagination, and in my very first diary at age eleven I declared I was going to be a writer. I do think you're born with it, to a large degree. That said, I also took a zillion courses, and wrote and wrote and wrote and wrote, always trying to improve myself. Good courses are invaluable.

My favorite thing ... perhaps the freedom. And the days when you're basically just trying to type fast to keep up with the voices that are spilling everything out in your head. Those are great days! The least favorite thing ... The days when that doesn't happen. When you feel like you haven't found the story at all, that it's all crap.

This will sound obvious, but my advice is, WRITE. I've met a lot of people who say, "I'd like to write a book/screenplay/etc. some day, when I have the time." Like the only reason I write is because "I have the time!" If you're truly meant to be a writer you will have a need to write. And take courses from good people - it's invaluable. Be open to criticism - that's a huge one. There's nothing worse than a defensive writer. I think my work in TV has made me much more open to hearing others' opinions and comments.

I would say Virginia Woolf except I think she would be so intimidating. So instead I'll say Emily Bronte. I don't know why, but I think I wouldn't get as tongue-tied around Emily! Also if I had lunch with Emily I might meet her sisters, too. They were writing at a time where it was frowned upon for women to write, and I love that they first published under men's names. (or, at least, had their manuscripts read under men's names - they may not have been published that way).