Book of the Week: THE SMOKY CORRIDOR by Chris Grabenstein 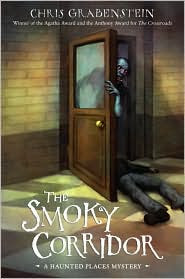 The Smoky Corridor is actually the third book in The Haunted Places Series. Though references are made to events that obviously occurred in previous books, The Smoky Corridor is a standalone tale and I had no problem jumping in without having read the first two books. Nor do I feel that the first two books have been ruined by my reading the third first, so I can go back and read them as well, which I plan to. The upside is that some of the major exposition is streamlined going into this third tale. For example, here is an excerpt from page 3:

Zack knew a thing or two about haunted places, because he had a special gift: He could see all sorts of dearly departed souls (even the ones who popped into paintings) whom other people, especially adults like his dad, could not. He always figured it was the kind of gift that should’ve come with a gift receipt so he could take it back for something better, like athletic ability or super-powers.

The fact that our main character has a sixth sense is sort of a big deal plotwise and if this were the first book in the series I would expect Grabenstein to take some time and really establish Zack Jennings’ ability to chat with the dead. There are certain obligatory scenes that go along with discovering a gift/curse like this one: Zack’s first chat with a dead person, the scene where Zack freaks out and is convinced he’s losing his mind, the scene where Zack accepts his ability and heads out to the graveyard to do some chatting the way Bruce Willis walks around bumping people in the crowded train station at the end of Unbreakable (a Ninja favorite). Having not yet read the first book in the series, I can’t be sure what variation Grabenstein took on these obligatory scenes, but I’m sure some version of them was employed.

That business is all good and well, but it’s a little bit like a superhero origin story, which are my least favorite superhero stories. It’s kind of fun to watch Spider-man learn to wall crawl and websling, but I prefer to watch him when he’s already figured all that out and is headed into a serious battle with Doc Ock. Once the obligatory origin is taken care of, a writer can really open up a story and show us what his protagonist can do with his powers.

Good thing too. The Smoky Corridor goes to some crazy places it probably wouldn’t have time for if Grabenstein had to spend a great deal of time establishing Zack’s ability. Instead, that one little paragraph from page 3 is pretty much all we get and then Zach is off and chatting with dead people he meets. Sweet.

The Smoky Corridor is a wholly original work. I honestly can’t recall reading anything just like it. There are familiar story elements throughout (zombies are more or less zombie regardless of the tale at hand), but I’ve never seen them arranged in quite this way. I know I should provide some sort of plot summary, but I’m afraid I can’t do Grabenstein's far-reaching plot much justice in a few lines. Even so, I'll give it a go: Zack Jennings has just started at a new middle school he believes to be haunted. As Zack’s specialty is ghosts, there wouldn’t be much of a story if it weren’t.

The school’s founder was Horace P. Pettimore, once a Captain in the confederate army—are any former confederate army members ever the good guys? Before he died, Pettimore stole a whole bunch of money from the confederate army and stashed it at the school. He was also a voodoo master with a particular skill in creating zombies (of course he was). Pettimore is still hanging around in ghost form, naturally, and he’s got himself a zombie hidden within the school to protect his treasure (awesome). It turns out Pettimore’s grand scheme is to come back to life so he can finally spend his gold. Thank goodness he kept it hidden at the school rather than investing it in the stock market or he might be stuck waiting for an economic recovery before resurrecting:)

Upon his death, Pettimore donated his estate to the community as a school. Why would such a dastartdly fellow do this? So that every year a crop of fresh children will come near enough that he can inspect them until he finds the one blood relative suitable for him to take over and return from the grave. He’s even set up voodoo charms to attract such a child:

All he needed was one very special child.
The one he had been seeking for more than a century. The one he had used a voodoo charm of magic powder, herbs, dove feathers, and a pint of his own blood to attract to this place.
A blood relative.
Just one!

Could this blood relative Pettimore so desires be our Zack? Maybe yes, maybe no. But wait! There is even more plot I haven’t touched on. And as I see we’re running out of room I suppose I’ll have to leave most of the plot for you to discover on your own. But there are two ghosts, the Donnely boys, who died in a smoky corridor (wink, wink) because they were playing with matches. Even in death they long to burn the school down and I had a good long laugh when plot elements (I won’t spoil them) conspired to give these boys their own zombie to do their bidding.

Okay, I’m signing off. Check out The Smoky Corridor. I guarantee you’ll have a few good laughs and you might just get a little scared. Don’t forget to check back on Thursday when Mr. Grabenstein himself will be here. And it’s good to be back, Esteemed Reader. I’m going to leave you with a passage of dialogue from The Smoky Corridor that made me grin from ear to ear:

"...a voodoo zombie has recently awoken in his nearby hidey-hole. I know this because, well, mine was the first corpse he feasted upon when waking."
Zack Urped. Almost tossed his cookies.
"Sorry," said Mr. Willoughby.
"I'm okay."
"Me too! Fortunately, being dead has one benefit: I didn't feel a thing while the beast ripped me apart
and gobbled down my brain."
This time when he urped, Zack had to put his hand over his mouth.

STANDARD DISCLAIMER: Book of the Week is simply the best book I happened to read in a given week. There are likely other books as good or better that I just didn’t happen to read that week. Also, all reviews here will be written to highlight a book’s positive qualities. It is my policy that if I don’t have something nice to say online, I won’t say anything at all (usually). I’ll leave you to discover the negative qualities of each week’s book on your own.
Posted by middle grade ninja at 9:50 PM