Book of the Week: SCRAWL by Mark Shulman 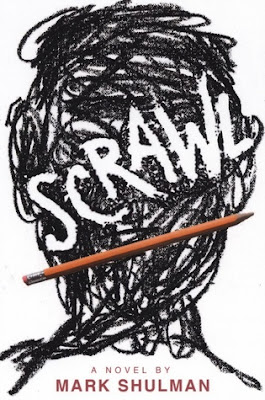 Scrawl by Mark Shulman is a great book and well worth reading and/or purchasing. As you know, I try to get all of my books for free through this blog, but if I were going to pay money for a book, I would pay money for this one. Sometimes you pay $16.99 for a book (Scrawl’s cover price, which I looked up on my free copy) and you feel like you only got $8.99 worth of story. Not so here. I would say I got at least $50.97 worth of story, bare minimum, maybe more. That’s three times the value, at least! So you should buy this book because it just makes economic sense. You can, of course, check with your local library as well. Also, is it just me, or do these reviews get a little sillier every week:)

Silly or not, I do have an obligation to tell you about this book and more, I want to. Meet Tod Munn. He’s an overweight bully who extorts money from the weaker kids. I loved him and you will too. He’s cynical to a degree, but there is a lot of truth to his observations about his school and about the world in general. As with the main character in Amy Reed’s Beautiful, you likely won’t agree with everything he thinks and says and on some things, you will likely vehemently disagree, but I feel that Tod’s viewpoint is challenging and worth considering. Here’s an early example:

I can’t tell you for sure how old Tod is. I’ve searched online and in the text, and I believe it’s left intentionally vague. Nor can I tell you what grade Tod is in. He has to be in middle school or high school, which makes this book upper middle grade to young adult. I’m hoping Tod’s age isn’t specified somewhere as there will be egg on my face, but I’m 95% sure I’m right about this.

And even if I’m wrong, Tod felt like he could have been a few different ages, which is certainly not something that works in every book, but it works very well here. And the best thing is readers from all age groups are likely to see themselves in Tod. There is no content too adult and no swearing, except for the occasional opposite-of-heaven, he—double hockey sticks. There’s nothing so bad younger readers shouldn’t read it, nor will older readers find it condescending. Shulman has found a perfect way to market a book to everyone.

UPDATE: Here's a little clarification on this point from an email I recieved from Mark: You're right -- Tod has no age, no grade. That was the point. Also, as a point of interest, Tod isn't defined by race or color or anything. Already I've been asked if I have any characters of color in the book, and I replied that I have something better: characters of no color. We bring our own crayons.

The reason this intentional vagueness works is Tod himself is telling the story: This is my first book, and I’m writing it for one reason only. Not for history and not for scientific research and definitely not to let out my inner demons. I’m doing it so I don’t have to pick up trash in the school courtyard like certain deviant so-called friends of mine who also got caught.
I am being reformed.

The situation is Tod and his buddies have done something very bad. What did they do? Esteemed Reader, you know I don’t spoil books, but you find out late in the game. The entire story is told in excerpts from Tod written during his detention after this mystery event. There are occasionally comments from Mrs. Woodrow who asks Tod questions about the story to get us information he would otherwise have no reason to give us. It’s a brilliant device and from a craft standpoint, it’s one of the big reasons to read this book.

Writing in the first person is difficult for a number of reasons, most notably a limited perspective. More, it limits the writer somewhat in the language they can use, although most writers cheat their way around this. But If I were writing from the first person perspective of an eleven-year-old girl and I were to point out that a particular situation is a conundrum of paradoxical proportions, it begs some questions about what sort of eleven-year-old-girl I am pretending to be. Is the character a huge nerd who regularly speaks like this? If not, the phrasing is out of character and a misstep. To be fair, writing the phrase “a conundrum of paradoxical proportions” is likely a misstep in third person as well, unless the writer is being intentionally humorous;)

Most writers cheat to some degree, crossing over the line between character voice and prose worth reading regularly despite writing in the first person. The trick is not to get caught and it’s a difficult balancing act, limiting oneself to the character’s fixed perspective while still meeting the needs of the larger narrative. What Shulman has done for himself is to add in an extra layer of complexity by writing the story not only from the perspective of his main character, but also from the writing aptitude of this character. Writers, the book is worth reading just to see Shulman pull this off, and he does pull it off.

Do I really believe that this book was written by Tod Munn, who is under the age of eighteen? No. The spelling and the prose is too perfect for that, and I’m glad of it. Books that are written the way actual teenagers write (most of them) are usually worth quite a bit less than $16.99 and the prose would serve more as a distraction than anything else. Shulman wisely gives Tod an interest in books and a knack for English, particularly spelling, but it wasn’t enough to fool me.

And yet the character of Tod does come through in these pages. I felt like I knew Tod by the end of the book. I felt like if I saw him somewhere I would know him. Because Shulman did pull off the most important trick of all: despite the obviously advanced writing, I did believe I was reading the voice of Tod, that somehow his spirit was intact within these pages.

How did Shulman pull this off? Esteemed Reader, if I knew, I’d tell you. It’s an amazing performance and one I’ll be studying for a time to figure out. If you are a writer as well, and I think most of you are, this is a book to study for character and voice. If you’re a reader, here is a story you’re gonna love and a character worth spending 230 pages with. I’m still thinking about him well after finishing.

Look, I finished the review at a manageable length! This is a good day for me. Don’t forget to check back on Thursday when we’ll have Mr. Shulman here to face the 7 Questions, and on Saturday when Bernadette Baker-Baughman will be here. And now, as is my custom, I will leave you with some of my favorite excerpts from the book:

“The only reason I’m giving you more,” Nardine (lunch lady –MGN) muttered, hurling gobs of saucy meat onto every part of the plate, “is because I know what’s in it. I can only hope it kills you.”


I didn’t have a clue what Rex was up to, but if it meant smacking some missionary in front of an old lady, or swiping that briefcase, their friends would empty the pews to get an eye for an eye.


Being mad at Bernie is like being mad at a dog. Both of them want to make you happy. Either one will make you crazy. Neither of them thinks of the consequences. And they both smell pretty bad in the rain.


They might try to shake some cigarette money out of me, but cigarettes are stupid expensive these days, and they know I don’t have that kind of money.