Book of the Week: WHAT HAPPENED ON FOX STREET by Tricia Springstubb 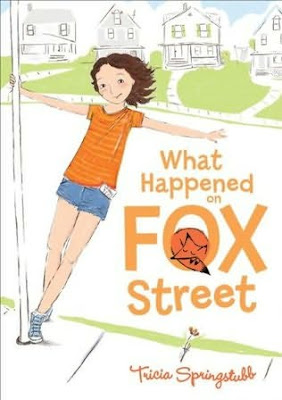 You know how agents and editors and writing guides like to say that the setting should be a character in your story? No? Well, gee, this is awkward:) But if you have heard that, and I’d guess you have and you wondered what it meant, read What Happened on Fox Street. Fox Street is a character in this novel, I would even say a main character. Not the main character, but a main character.
Mo Wren, an eleven-year-old girl, is the protagonist, but only just barely. I think it’s telling that the first line in the novel is about Fox Street and the second is about Mo, and more, it’s about her thoughts on Fox Street: FOX STREET WAS A DEAD END. In Mo Wren’s opinion, this was only one of many wonderful, distinguishing things about it. Oh, and that “dead end” thing totally has metaphoric resonance I won’t spoil for you.

Speaking of metaphor, here’s another great one for you from the opening pages: Paradise Avenue bordered one end, and the ravine the other. Mo Wren’s house was just in the middle, where a heart would be, had Fox Street been a person. The opening pages continue in this fashion.

We meet Mo’s father, her sister, and then we learn: The wooden table was inscribed with dark hieroglyphicish slashes and crescents. Mo’s mother had been an absentminded person, prone to forgetting things like setting a hot pad beneath a skillet or casserole dish. That might just be the loudest had I ever read.

The truth, Esteemed Reader, is that I don’t really want to review this book so much as share with you little bits of the writing I so enjoyed. What Happened on Fox Street is a very sweet book and if you’re the type who cries easy, be warned that this one might just quietly wrap itself around your heart and squeeze the tears from you (isn’t that a lovely image—I wonder why no one’s putting my quotes on their book jackets).

Fox Street is a blue collar street in Cleveland, OH, which is actually really important. I’ll explain more in a moment, but first I suppose I should attempt a summary of the book. Mo Wren has stepped in for her dead mother in the raising of her “wild child” sister Dottie. Her best friend Mercedes is living across the street from her once again after an absence, but she isn’t staying. Maybe no one is.

There are unique characters to get to know living in every house on Fox Street, but we don’t have time for that. As the novel proceeds, we see them as Mo sees them and they add to the character of Fox Street itself. I won’t tell all that happened on Fox Street, but a big part of it is that a big business man is offering Mo’s father cash for the family house. Could be he’s a sneaky shark in a suit trying to bust up the street so it can be turned into something else—an office park, maybe.

Could this be the end of Fox Street? It could be. You’ll have to read the novel to find out for sure, and I hope you will. It’s a great read and worth your time. Mo is easy to identify with and it’s hard not to root for someone fighting to save their childhood neighborhood and way of life. I think people never quite live anywhere as wonderful as where they spent their childhood provided their childhood was not awful.

On its surface, What Happened on Fox Street is a book about nostalgia and the constant changing nature of life, not always for the better. It’s also about how connected each of us are to everyone else—and not just in an Avatar-magic-hippie-tree kind of way, but as a practical matter of course. We see not only two children being raised by a village, but the necessity of that village in the absence of their mother.

For the average reader these two themes are sufficient, they are beautifully carried out, and if the reader looks no closer, he or she still got their money’s worth. But for the reader who digs deeper there is a wealth of philosophical discussion at hand. One of Mo’s big ponderings, and she is often referred to as “the thinker,” is “is there such a thing as necessary evil.” I’ve been puzzling over it since I finished the book, and I must admit I’m lot more wary of that phrase than ever before.

The other story—and I’m sure you think I’m obsessed by now, Esteemed Reader, with my postings of Elizabeth Warren videos and my plugs for Robert Reich novels—is the story of capitalism. But I’m not seeing things, I swear. Capitalism is What Happened On Fox Street, for better or for worse. Wealthier folks desiring greater wealth at the destruction of the poor who acquiesce to it in part and who, when given money, join the party of desiring more wealth.

I won’t list all of the instances in the book in which money is discussed; this review is already too long. But the word capitalism appears multiple times throughout the novel, and there’s no way that’s a coincidence. But I’ll leave you with a telling comment from Mercedes, whose mother has just married a wealthy man and been able to leave Fox Street behind:

“It’s… it’s weird, Mo. But I’m afraid he’s infecting me… With the snob virus. Monette and I, we always lived in such butt-ugly apartments. The last one, if you sat on a toilet you had to put your feet in the tub. After you checked for roaches. But now we live in this stupid mini-mansion, and I… I don’t know.” Mercedes kept her eyes on that spot just beyond Mo. “You get used to nice things. Real fast… But Fox Street is nice.”

And that’s it for this week. You should of course buy a copy of What Happened on Fox Street and don’t forget to check back on Thursday to see Tricia Springstubb face the 7 Questions and then again on Saturday for literary agent John Rudolph. I’ll leave you with some of my other favorite descriptions from the book:

He (Mo’s father—MGN) crooked a finger under her chin. Two lines arched up between his eyes and disappeared into his forehead, forming a tree with no leaves. Mo hated how those lines had dug in deeper every time she looked.


And then he laughed. Not his real laugh, but a laugh like something hard hitting something even harder.


Starchbutt cocked her head, like a robin just before it nails a poor unsuspecting worm.


The air was a sponge begging to be wrung out…


STANDARD DISCLAIMER: Book of the Week is simply the best book I happened to read in a given week. There are likely other books as good or better that I just didn’t happen to read that week. Also, all reviews here will be written to highlight a book’s positive qualities. It is my policy that if I don’t have something nice to say online, I won’t say anything at all (usually). I’ll leave you to discover the negative qualities of each week’s book on your own.
Posted by middle grade ninja at 10:56 PM

Email ThisBlogThis!Share to TwitterShare to FacebookShare to Pinterest
Labels: Book of the Week, Middle Grade, Review, Tricia Springstubb, What Happened on Fox Street