Book of the Week: THE CLOCKWORK DARK: THE NINE POUND HAMMER by John Claude Bemis 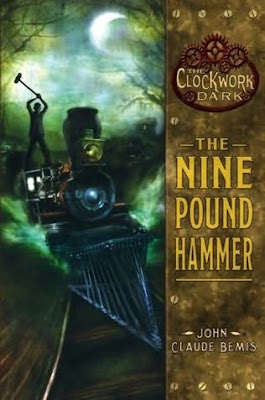 The Nine Pound Hammer is a fun and exciting steampunk adventure that is equal parts funny, scary, and awesome—especially the many action sequences sure to keep readers on the edge of their seat. Full confession: the Ninja is old and out of touch and has never read steampunk before now. Yes, you are right to condemn me, Esteemed Reader. But if the rest of steampunk is anywhere near as good as this book, you can bet I will be reading more.

It’s a little bit difficult for me to review this book as a story because it’s the first in a trilogy and though I’ve started reading the second, the third isn’t out yet and until it is, it’s hard for me to judge the plot as it is incomplete. But The Nine Pound Hammer certainly gets the series started out on the right track.

Meet twelve-year-old Ray. He’s got a little sister, no mom, and a dad whom he hasn’t seen for years, but who left him a magic lodestone Ray is convinced will lead him to something great, possibly an adventure, and possibly back to dad (the lodestone has magical GPS properties, you see). The novel starts with Ray making the decision to leave little sister to a foster family and to jump off a moving train toward adventure. Writers take note, this is a very exciting way to start a novel: a gut-wrenching decision and an exciting action indicating that Ray is either very brave, or not very bright (he's brave).

Ray has some adventures in the woods with poison acorns—it would take too long to explain—some pirates (poison Arghcorns?), a bear, and then, ironically, he boards another train. This time Ray’s riding a traveling medical show train filled with a cast of marvelous characters we just know are going to accompany Ray for the next two books.

There’s something odd and dare I say magical about this train. One of the performers in the medicine show is a blind sharpshooter and just how does that work without magic? From one of the train cars, Ray hears a song that drives him mad with desire old school Odysseus style. Ray investigates and finds something there that changes everything. I’m not going to tell you what, but if you’ve read your Homer, you can probably guess. And if by Homer, you thought I meant Simpson, this will all come as quite a surprise to you.

Speaking of mythology, The Nine Pound Hammer is all about it. The story takes place at a time in America when folks like Paul Bunion and Johnny Appleseed were about. But in Bemis’s when, these folks aren’t just mythological, but real and acting in the world—and yes, I know Johnny Appleseed was always real, but there’s a more fantastic version of him that never existed and that’s the sort you’ll find roaming the pages of The Nine Pound Hammer. The myth you need to know for sure going in is the myth of John Henry, who might have been real.

Who is John Henry? If you know, skip to the next paragraph, but if you’re like me and it’s been a while, you might need a refresher. For the record, Mrs. Ninja was appalled that I didn’t remember John Henry, but I far prefer modern American mythology in which the heroes sling webs and batarangs. Here is a nice John Henry myth summary from John Bemis you’ll want to know going into The Nine Pound Hammer:

The song’s hero, John Henry, is an ex-slave who works on the railroad, a “steel-drivin’ man” who lays tracks and digs tunnels through the mountains. One day, a steam drill is brought in to replace the men digging the tunnels. In an attempt to save the men’s jobs, John Henry challenges the steam drill to see who is faster: man or machine. With Li’l Bill, his shaker (the man who holds the drill bit for the steel driver to hit with his hammer), John Henry carves out more rock than the steam drill. But as everyone cheers, he collapses with his nine-pound hammer still in his hands. The mighty steel driver’s huge heart bursts from exertion. Whether or not John Henry really existed, he is a powerful symbol of our humanity: the self-sacrificing hero who fights the soulless machine until his heart bursts.

I see I am already going to break my resolution of shorter reviews and we can’t have that. So I’ve got two points for writers this week, an angry rant, and some favorite passages to share, and after that, we’ll call it a review. But first, I must say how much I loved the Hoarhounds, which are ferocious beasts, and they alone are worth reading this book even if it weren’t great in so many other respects. Here is a lovely description of the darling Hoarhounds:

Breaking from the forest, the monster was more terrifying than Ray remembered from his dream. Larger than a bull, the Hound bristled with frost-hardened spikes of fur. Long, terrible fangs crowded its mouth, and as it swung its head, the deathly, bitter cold breath whipped out from its snout.

My first point for writers comes not from the text, but from the acknowledgements that follow the book: Enormous thanks go out to my critique group—Jennier Harrod, Stephen Messer, and Jen Wichman—talented writers who helped shape this book in so many ways. You remember our old friend Stephen Messer, don’t you? The PUBLISHED author of Windblowne. That must have been some critique group! This here point makes itself: if you are serious about your writing, get yourself a critique group. If you don’t have time for one, start a blog, reach out to other amazing bloggers and swap critiques with them:) Speaking of which, Michael, if you’re reading this, I’ve started your manuscript and I will totally have notes for you in a week or two.

My second point to writers is that if racism is required in your story, don’t try to clean it up or airbrush over it. Write the racism. Please note, I am not advising the writing of racists things—you’re on your own if you decide to go there—but if you’re writing about a situation in which racism should be present, leave it in. Here is an example from the text:

Having been introduced to the crowd as the pitchman, Nel began. Ray recognized that, although ceremonial, this gesture by Mister Everett was intended to legitimize Nel to an audience that might not otherwise accept the Negro pitchman.

Ninja, you might ask, in a story about magical rocks and pirates that takes place in a fantastical alternate history that never happened, why not leave out the racism? Excellent question, Esteemed Reader! In an alternate history, it might be okay, but if your novel is going to center around the myth of John Henry, it is not okay. I’m not going to tell you how John Henry plays into the book as that would be spoiling, but trust that the title The Nine Pound Hammer signifies his importance.

John Henry is two things: really strong and a slave. To leave out the slavery part is to betray who he is at his core, and you can’t have American slavery without racism (although corporations and credit card companies are fast figuring out a workaround). Similarly, you can’t have American history without racism as it is who we have been. Never mind that we wish we hadn’t been, we were, and to go forgetting it ensures that we shall be again.

You wouldn’t depict a famous battle without American soldiers dying as to deny that reality denies their sacrifice. Well I say to you that denying a history of disgusting, hideous racism denies the sacrifice of those who have worked to bring us where we are: not an un-racist utopia, but in a spot where with our President and that fact that Mrs. Ninja and I can be married without a hanging posse showing up we can maybe start to see the light at the end of the tunnel.

All this brings me to my angry rant: who the heck thinks they have the right to edit Mark Twain? Adventures of Huckleberry Finn, one of my most favorites, is not a racist book, though it contains racist characters from a racist time. Defending this stance is the subject of another post. I know the N-word is nasty and hard to read, but it’s also a word people actually said the way Twain depicts them saying it in that novel. More, Twain knew it was a nasty and hard-to-read word and used it accordingly. Mark Twain is perfectly capable of making his points about the foolishness and horror of racism within the text itself. His book is its own defense. He doesn’t need us cleaning up his language. Adventures of Huckleberry Finn is a literary masterpiece, not a Disney Cartoon, and we writers need to protest this affront. If they start editing Twain, what will they take out of your books long after you’re dead or before? We’ll have none of this Orwellian double-speak, thank you very much.

In conclusion, The Nine Pound Hammer is a marvelous book and you should buy yourself a copy:) Be sure to check back Thursday when John Claude Bemis will be here at this very blog to face the 7 Questions and on Saturday when our mystery literary agent will be revealed. And now, as always, I will leave you with some of my favorite passages from the book:

“You’re nuts, Lenny,” his friends laughed and goaded from the crowd.
“Not as batty as him.” Lenny pointed at Buck and sniggered. “Get it? Batty.”
His friends contorted their faces in confusion.
“Bats is blind,” Lenny explained.
His friends howled.

“Come to me, Hoarhound!” he cried. (I have always wanted to cry this myself—MGN)

Si fell at his side, kissing his brow and cheeks and wiping the sweat from his face.
“Conker!” she cried. “Are you alive? Say something!”
He smiled weakly. “I must be dead if you’re kissing on me.”

The locomotive reversed and began to slink away in the dark like a viper curling back into its den.

STANDARD DISCLAIMER: Book of the Week is simply the best book I happened to read in a given week. There are likely other books as good or better that I just didn’t happen to read that week. Also, all reviews here will be written to highlight a book’s positive qualities. It is my policy that if I don’t have something nice to say online, I won’t say anything at all (usually). I’ll leave you to discover the negative qualities of each week’s book on your own.
Posted by middle grade ninja at 9:26 PM