Book of the Week: THE TIMEKEEPER'S MOON by Joni Sensel 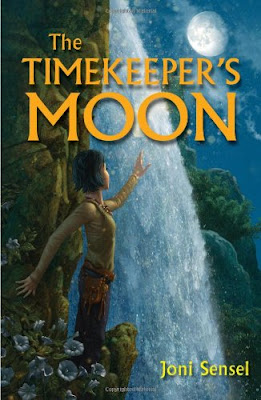 The Timekeeper’s Moon is actually the sequel to The Farwalker’s Quest. You don’t have to read that book first to follow The Timekeeper’s Moon, but it will probably help. What’s that, Esteemed Reader? Do you mind? I’m trying to write a review here. Oh, all right. The winner is… no, for real this time, the winner is Natalie Aguirre. Natalie, shoot me an email and I’ll make sure you get your book. Thanks to everyone who entered and stay with this blog as we’ll have more contests to come.
Anything else, Esteemed Reader? Okay. From time to time, I will read a sequel to a book I haven’t read, which I did this week. I do this because the project I’m working on is a sequel and reading the sequels to books I haven’t read helps me to understand the fine art of exposition. Every sequel has to do a little “Previously on” summary of the first book in some way if the events of the second book are in anyway tied to the events of the first. For some reason, I find studying the techniques writers employ to accomplish this in different scenarios fascinating and it’s a practice I recommend to all writers, even if you never plan to write a sequel yourself.

The first chapter of most of the Harry Potter novels is Harry recalling what happened last book and catching us up with what’s happened since then. Each of Stephen King’s entries in The Dark Tower—highly recommended for adult readers—begins with a section called argument, which is literally a listing of events in the previous books. James Patterson’s Alex Cross novels—yes, I read them, and if you want to write books that sell, you should to—rarely bother with a summary of any kind. Patterson usually introduces the new villain and starts with Alex Cross on the case and we learn what we need to know about him as we go. In Patterson’s case, he doesn’t want us thinking about how very, very dead Alex Cross should be at this point given all his near brushes by lining them up in a summary.

Sensel employs a method that is fairly similar to writing exposition in any novel and it’s worth paying attention to. The trick with summary is to inform the careless reader who doesn’t start at the beginning so he, or I, can understand what’s going on in the story at the point I’m joining, without boring and alienating the return readers who may have just read the first book and know this stuff already. But what about the readers who read the first book, but it was a year ago and they don’t remember it exactly?

In most cases, the thing to do is what Sensel does: she just starts the story. We’re introduced to the characters. Returning readers are happy to see them again and first time readers meet them for the first time. She starts with conflict that is dramatic whether we read the first book or not, but more dramatic if we have. And she spaces out her summary providing what we need to know when we need to know it.

For an easy example we can all relate to, I turn as always to Batman. Most of us know who Batman is, but there may be some who don’t going into a story we’ll call Batman 19. In chapter six of Batman 19, Batman is going to leap off a building and not fall to his death because his cape can turn into a glider. The reader will never get to chapter six if we start chapter one with a long list of all of Batman’s devices, especially his glider, which he has used for Batman 1-18, and an explanation of the times he used them. It would be simpler to wait until chapter six and simply write “Batman jumped, but did not die because his cape turned into a glider” Fans who knew Batman could do this will not be surprised and new comers will be learning of it when it’s important to the story. Still, better storytelling yet would be to find a small instance in chapter five for Batman to check that his cape glider is in order as to reveal it in chapter six without a tiny set up before hand is less satisfying.

In The Timekeeper’s Moon, many of the characters have magical powers that are revealed to us in small instances in the first few chapters so that we’ll be aware of their presence in later chapters. Some of you may be rightly wondering why I used Batman as an example instead of an instance from the book. The reason is because I love Batman, of course, and because The Timekeeper’s Moon is dense. And I mean that in the best possible way.

Sensel’s world is wholly its own creation and it’s easy to lose yourself in it. This is not reading for the casual science fiction fan. This one’s for the hardcore take-me-to-another-reality-and-let-me-live-there crowd. Folks who enjoy Star Trek will probably love this book. Everything has its own name and history and complete explanation. Everything in Sensel’s world has its own place outside the story and you get the feeling that if you asked her about the story of any individual element, she would know it.

The Timekeeper’s Moon is so dense that for me to really provide a summary of the plot, I would have to reproduce whole sections of the book, but here’s the basics: It’s a post-apocalyptic world, always fun, and our heroin, Ariel, is a thirteen-year-old Farwalker. Farwalkers take messages and trade from town to town and walk far. Also, Ariel can talk to the moon and she has a map that is reflective of her life’s journey and… yeah, I’m going to stop there.

The important thing is that Ariel is on a quest and she has friends that go with her and she meets more friends and does some battle and possibly some loving. This story’s got action and romance in equal doses and it will suck you in and you will have a good time. If you like to be fully immersed into another world unlike any reality you’ve ever known, complete with its own seperate language and social customs, this is the book for you.

Sensel’s prose is something to admire. She’s very precise in her descriptions and convey’s volumes with her word choice. She also knows how to turn on the steam in a no-kissing, supposedly unromantic scene:

Nace's touch was intended not to tame her but to keep her in the wild.
Their eyes locked. Neither breathed, but Nace did not lower his fingers. Instead they slid, light as feathers, to trace Ariel's mouth. They stayed to travel the scar on her cheek and follow it back to her lips. He watched his fingertips move as if they belonged to somebody else.
Engulfed in invisible fire, Ariel parted her lips to say something, with no idea what. Accordingly, nothing came out.
Nace caught his own lower lip in his teeth.
That scared her. Fingers on lips were startling enough. Two sets of lips were a kiss. On the brink of a territory she'd never explored, Ariel faltered. She shrank back an inch.

Ooooh, it's like a cold bucket of water to the face in that last paragraph, isn't it Esteemed Reader? Sensel is teasing us, but in the best possible way, and there's no chance teenage girls won't want to read on to find out if this hinted at kiss is ever completed. I, of course, will not tell you one way or the other, but I'll have to ask Mrs. Ninja if one of my touches intended to tame her has ever kept her in the wild (comically raises eyebrows).

Dragged from her bed by that moon, Ariel thought she knew how the tide felt.

The view around her rushed sideways, a blur of shadows on darkness.

"Well, bite off my nose and spit in my brainbox! I believe perhaps I can."
Ariel blinked past his unusual exclamation. "Um... okay. Also, there's a village called..."

"Silly," Sienna declared. "What do they think, everyone is a boy and babies come from the storks?"
"No. From mermaids." Ariel giggled, her embarrassment boiling out. "We're all really fish. You can tell by the way we kiss."

STANDARD DISCLAIMER: Book of the Week is simply the best book I happened to read in a given week. There are likely other books as good or better that I just didn’t happen to read that week. Also, all reviews here will be written to highlight a book’s positive qualities. It is my policy that if I don’t have something nice to say online, I won’t say anything at all (usually). I’ll leave you to discover the negative qualities of each week’s book on your own.
Posted by middle grade ninja at 6:34 AM

Email ThisBlogThis!Share to TwitterShare to FacebookShare to Pinterest
Labels: Book of the Week, Reality Leak, Review, The Farwalker’s Quest, The Humming of Numbers, The Timekeeper’s Moon