Book of the Week: UNDER THE GREEN HILL by Laura L. Sullivan 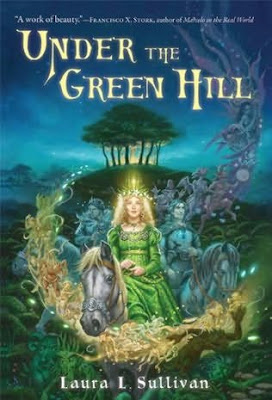 Do you like fairies, Esteemed Reader? No? Is it because of that special documentary on the History Channel that revealed that there have been multiple reports throughout history of folks claiming to have experienced missing time and later recalling that they were abducted by “fairies” with big black eyes and all gray skin that flew around in a UFO? Well, I can’t say as how I blame you. If it’s on the History Channel, it must be true, and you are right to be afraid, Esteemed Reader.

Laura L. Sullivan’s fairies are perhaps not the nasty customers the fairies on the History Channel are, but they may as well be. They are not overtly mean—well, some of them are—they’re just indifferent to human life, which is an interesting take on the fairies. They live in their own separate world with their own separate way of life and humans are not of great concern to them one way or another. To them, humans can be used or not and it’s all the same, rather the way I imagine an alien might feel about an earthling abducted.

So what’s the deal with this Green Hill and what’s under it? Well, the fairies are. And our heroes Rowan, Meg, Pricilla, and James are about to encounter them. The four Morgan children have “hair exactly the color of a Brazil nut,” a “light, rich shade as a hazelnut,” “very pale almond-colored curls,” and in one instance, Rowan’s “burnished hair gleamed chestnut.” All four of them have “skin fair as nutmeats.” Why did I bring this up? No reason. I just thought it was an interesting bit of description.

A terrible killing virus is sweeping North America and so the Morgan children are sent off to live with estranged family in England. As you know, England and Ireland are the land of fairies and not too far from the Morgan children’s new digs is the green hill. Wait, I hear you saying. Everyday children being sent to live with relatives and encountering a magical world of fairies? Haven’t I read this story before? Isn’t this sort of like the Narnia books or, more recently, The Fablehaven books?

The answer is yes, Esteemed Reader. But you know that movie where the guy’s wife/daughter/son is kidnapped and he has to fight and/or kill a whole bunch of people to get her/him back, culminating in massive action sequences? What’s the name of that movie? Taken? Air Force One? Die Hard 1-4? Entire seasons of 24?

My point, Esteemed Reader, is that there are some set ups that just plain work and always will and this is one of them. Sometimes there are four children, sometimes it’s just one, sometimes the parents die, sometimes they’re sick, but children being sent off to live in a strange place where magic happens is a staple of middle grade fiction and one we’ll be seeing hundreds of years from now (in that great library in the sky). I believe the technical term is arc plot, but in any case, it’s got a beat you can dance to and it’s the kind of set up you might just consider repurposing for your own novel. Or do you prefer that your protagonist receive a letter or some other notification that something special about them is the reason they are traveling to the place with the magic (owl delivery optional)?

It’s the details of the set up and what happens once the children reach the magical place that make the story. In Under the Green Hill, Rowan is enlisted in a fairy battle (awesome) and Meg wants desperately to talk him out of it, but you know how boys get when fairy wars are involved. There’s also a little jerk named Finn that the children have to deal with, and it’s a good move on Sullivan’s part. Children rarely have to deal with fairies, but other children, especially nasty ones like Finn are a reality and one day the Finns of the world grow up to be adult jerks and we have to deal with them then too.

Under the Green Hill is fun and exciting and, at times, even a little scary. The writing is unique and worth studying. I actually have several passages to share with you, including this one, which I think is a great description of a writer at work whether it was intended to be or not:

Alone on the Rookery rooftop, Meg chewed thoughtfully on her lip. She had intended to do some real thinking, but if you’ve ever tried to do this you know the closest you ever get is daydreaming. Thinking happens on its own when you least expect it—you get good ideas when you really need them, not when you’re just looking for them.

As for craft, there’s a lot of things in Sullivan’s prose we could talk about and only so much time, so let’s talk about perspective. Most middle grade novels are written in either fixed third person perspective or first person narration. Sullivan has the courage to be an omnipresent narrator. And I’m not talking about changing character viewpoints with each chapter like we saw in The Underneath. I’m talking about changing perspectives from paragraph to paragraph. Example:

“Oh…,” Phyllida began, and stopped as if she was sorting through truth and lies and evasions, deciding on which would serve best just then. She settled on a vague version of the truth. "It's another holiday, like Beltane. The fairies have a... a ritual they do on a Midsummer. Nothing you have to worry about."

A ritual? She must mean the Midsummer War for which the queen recruited Rowan. Meg's mouth gaped and closed as she tried to decide whether to tell Phyllida. I'll tell her, Meg decided.

Now here is something I have not seen much of in modern fiction. Usually, a shift in perspective like this one is evidence of writer error:) But not so in Under the Green Hill, or per my review policy, I wouldn’t point it out. The shifts continue throughout the work and though Meg is our usual perspective, by the novel’s end, the reader has experienced every character’s take on the story. And here it works because this is an epic tale with a lot of unique characters and a lot of action, and it is fun to get a peak inside the head of everyone.

But this shifting does keep us at a slight distance from all of the characters as a result. Therefore, when considering omniscient narration in a story, as with all writing choices, the writer must weigh the pros and cons in deciding what method best serves the work. Sullivan made her choice and I think the novel is richer and more interesting for it.

And that’s gonna do it. Be here Thursday for Laura Sullivan and this Saturday for our surprise literary agent. As always, I’ll leave you with some of my favorite passages from Under the Green Hill:

On one side they glimpsed an enormous room dominated by a wooden dining table, its unlit candelabra like ghastly dead spiders with their legs in the air.


He blew his nose softly, as though to do the job properly with so many people around might be rude.


“Why did you say yes, Rowan?” Meg said, wringing her hands. (Hand wringing is a very awkward thing to do. But perhaps when one is distraught, it feels more natural.)


She twanged the string and leaned close to it, smiling, as the vibrations spoke to her.

Meg Morgan charged through the dairy doors, where she was at once confronted by the solemn face and unyielding bulk of the dun cow. She blocked Meg’s path and refused to budge, looking at her in that particularly cowlike way that says, Sorry, but I really know best.


STANDARD DISCLAIMER: Book of the Week is simply the best book I happened to read in a given week. There are likely other books as good or better that I just didn’t happen to read that week. Also, all reviews here will be written to highlight a book’s positive qualities. It is my policy that if I don’t have something nice to say online, I won’t say anything at all (usually). I’ll leave you to discover the negative qualities of each week’s book on your own.
Posted by middle grade ninja at 10:46 PM