Book of the Week: TRAUMA QUEEN by Barbara Dee 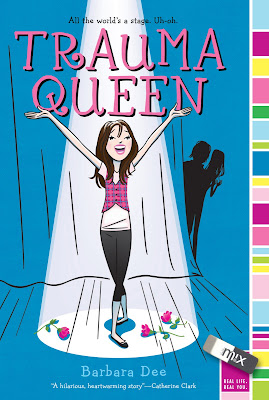 Today we are discussing Trauma Queen and on Thursday we’ll have author Barbara Dee here to face the 7 Questions! But wait! There’s more! On Saturday after months of me asking and begging, literary agent Holly Root will be here and you can’t ask for much more than that! What a wonderful week to be a Ninja!

Trauma Queen is a great read and everything a reader wants a book to be. It’s fun, it’s funny, it’s got great characters who feel real, and a catchy little plot that pulls the reader right along to the end. It’s not perhaps as weighty as War and Peace, but who the heck wants to unwind at the end of a long day with War and Peace? Please don’t misunderstand me. I do not mean to imply that Trauma Queen is shallow. Only that it’s not self-important like too many other books whose titles I won’t mention. Barbara Dee is primarily interested in showing the reader a good time first, and working in a theme and sneaking in a message or two only once the reader’s basic needs have been met.

You regular Esteemed Readers know how much I love a great opening and the opening of Trauma Queen is nothing short of genuis:

I am standing outside homeroom in yellow flannel monkey pajamas.
Everyone else is dressed normally: jeans, track pants, sweaters, whatever.
Apparently because today, Monday, February 23, is not Pajama Day at Crampton Middle School. Also apparently I am the only one who is celebrating Pajama Day, because I am the only one whose mother told her it was Pajama Day. After using the New Student Information Packet to line a dog crate for this one-eared beagle she’s babysitting.

I’ve gone on at length about great openings in the past, so I’ll try to avoid that here. Still, note how Dee introduces conflict and character right off the bat, grabbing the reader at once. It’s true, no one’s been poisoned and must find the anecdote before the end of the story and it’s an opening that won’t hook everyone. Show this opening to an average twelve-year-old boy and there’s a good chance he’s going to set the book down and play L.A. Noire (I’m so excited), but a book called Trauma Queen is probably not going to be picked up by too many average twelve-year-old boys in the first place.

Barbara Dee knows her reader and from the start she grabs that reader and yanks her in. ‘I’ is seventh grader Marigold, whose name we learn in the next sentence. But her name is not important in the first few lines. What’s important is that she is an awkward adolescent in a social situation going poorly that we can all relate to. As much of the conflict in Trauma Queen derives from being an awkward adolescent, this is as good a place to start as any.

But the master stroke comes when Marigold reveals, most humorously, that it is her mother’s fault she is dressed in pajamas on a non-pajama day. Bam! Check and mate. By the fourth sentence Dee has introduced us to the main conflict of the novel, to the battle between embarrassing, thoughtless mother and know-it-all seventh grader that is to be the meat of our feast. Right away, the reader can decide whether stories about teenage daughters and their mothers is of interest or not and we know, not the whole story (the book is more than four sentences for a reason), but what we can expect from the book that follows. I’d be hard pressed to find another opening as good as this one.

It’s true that the conflict started here is very general and very broad, which is what makes it so universal, but the story is in the specific details that set this mother/daughter conflict novel apart from others. Otherwise, we could just pop in Freaky Friday and there would be no need to further explore this particular story territory. Here is the way in which Marigold’s mother is introduced:

When I get home that afternoon, Mom is in the living room. She’s in her yoga pants, upside down, surrounded by marbles.
For her this is normal.

Mom is an odd bird indeed. She’s a performance artist and if ever there is an occupation a teenager, boy or girl, would not want their mother to have its performance artist. Having a parent who is an artist, with all the flakey sensibilities that seem to go along with it (I look forward to one day humiliating my own children), is bad enough, but having a performance artist for a parent takes the cake. If Mom is a writer, she’s bound to be odd, but at least she does most of it in private. If Mom is an actress, at least there’s a script and a director behind her.

But if Mom is a performance artist, it’s just her. One of Mom’s acts consist of wearing a wet suit and pouring cooking oil all over herself, even drinking some of it. This is her impression of the United States guzzling oil and fair enough. It’s a clever gag and even thought provoking; if you’re simply a member of the audience. It’s quite a different matter if it’s your mother on stage doing this and all of your classmates are watching. Teenagers find their parents embarrassing enough without them covering themselves in oil in public.

And so it goes. Trauma Queen opens on pajama day in the present, but then flashes back to when Mom made an enemy of Marigold’s best friend’s mother by doing an “interpretation” of her on stage. Best friend Emma’s mother does not take it well and forbids Emma from associating with Marigold. Marigold’s mother is ruining her life! From here the conflict only escalates and you can practically hear an editor whispering “raise the stakes” when Mom becomes the new theater instructor at Marigold’s brand new school. Marigold’s life is over!

I see we are nearly out of review and I have more passages I want to share! How does this keep happening every week? The main craft point I want to make this week is in regard to Dee’s masterful characterization. There is not a flat or uninteresting character in Trauma Queen. Mom is every bit as interesting and compelling as Marigold. Dee shows us Marigold’s perspective, of course, and we will feel that Mom maybe needs to take it down a notch. But Dee also manages to show us Mom’s perspective. We respect her right as an artist and we understand her motivations for the wacky havoc she wreaks. Both Marigold and her mother are flawed and unique and worth reading about.

Further, Dee contrasts their family dynamic with some of the other mothers, most notably Emma’s mother. Emma’s mother is everything Marigold’s is not. She’s a responsible over achiever and pillar of the community and yet, she’s as tightly wound as an insane murderer in a Stephen King story. Here is my favorite description from the book that for me says it all about Emma’s mother:

At first Emma’s mom stood there in the kitchenette looking stunned. Everything about her was so straight and perfect—her shoulder-length blond hair, her white teeth, the tiny cables on her turquoise sweater—but she had this twitchy look on her face like, Okay, Trisha, don’t panic, you can handle this.

In her own neurotic way, Emma’s Mom is ruining Emma's life just as much as Marigold’s mother is ruining Marigold's, and more amusingly, Marigold’s grandmother is still attempting to ruin her mother’s life. The result is a tale that reminds us that human relationships are imperfect, but essential. Trauma Queen is a very funny, very well written tale that will provoke thought after delivering a enjoyable story. Two thumbs way up!

Don’t forget to come back on Thursday when Barbara Dee will be here and again on Saturday when Holly Root will be dropping by to see us. I will miss you during my time away, Esteemed Reader, but be assured it’s so that one day, just maybe, I can name my own book as the Book of the Week (and yes, I am that smug). Now I leave you with some more of my favorite passages from Trauma Queen:

Her olive-colored skin—the skin we all three have, Mom, Kennedy, and me—looked weirdly pale, as if I were looking at her through tracing paper.


I could feel my eyebrows getting sweaty. “It wasn’t a public meltdown, you guys. It’s just what my mom does.”
I suddenly realized how wrong that sounded. Like: My mom wasn’t just crazy on that one special occasion. She’s ALWAYS crazy. “She’s a performance artist,” I added quickly. “She was just doing one of her characters.”


“…Because you know, precious daughters, when it all comes down to it, life is really just one big improve act.”
That sounds like a line she’s practiced. Which is kind of ironic, actually.

STANDARD DISCLAIMER: Book of the Week is simply the best book I happened to read in a given week. There are likely other books as good or better that I just didn’t happen to read that week. Also, all reviews here will be written to highlight a book’s positive qualities. It is my policy that if I don’t have something nice to say online, I won’t say anything at all (usually). I’ll leave you to discover the negative qualities of each week’s book on your own.
Posted by middle grade ninja at 11:33 AM

Email ThisBlogThis!Share to TwitterShare to FacebookShare to Pinterest
Labels: Barbara Dee, Book of the Week, Just Another Day in my Insanely Real Life, Middle Grade, Review, Solving Zoe, This is Me From Now On, Trauma Queen