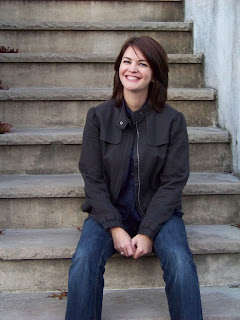 Taylor Morris is the author of the Hello, Gorgeous!

series as well as BFF Breakup

, Total Knockout: Tale of an Ex-Class President, and Class Favorite.

Click here to read my review of BFF Breakup.

She lives in New York City with her orchestra conductor husband and their two cats, who have hyphenated last names.

Not a fair question! It changes based on recent reads, not to mention my mood, but I’ll give it a shot. Gone With the Wind is one. Can I count the Harry Potter series as another? Third, I’ll pick a favorite from what I’ve read this year—Lauren Oliver’s Delirium. The idea of the book could have gone so wrong and a bit cheesy, but she handled it perfectly and I was enthralled from cover to cover.

Another reason why it’s great to live in New York City is that I commute by subway everywhere, and that’s invaluable time I have reading. I’d say that each week I spend about ten hours or more reading, including on the subway, waiting for the subway, and at night before I go to bed.

As for writing, I write just about every day, including weekends and some holidays but how many hours I spend depends on if I’m on deadline. Since I’m in the midst of writing a series right now, that means I’m always on a deadline! I would say I spend a solid 25 hours each week doing actual writing. The rest of my time I’m thinking about what I’m writing and how to write an upcoming scene.

College was definitely a part of my path to publication. Emerson College is where I fully realized I wanted to write fiction and had the first thoughts that maybe I could one day get something published. New York is the second thing that led to my being published because it’s where the third thing that led to my being published happened—I attended a novel writing workshop with Media Bistro. I wrote a first draft of a novel in that class, and someone in class recommended an agent to me, who I later signed with and who later sold that first book (Class Favorite). College + New York City + Media Bistro = Taylor Morris published

Definitely a bit of both. I think we all have hidden talents that may never be released if we’re not taught to nurture them. But if you’re not a writer deep down inside your soul, no amount of teaching can make you a good writer. I tried writing stories as a very young child but for me, having constructive criticism helped make me so much better—both in college and in courses like Media Bistro.

Develop a thick skin. Writing is a personal thing and when people don’t like something we’ve written—published or unpublished—it can sting. But every writer gets criticized, even the best authors. It’s better to be critiqued and criticized before you have something published than after—so make sure you give your writing to people you trust to get a different perspective. Feedback only makes us better. It may hurt to hear that a beloved character comes off as whiny or annoying, but learning how to fix such things will only make for a better story.

Whoever it was I’m sure I’d become a bumbling fangirl and be utterly mute! But if I could choose anyone I’d like it to be J.K. Rowling. I think she’s brilliant. When Oprah interviewed her in the final season I hung on her every word—her ideas and writing process, what she thinks of wealth, religion, herself…she’s endlessly fascinating and an incredible writer and storyteller.


www.taylormorris.com
Posted by middle grade ninja at 9:44 AM