Book of the Week: JUNIPER BERRY: A TALE OF TERROR AND TEMPTATION by M.P. Kozlowsky 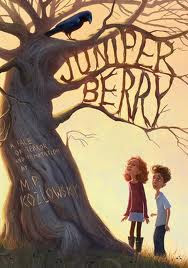 Can I confess something? I read books upon books and articles about how to write a great opening for a book, and every last one of them claims you need a hook. I accept this and it’s the reason why of all the things I notice in each week’s book, I’m so often reporting here whether or not it has a great opening and a great hook to make sure the reader leaves the library with the book under their arm. To be fair, I try not to repeat myself too often, so a book may have a great opening and I may not mention it if I spent the whole of the previous week’s review discussing openings.

These writing books claim a reader can be hooked immediately by a situation or a question or an author’s writing style. Well, confession time, I have my doubts. It’s easy for me to see a reader being hooked when the story opens with a character discovering his mother is really a man or the character has just swallowed poison and has the length of the story to find the antidote. It’s harder for me to believe in a reader being hooked by an author’s style. Probably it stems from my own insecurities about my writing style that I don’t imagine anyone can be hooked unless I tell the reader today is the day the protagonist's life will be forever changed.

But M.P. Kozlowsky has given me pause. Here is the opening of Juniper Berry:

THE HOUSE WAS A MANSION, the lake was a pool, Kitty was a dog, and Juniper Berry was an eleven-year-old girl.

This first sentence is punchy, it’s fun, and it genuinely makes me want to read the book that follows. Kozlowsky’s style is perfect for a book like this and as I read the first chapter I was put at ease knowing the entire story would be told in his sardonic voice that plays with the reader.

His hair felt like thick strands of yarn or, Juniper preferred, waterlogged caterpillars. She squeezed one tangle and it leaked water into her hand.

By the way, as we’ll learn on Thursday, M.P. Kozlowsky was an English teacher before he became a writer. But I knew this had to be true just from reading the book before I read his bio. There are all sorts of fun references to literature and mythology throughout Juniper Hill, but you know what the real test is? If a character offers to show another character anything in a handful of dust, the writer is an English teacher.

Where are my car keys? Oh, let me show them to you… in a handful of dust = English Teacher:) I should have been a pair of ragged claws…

I know there are some of you Esteemed Readers who won’t follow the previous paragraph, but hopefully not many of you. If “I will show you fear in a handful of dust” doesn’t mean anything to you (Google it), it won’t interrupt your reading this review or Juniper Hill.

But if you yourself are an English teacher or at least a well-read person, Kozlowsky has hidden little treats for you like Easter eggs. Literary allusions are simply a way of telling an inside joke appreciated by other book nerds who grock its fullness (the Ninja’s own favorite allusion).

Juniper Berry’s parents are famous movie stars, which sounds like a lot of fun. Her dad has won two Oscars, after all, and who hasn’t imagined what it would be like to give an Oscar speech or at least associate with people who’ve done it? But there’s something wrong with Mr. and Mrs. Berry. There’s also something wrong with the famous parents of Giles, Juniper’s neighbor and new friend. Here is one of my favorite descriptions from the book that pretty well sums up all the reasons I’ve decided to avoid becoming famous (yeah, these are the reasons):

Suddenly security was at the gates, pushing the crowd back. But it wasn’t for Juniper’s sake. Mr. and Mrs. Berry’s car was coming though.
As the black Bentley wheeled past the gates, the roar of the crowd grew. Their hands slapped at the tinted windows. “Who’s in there?” the shouted. “Which one is it?” Then, as if in response, Mrs. Berry’s hand emerged from a crack in the rear window and waved. “I love you! I love you!” the crowd shrieked, loud enough for Juniper to hear all the way on the roof. One fan jumped on the hood of the car and had to be forcefully removed. Some were actually crying. “You’re the best!” “Stop, please!” More pounding of palms against the windows and doors. Hands extended markers to sign their pictures and T-shirts, cameras clicked away madly.

We’re suspicious of famous people, I think, or at least I am. Once someone has become so unimaginably famous as to be separated from the rest of us, we suspect there must be something that’s intervened and made them better than us. Brad Pitt must've been the secret son of a god, JK Rowling must've made a deal with the Devil to teach kids about witchcraft in exchange for her success (sorry, she’s really just a better writer), etc. By the way, do you want to know the real reason Jim Morrison, Kurt Cobain, Janis Joplin and so on all died at age 27?

Actually, I met Amy Whinehouse (bought her a drink even, which I now regret) and I'm a little amazed she made it past 25.

If you’ve ever suspected some sort of conspiracy amongst the rich and famous, then Juniper Berry is the book for you.  I really shouldn’t tell you anymore about the plot and I may have already told you too much. Juniper Berry is a ripping read and the less you know about it going in, the better. But I will tell you this: the subtitle “a tale of terror and temptation” is there for a reason—emphasis on the terror, though there's plenty of temptation. Don’t believe me? Check this lovely passage out:

Without thinking, Juniper ran into the room. “What are you doing?!”

And that was the moment she knew real fear.
Her mother turned to her, her face nearly melting, the skin bubbling from beneath, and screamed at her in a voice of utmost horror. “Get ooouuuutttt!” The words sounded strangled, deep, like a straining and damaged foghorn. Her mother’s eyes were no longer her own; they bulged grotesquely, yet the irises shrank away. Her mouth drooped and sagged as the air of the balloon found its home inside her body, her skin turbulent like boiling water. Bestial moans crept from across the table. There, her father’s head was leaning back, eyes to the ceiling as if satisfied, yet his legs shook violently and his body twitched. Not once did he turn to his daughter.
The veins in her neck pulsating viciously, Mrs. Berry screamed again, “Get ooouuuutttt!” And Juniper fled the room.

Juniper Berry is not for the faint of heart. There are scenes to disturb and to terrify, which I loved, but they may wig really young readers out. M.P. Kozlowsky will show them fear in a handful of book:) So what are you waiting for? Why are you reading this review (not that I don’t appreciate it) when you could be reading the book itself. Juniper Berry is a fun read filled with wild visuals that gets crazier with every chapter that passes.

Review done. That’ll do, Ninja, that’ll do. I’m going to close with some more of my favorite passages from Juniper Berry:

…filling the room with thick voices, as if they breathed a fog of sound.


Mrs. Berry stormed through the house, a newspaper crumpled in one fist, a red touch phone in the other, which she was constantly dialing. She had long, thin legs with striking muscle tone. Her torso was also long and seemed to bend like warm rubber, and her fiery mane enveloped her stunning face. She had so much hair, one might not even notice how empty her eyes were.

Juniper crouched all the way down and extended her neck much like a turtle to peer into the room.

Mrs. Maybelline found this hysterical. She guffawed with every ounce of her rather large being, her cheeks reddening, her veins pulsing. “Kids”—she laughed—“you have to love them.” She continued laughing, her bulbous body bouncing jollily. Juniper couldn’t look away. It was quite a sight.