Book of the Week: MY BROTHER'S SHADOW by Monika Schröder 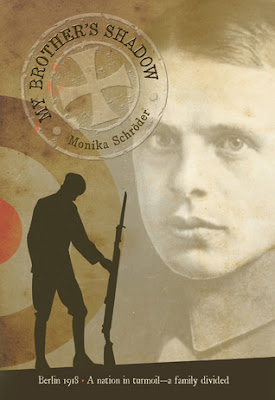 Monika Schröder knows who she is and what kind of story she’s telling in My Brother’s Shadow. The book won’t be for everyone, and that’s not a put down by any means. I absolutely loved this book and I have no doubt most readers will love it as well. More, I loved Saraswatti’s Way and was looking forward to see if this book would live up to Schröder's last. It absolutely does and Schröder can be proud that not only has she written one amazing book that everyone should read, now she’s written two.

All this reminds me, there won’t be a writer interview this week. Monika Schröder has already been kind enough to face the 7 Questions and you can read her interview anytime you like. There will, of course, be a literary agent interview on Saturday.

My Brother’s Shadow is historical fiction set in Germany in 1918 during the First World War. First World War, I hear you asking. Does that mean there won’t be any Nazis? Of course, there’s a great deal more to the history of Germany than the Nazi party, but you can’t convince Hollywood of that. And it is my sad duty to inform you that in My Brother’s Shadow, although the groundwork is being laid for Nazis, there are no actual Nazis.

There are some spoiled American children who are never going to read a story about people in another country that happened before they were born (why this should matter to American children, I have no idea, but it does seem to). My Brother’s Shadow is a YA book rather than a middle grade, but I have no doubt some children under 12 would enjoy this story and there’s nothing so very adult to prevent them from reading it. But I’m talking about the children willing to read any historical fiction in the first place, let alone a book about German Nazi-less history set during the First World War.

By its very nature, My Brother’s Shadow has ruled out readers. Almost every book does this to some degree. The Left Behind books were probably never going to be read by Christopher Hitchens and so on. Monika Schröder doesn’t care. She has a story to tell and she’s telling it. If you’re smart, you’ll pick up a copy and enjoy it. I certainly did.

Moritz Schmidt is our sixteen-year-old hero caught between two worlds: the repressive regime's traditional order and the coming democratic revolution. His brother Hans is a soldier and he’s hardcore:

It reminds me of Papa, who died at Verdun two years ago. At first his letters are proudly described the devastating impact of the German flamethrowers on the enemy’s morale, but as the battle dragged on he openly expressed his despair. When my mother read one of those sad letters to us my older brother, Hans, turned red in the face and yelled, “Maybe we should send him a nerve tonic to build up his strength if he is such a weakling.” Hans can get angry like that.

Moritz’s mother and sister and new Jewish girlfriend are revolutionaries. Poor Moritz is torn between them and comes to symbolize Germany as a whole—clinging to a revered past for which so much has been sacrificed and yearning for a new future in which democratic prosperity and Jewish girlfriends will be cool with everyone (I don’t have the heart to tell him he might be in for a bit of a wait).

And then there’s Hans, who loses an eye and half an arm in a gas explosion and is badly disfigured. With his rhetoric and his appearance, Hans reminded me a bit of Anakin Skywalker toward the end of Revenge of the Sith. And why not? In both cases, a dark empire is coming and we can see it forming in the horizon.

But for all that, My Brother’s Shadow is not about Hans or the likeminded that are going to bring about nasty business for a time. This is a book about Moritz and the German spirit and how it will triumph, even in the face of dark times. After all, American people as a whole are basically good, even as we move from one dark part of our history to the next. Does it not follow that this is also true in other countries?

Through different plot contraptions, Moritz is brought into contact with different characters in multiple locations representing multiple viewpoints, all of which contribute to Moritz’s new view of himself and the reader’s understanding of Germany’s coming revolution.

I found each encounter fascinating and Schröder has a gift for making me feel as though I’m there, witnessing each event first-hand. And every adventure Moritz has broadens our knowledge of the time and place and society by delivering important exposition as well as revealing national motivations, as during this robbery scene:

“Look at this. The order of the Crown Cross, Third Class with Swords.” I hold up the metal cross on a blue riboon. “And here is a medal commemorating Kaiser Wilhem I’s hundredth birthday.”


“Didn’t these people have to give up all their metal to support the war like the rest of us,” I ask. Plants are lined up next to the radiator, each of them growing out of a brass pot. My mind shifts to the time when we brought Mama’s copper pan and water kettle to the resource collection agency. Oma and Mama had even exchanged their wedding rings for thin iron rings and a certificate that praised them for giving “gold for iron.”


“The rich don’t have to give up anything!” Otto snorts. “Wait until you see their pantyr!”


We reach the kitchen at the end of a long hallway. The pantry is filled with sacks of flour, sugar, and lentils. Canned fruits and dried sausages are lined up on a shelf.


“How did they get all this?” I ask. Robert is already chewing on a piece of cheese he has taken from an earthen container.


“Don’t you know that the rich are not suffering? They have connections and money. And they look out for their own,” Otto says.

Schröder also has a knack for cliffhanger chapter endings, such as:

“Then we have this.” Aunt Martha gets up and opens the top drawer of her sideboard. When she turns around she is holding a revolver. The expression on her face shows me that she is determined to use it.


Early on in the book is one of the best cliffhanger chapter endings I've ever read. We’ve learned Moritz supports the government and the old regime as does his companion, or so we’re told. Moritz wants to be a reporter and he jumps at the chance to follow Herr Goldmann to a protest rally to cover it for the paper. That’s when Schröder hits us with this chapter ending:

“This woman has guts,” Herr Goldmann says approvingly. He scribbles something on his notepad. I don’t respond. I can’t tell Herr Goldmann that the woman is my mother. (dum, dum, dum! – MGN)

I’ve got more to say, but that’s where we’re going to have to leave it, Esteemed Reader. I’ve got to post this thing and get to my day job. Be sure to come back on Saturday and next week when M.P. Kozlowsky will be joining us. As always, I’m going to leave you with some of my favorite passages from My Brother’s Shadow as well as an inspirational video to remind you to tell your story with gusto and show the world who you are:


It’s already September, but late summer’s humid heat has returned; it clings to me like a hot, wet towel…
“Or what they call bread, nowadays,” Mama says. Before she sits down at the table she rolls up the sleeves of her blouse. The skin on her hands and arms is tinted yellow from the acid in the ammunition factory.
Mama smiles and lets her arms fall against her skirt. “You are too old for a hug, aren’t you, now?”
I don’t feel too old for anything. For a moment, I want to throw myself onto the floor and pound my fists against the carpet until Mama sits down at the sewing machine. But instead I watch her walk into the kitchen, where she opens the lid over the stove to stoke the fire. When I turn toward the sewing machine I see my own reflection in the windowpane, the reflection of a boy who should have known better.
Hedwig and Mama quickly set the supper table, and when we sit down Hans ravishes the food like a famished animal. I can tell that Mama and Hedwig take less to make sure there is enough for him. Mama asks about the food he ate during the war and Hans thanks her for the packages, describes stews and cold canned food. Yet the conversation feels strained. Hedwig just stares at her plate, and when she does look at Hans she nods as if she is hard of hearing and they are talking over a great distance. Mama keeps moving her hand behind her ear to fasten a strand of hair that has loosened. Then there is only the sound of Hans smacking his lips and swallowing the sausage.
“We’ll get the coffee faster if we take the streetcar,” Rebecca says, and points to one waiting at the corner. We step quickly inside and sis down on a bench in the back. The now is falling heavier now, and thick flakes melt, sliding down the windowpanes. There are no other passengers. Rebecca leans her head against my shoulder. I put my arm around her and bury my face in her hair. We are finally alone.

Email ThisBlogThis!Share to TwitterShare to FacebookShare to Pinterest
Labels: Book of the Week, Monika Schröder, My Brother's Shadow, Racism, Review, Saraswatti's Way, Schroder, The Dog in the Wood, Young Adult