Book of the Week: WAITING TO FORGET by Sheila Kelly Welch 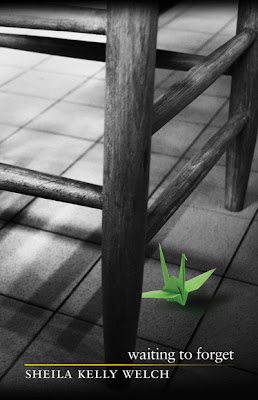 Meet T.J., also known as Timothy, also known as Terry Jerry, and “it’s not unusual” for him to be referred to as Tom Jones (cracking myself up this week). But he prefers T.J. (for most of the story) and he’s an eleven-year-old kid with an adult’s problems because there is no adult to handle his problems for him. When we first encounter T.J., he’s sitting in a hospital waiting room, which is an appropriate place for him to be given the title of the book. T.J. is waiting to find out whether or not his little sister Angela is going to die or not.

It’s a good hook, one we’ve seen before and one we’ll see again because some things just work and always will. Even before we know anything about the characters, we are at least somewhat curious about what’s going to happen. Just knowing a little girl might die and her big brother will have to be told about it is inherently suspenseful.

Welch can’t leave it here, of course. She still has to tell us what happened and who this little boy and little girl are to really draw us in, and she does, but it takes some pages and this premise will catch us on page one. Better yet, Welch doesn’t tell us the fate of the little girl until the very end, so to have your natural curiosity satisfied, you’ll have to read the whole book. And as we learn more about these children and come to love them as characters, the question of Angela’s fate becomes all the more compelling and pulls us right through the story. That’s why they call it a hook.

Another thing in Welch’s favor is that the tone of Waiting to Forget allows us to believe in the possibility that Angela could die, and that’s very important. Imagine, if you will, a television special in which one of those stupid care bears is critically injured (I would actually tune in if this ever happened) and the other care bears waited in the hospital to find out if Fuzzy Fluffington (I don’t know what their actual names are) is going to bite it. There’s no real suspense here because we all know by the end of the episode they’re going to gather together and do their deus-ex-machina care-bear stare that makes everything better like they always do and Fuzzy Fluffington will come back to life (please, please let him have acquired an unnatural appetite for the flesh of other care bears).

What I’m getting at is in order for the old will-one-of-the-main-characters-die-by-the-end-of-this-story hook to work, we have to believe the writer is willing to shoot her hostage. For this reason (among others), this hook is not appropriate for every story. But Welch has a crazy look in her eye. She’ll do it, man. The tone of Waiting to Forget is somber and realistic. A lot of very sad things happen before the end and the death of a little girl would, in some ways, be par for the course.

Esteemed Reader, you know I would never tell you whether the little girl dies or not, so let’s move on. Waiting to Forget is broken into two sections called “Now” and “Then.” Now is T.J. in the hospital with his new foster parents, but most of the novel is concerned with Then, which is everything that happened prior to Now. T.J.’s mother is, or was... well, I’ll let T.J. tell you:

Momma wanted to get out. She wanted to go have some fun. T.J. thought he understood. Momma was like the fragile green bug with transparent wings that had wandered into the living room one night. It had circled the lamp next to the couch where he and Angela were supposed to be sleeping. The little bug tried to get closer and closer to the light, which T.J. finally turned off, despite Angela's squeals of protest, just so he wouldn't hear the incessant ping, ping, ping of the bug hitting the bulb. In the morning, the insect was gone. Nightlife--bars and men and music--were like a lamp to Momma, drawing her away from home when night came.

Momma is a frustrating character. What makes a bad parent? Having been contemplating parenthood, this is a question I find myself asking myself often. Mrs. Ninja and I know a couple who allowed their little brat to run around yelling and making a mess during dinner and who only laughed when the punk kicked me in the face. Never have I been so tempted to spank someone else’s kid—he could use it, but Daddy just laughed, and it was his call. Now that’s bad parenting, but all things being relative, I wouldn’t recommend social services take away junior. Dad’s a jerk and he’s raising a little jerk, but this is America, and with so many kids homeless and/or abused, the kid’s better off than many.

Momma is the sort of mixed-up person your heart goes out to, but who you probably wouldn’t want to know. Welch shares enough of Momma’s back-story to make her briefly empathetic, but in the end she and her endless string of no-good boyfriends is the problem. Unfortunately, some of the best people in the word aren’t able to have children and some of the worst of humanity breeds like the inhabitants of Watership Down. This means the popularity of Larry the Cable Guy and Tyler Perry will only increase in future generations (shakes head sadly).

This story isn’t about Momma, or I would have stopped reading it after a few chapters. I have an old friend whose phone calls I dread because she has been on a path to destroy her life for a while and every time I talk to her, she’s a little further along. It isn’t any fun hearing what she’s been up to, I can’t live her life for her, and whatever she tells me, I know it’s not going to be good, because of the way she’s chosen to live. I try to miss her phone calls and I wouldn’t read a book about her. But my old friend doesn’t have children. She makes me sad, but I don’t want to shake her the way I wanted to shake Momma as I read Waiting to Forget.

Thankfully, this story is about T.J. and Angela. T.J. has to become Angela’s parent because otherwise she would have none. As much as I hated Momma, I liked her kids. I wanted to find out what happened to them. T.J. is a character who’s as relatable as he is because of the conflict that surrounds him. His goal is a happy home for he and his sister—what reader wouldn’t relate to that goal? The opposition against him is tremendous. This is a story worth reading and immediately interesting. What greater opposition can an eleven-year-old face than his own mother and her abusive boyfriends?

Waiting to Forget is an exciting read that has some very sad parts, but a few laughs as well, and leaves the reader with a sense of triumph among tragedy. I’m not going to say anything more as I don’t want to spoil the whole book, but pick up a copy. You’ll be glad you did. And when you do, ask yourself “what is the significance of T.J. telling us that his mother is dead,” which sounds like a craft point I probably should have discussed. But I’m not sure how to do it without ruining the novel. So, instead, I’ll remind you to come back on Thursday to read an interview with author Sheila Kelly Welch and leave you with some of my favorite passages from Waiting to Forget:

T.J. watched Momma leave, swinging her hips and her purse as she went down the front walk. Her reddish hair looked alive, almost like flames, licking at her shoulders. He knew she wasn't getting her hair done. She'd met a new man.


By the time T.J. got home from school that day, the dog had made a couple of puddles on the rug that were bigger than the dog.


Then he squints down at the sun picture, wishing it gave off heat like the real sun. The waiting room is chilly, the air clammy and stale, and he thinks he can taste disinfectant on his lips.


T.J. wished he were Spider-Man and could climb out a window and up the side of the building to the roof.

The day felt endless and dreary like the dark spring sky.

STANDARD DISCLAIMER: Book of the Week is simply the best book I happened to read in a given week. There are likely other books as good or better that I just didn’t happen to read that week. Also, all reviews here will be written to highlight a book’s positive qualities. It is my policy that if I don’t have something nice to say online, I won’t say anything at all (usually). I’ll leave you to discover the negative qualities of each week’s book on your own.
Posted by middle grade ninja at 8:30 AM

Email ThisBlogThis!Share to TwitterShare to FacebookShare to Pinterest
Labels: A Horse for All Seasons, Book of the Week, Middle Grade, Review, Sheila Kelly Welch, The Shadowed Unicorn, Waiting to Forget