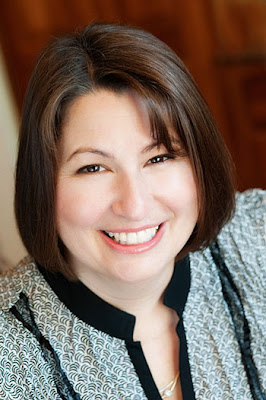 ELIZABETH LABAN worked at NBC News, taught at a community college, and has written for several magazines and newspapers. The Tragedy Paper  is her first young adult novel. She lives in Philadelphia with her family.

Click here to read my review of The Tragedy Paper.

I am always saying this or that book is on my top 10 list – and I know I have listed way more than 10 books in that category! So to narrow it down to three is really hard, but I will try. I have to say S.E. Hinton’s That Was Then, This Is Now is at the top – it was the first book I loved with all my heart. Next I will say What Alice Forgot by Liane Moriarty. That was the one I read most recently that I loved with all my heart. And I’ll say David Payne’s Early From The Dance. Now I know you might take this out, but the following books could also be in my top three: Scott Spencer’s Waking The Dead, Curtis Sittenfeld’s American Wife, Jane Smiley’s A Thousand Acres, John Green’s Looking For Alaska, Jennifer Weiner’s Good In Bed, and Jane Schwartz’s Ruffian: Burning From The Start.

(I never edit author responses, especially when I like the books being recommended -- MGN)

I spend a lot of time writing and reading, but the amount really depends on the week and how into a book I am. In addition to writing fiction, I write articles for various publications and I ghost write regularly, so I am always doing at least five to ten hours of writing a week. But when I’m deep into a novel all I want to do is be at the computer, so then I might be writing 30 to 40 hours a week. As far as reading goes, we are big readers in my house. We all read before bed – it’s how we wind down and get sleepy. So I am always reading 20 to 30 minutes a day at that time. But if I’m really enjoying a book and can’t put it down, then I put my work off and read instead.

Very long! I started writing novels well over 10 years ago. After much searching I found my wonderful agent Uwe Stender at TriadaUS Literary Agency. He agreed to represent me based on that first novel I wrote, which we both still hope to sell. But when we didn’t get an offer, I went on to write two other women’s fiction novels before deciding to write a young adult novel. I think the reason I have been so lucky is that Uwe saw me as a person with a potential writing career instead of a person who wrote one book that wasn’t a quick sell. That has made all the difference. He encouraged me to write a young adult book, and The Tragedy Paper was born. I worked on it for about a year, and it took Uwe only a few months to sell it to Erin Clarke at Knopf. That was another incredibly lucky turn of events. She has been so caring and careful with the manuscript. When the book hits stores on January 8th it will be a solid two years since she made the offer!

I almost hate to say this, because I believe almost anything can be taught if someone is open to learning, but I think there is something about a writer – finding a way to put words together with a certain rhythm - that is a talent people either have or don’t have. Having said that, I think everyone can improve with practice and great teachers. I don’t know where I fit into this because I don’t have much of a sense of my writing capability as a kid (though I did get an A on my tragedy paper!), but I do know that I’ve been taught by some of the best teachers and editors out there.

With fiction, I love that you can do anything, really anything, with your story. There is something else about writing – which I think is my favorite thing and my least favorite thing – and that is the idea that what you are writing – whatever your masterpiece might be – carries with it the possibility of reaching millions of people, or none. When I sit at my dining room table and write, and laugh, and sometimes cry, and I think I’m creating these memorable scenes with memorable characters – I have no way of knowing if this might be the thing that changes my life and really reaches people far beyond my usual circle, or if it is just going to be something that my husband and agent read, maybe a few editors, a few friends, and that’s it. It is such a strange endeavor in that way.

I could go on and on about not giving up, which I believe, and not reading reviews, which I am having a very hard time doing. But instead I want to share something that has become a bit of family lore. My husband and I met at journalism school and before we even began as students we both attended, though we had not yet met, an orientation weekend. At one point there was an award ceremony and a graduate of our journalism school won. She gave a speech which included the three most important things she learned in journalism school, and we have often joked that we could have walked away then because it was really all we needed to know (not really – we actually learned a lot, but still). The three rules of journalism that she shared are: show don’t tell; good quotes up top; and go to the bathroom when you can. They all make a lot of sense, and while they might be better suited to newspaper writing, I do think of them all the time.

I could take this in so many different directions. I could say S.E. Hinton because her writing had such a huge impact on me. I could say John Green because I am fascinated by how he hits it over and over again. I could say Sarah Dessen because we’ve met online through a friend and she seems really nice, in addition to being a great writer. I could say Jennifer Weiner, who is one of my good friends and one of the best lunch companions I know. But for the purpose of your question I’m going to say Barack Obama. For summer reading this year my daughter was assigned his book Dreams From My Father. We realized it was something we all wanted to read, so we listened to the book on tape – something we don’t do often enough. He reads it, so for those few days when we were driving from Philadelphia to Cape Cod and back again, it was like he was in the car with us. We loved the book, we loved listening to his voice. I am just fascinated by him as a person. If I could sit down with any author, I think it would be him. Now if only I can get his girls to read The Tragedy Paper!

Posted by middle grade ninja at 10:38 AM