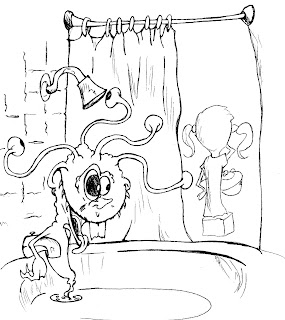 Guess what, Esteemed Reader! They're adapting Greenhorn by Anna Olswanger into a movie. Tomorrow we're going to feature our first ever interview with a filmmaker as Greenhorn's director, Tom Whitus, will be here to face 7 Questions. I'm looking forward to seeing the movie version of a Book of the Week and we're going to be following the production over the coming months.

Also, if you haven't read it yet, our old friend Susan Kaye Quinn writes an amazing blog I'd recommend checking out anytime. But right now she's live blogging a whole book called The Indie Survival Guide, and I am greatly enjoying her posts. We've been talking about all things indie this summer and if you've been thinking about going indie yourself, you owe it to your readers to invest some time with Susan's hard-learned advice.

It's going to be an interesting year, Esteemed Reader. If you read this blog regular (and you don't, because I'm very bad about regular posting) you know that Mrs. Ninja and I are expecting our first Little Ninja in December. I expect a baby will change my life in a million ways I can't begin to foresee now and already it's changing my life in small ways.

Adam Smith, my best friend since the third grade and one of the best men at my wedding, had a baby boy last week. I've been spending a great deal of time with him just recently working on a project I'll tell you more about soon--when it's ready to share, you won't be able to get me to shut up about it.

Adam's an artist. The drawing above is an illustration of his from a children's book we published in college. He'll kill me when he sees I'm sharing it as that's an old one, but his new work isn't ready to share yet. It amused me over the weekend to see him dividing his time between inking a horrific poster of zombie carnage and feeding his infant son. It was a preview of things to come in my own life as I'm sure I'll be dashing from the nursery to my writing office and back again.

As for the book, please don't bother looking for it. There's a reason I've been running this blog for years and this is the first time I'm ever mentioning I self-published a novel. If you never did anything stupid in college, I suppose you're right to judge me, but I'll wager most of your college shenanigans are far more interesting than indie publishing a below average book for children.

I loved the book and I still do. I'm not sorry I published it, but I'm not mentioning the title because I don't want you finding it and being disappointed when you discover it reads like a book written by a too-young writer uncertain of his voice and craft. But don't let me convince you not to read it. Let me share with you a one-star review it received titled "Not For My Kids:"

After reading favorable reviews comparing this book's interest level to Harry Potter, I purchased it, expecting a charming, exciting nighttime read with my three children, ages 11, 8, and 6. Within just the first few chapters, I could tell that I had made a mistake. First of all, I did not see the imaginative writing and illustrating I was promised. Instead I found amateur artwork, design, and story development. I abruptly read about a young boy left at home at night while his father worked because his mother had left them (unsettling for young listeners). And once Jim starts hearing and seeing "monsters," that was it. My youngest two children (who have listened to many pages of Harry Potter) were too scared to continue and didn't even want the book in their rooms. This was not what I expected from the reviews.

To be honest, I've always loved this review. For me, the worst possible reader reaction would be no reaction and a part of me is still thrilled to have so terrified an innocent woman and her children. The more rational, mature me, however, realizes publishing before I had enough experience to know what I was doing was a mistake.  I'm embarrassed that poor woman spent money and came away with an inferior product that did not accomplish it's intended purpose.

My indie publishing experience was an epic fail. The illustrations were a nice touch and I think the format holds up, but fortunately, this all happened many years ago before the advent of ereaders. Adam and I had to take our book door-to-door and found not one bookstore willing to support us, probably because we looked like punk college kids without any money. We did, however, convince a local chain of Papa John's to hand out coloring sheets for a time. We sold some pizza, but no books:(

It's easy to forget how fast the world changes and preferable to forget how rapidly I'm aging, but when I went indie more than a decade ago now (big sigh), the world was a different place. Paper books and big publishing reigned and indie authors lacking their own pre-existing distribution network were dead in the water, especially if their only means of promotion were delivering pizzas with coloring sheets attached:)

For my birthday I received a high definition Kindle Fire (it's so awesome) and if you don't own such a device, you need to get one. I used to stop by the bookstore at least twice a week to get a read on the market, but they closed all the bookstores near me and now I have to drive across town--and I live in Indianapolis. In the surrounding towns, readers have their libraries and online retailers, though there's still one or two used bookstores in operation.

Now, instead of driving across town and committing time I don't have to browsing, I can lay in bed at night and browse the Kindle store. I read samples of books and check out the reviews and if I'm convinced to take a chance, the author receives my money a click later, not if I remember next time I'm in the bookstore. I know indie booksellers are cursing me at this moment so I should add I do still drive across town and support Kids Inc as should you.

But thanks to ereaders, I can peruse the titles of indie books I never would've had access to otherwise. It's an exciting time to consider indie publishing as a distribution network at last exists so that you can write something in your pajamas and I can buy it in my pajamas. If you want your book to reach me, you don't have to drive across the state to a printer, get a big box of books, and then take them door to door with pizzas. You can put your book up online and anyone in the world could potentially read it.

But should you? For my part, I'm glad the online distribution network did not exist when I tried my experiment in self publishing. Lack of distribution saved me from myself. Think long and hard before you indie publish. I'm all in favor of writers doing it, but unless you want some reader of your blog more than a decade later discovering your book and then emailing you, necessitating your writing a confession post about it, make sure the book you're publishing is ready to be a part of your permanent record:)

Posted by middle grade ninja at 8:05 AM