ALL TOGETHER NOW: A ZOMBIE STORY Chapters 11-14 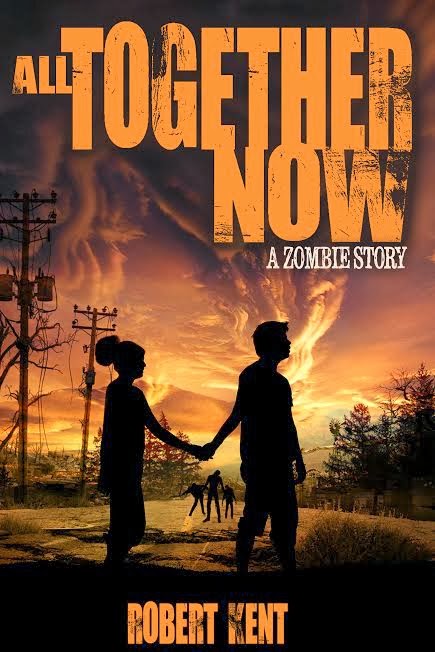 
THE COAST IS CLEAR WAS the thought that went through my head over and over again.
Even as my eyes took in the smeared red handprint across the glass of the front doors, my mind insisted the coast is clear.
I was just outside talking to Levi and the coast is clear.
That handprint doesn't exist; it cannot be there because the coast is clear.
Beyond the glass doors of Ernie's, beyond the handprint, Levi was screaming.
The front of his royal purple shirt was dripping maroon. I didn't see how there could still be enough life in him to scream and struggle.
There were three of them:
One gnawed Levi's right arm, loose white flesh spreading out on either side of his mouth like the skin of fried chicken.
One clawed at Levi's stomach, her greedy hands ripping everything inside him out and sampling it.
The last one stood behind him, biting into his collar-bone and causing blood to stream down Levi's chest.
Levi's eyes were wide, conscious, bulging.
I read once that a person being stabbed doesn't feel anything after the first or second thrust when shock takes over, but the way Levi stared through the glass into my eyes, I know he felt everything.
And then he wasn't staring at me.
He spoke a single word: "Please."
The skin of Levi's throat caved in, forming a black hole that spurted blood, and his head snapped backward. His body went limp, but the zombies feeding on him paid no attention.
I didn't hear the gunshot until I'd seen the round bullet hole in the glass door just above Levi's handprint.
My brain couldn't process the sound until I turned and saw Michelle. Tears pooled on her cheeks, but her eyes were focused on the sight of the gun aimed straight ahead.
Then I couldn't stop hearing the gunshot.
I didn't know how quiet the world had gotten until that one shot rang out and out and out and every creeping, moaning thing in Harrington heard it.


MICHELE FIRED AGAIN. THE DEAD woman in the yellow dress pulling out Levi's intestines fell over.
The other two went on feeding.
"Stop," I said.
Another gunshot.
The zombie gnawing Levi's collarbone dropped him and fell back.
The zombie munching Levi's arm tightened its grip, but went on eating.
"Stop!"
Michelle didn't look at me.
"STOP!"
A spray of blood erupted behind the head of the last zombie. He toppled.
The gunshot sounded like a cannon.
"Are you crazy!?!"
Michelle lowered the gun and slapped a hand to her mouth to quiet a sob. "They were—"
Sob.
"They were—"
"He was dead!"
"They were eating—"
"He was dead! They hadn't seen us!"
Michelle's eyes widened and I knew she understood.
I stepped toward the glass. Two of the zombies lay still on either side of Levi's body. The third, a woman in a yellow dress, a yellow church dress, lay twitching at his feet.
Levi's eyes opened, all white.
His head turned toward me and his lips grinned.
I saw them first in my peripheral vision:
At least 20 zombies were stumbling up the street toward Ernie's and more were pouring out the open doors of the brick church.
They came slowly, each shuffling step heavy, their feet dragging. Many of them were in suits and nice dresses and they moaned in unison, a hymn of the dead.
"Oh no."
Levi's body sat up, causing more guts to spill from his torn stomach. He moaned and there was nothing of Levi in that sound.
I turned to Michelle.
"Back door," I said, and got moving.
I pressed the rear exit's metal push bar.
Nothing happened.
I tried again, and still the door wouldn't open.
I pounded against the frame.
"You have to unlock it," Michelle said.
She was right. A red label above the push bar warned an alarm would sound, but the only noise the door made as I shoved it open was a metal creak.
The first thing I saw was the sun, high, bright and blinding. The second thing was the dark outline of a zombie I didn't realize was Chuck until he lurched toward me, dragging the handle of the catchpole fastened around his neck behind him.
Keep him safe, Ricky.
I was glad he'd followed us, and if it had just been him, Michelle and I would've made a run for it. But eight more zombies came shuffling behind him.
They snarled at the sight of us. Their steps quickened.
These zombies weren't members of the church. Three of them had green uniform shirts with a gold patch stitched on the shoulder that told me they came from the jail. The other five looked like they'd escaped the cells.
I said some words I'm not writing and slammed the door closed.
I shut my eyes and pressed my head against the door. I had to think, had to figure a way out.
Behind me, I heard the WHAM! WHAM! WHAM! sound of zombie fists we'd been living with on and off all night, though it was louder and more motivated now that they could see us.
And then a new sound: shattering glass.


THE GLASS ON THE FRONT of Ernie's is strong. It might not hold up to bullets like the glass around the counters in Indianapolis gas stations, but you have to hit it really hard and you're more likely to break your hand before you break the glass.
But if you're dead and don't care about your hand and have six dead friends to help, you can get it smashed in about nine fist pounds.
Levi was the first to get his hand through the glass and inside the store. By that time his fingers were raw nubs and the falling glass took chunks of his forearm with it. If it bothered him, it didn't show.
His milky white eyes were locked on Michelle.
Zombies from the church crowded behind Levi. The entire front lot of Ernie's was covered in walking corpses, their moaning so loud it was as though it was coming from speakers at the front of a rock show.
The stench of their unwashed, festering flesh poured through the broken windows.
I held my breath to keep from being sick and raised my bat.
Michelle aimed the gun—no point worrying about gunshots attracting zombies now.
The first shot blew a hole through the chest of an overweight dead man in a short-sleeve shirt and tie. He stumbled back a step, paused as though puzzled, then came toward the window, the incident forgotten.
Her second shot struck the head of a dead woman in a blue dress. She fell over and didn't rise again.
Then Michelle was out of bullets.
She pulled her pack off her shoulders to get more.
A fat woman in a white dress and high heels was scrambling through the broken window, shredding her gut on the glass and knocking over bottles of oil and antifreeze.
I brought my bat down and missed her head.
I struck her meaty shoulder making a thwack sound. That arm went limp, so she shifted her weight to the other arm and kept coming.
I swung from the side like I was knocking it into the stands and hit her directly in the temple.
Her skull gave with a dry crack.
Blood and brain splashed my chin and neck.
The fat woman did a face-plant on the floor and stayed still, but by that time two dead men were crawling through the windows to my left.
I chanced a look back and saw Michelle on her knees, groping for bullets she'd dropped.
It took three swings to bring the first dead man down, but by then I was warmed up and I brought the second down with only two.
Not that it made much difference.
The front doors of Ernie's burst open and the horde poured in.


I KEPT SWINGING AS I retreated backward. There were too many to strike down even if I had a bat in each hand and they came at me one at a time.
Five zombies were trying to come through Ernie's front door at once and they blocked each other like too much meat clogging a grinder.
But there were three already inside and four more climbing through the broken windows.
I swung at the closest, smacking his head so hard his beard snapped past his shoulder. The dead man collapsed.
There was no room for us to escape the front of Ernie's. Zombies blocked every exit.
And there was no getting out the back door. We needed—
"Ernie's office!" I shouted as I swung the bat into the face of a dead teenage girl. I struck her in the forehead hard enough to knock her back, but not hard enough to break her skull.
I turned to Michelle, who was putting the last of the dropped bullets into the revolver. She snapped the cylinder shut and aimed.
"There's a ladder in Ernie's office! It leads to the roof."
Michelle nodded and fired. The face of the dead woman nearest us exploded.
The mess of zombies at the front door untangled and they came in two at a time.
I swung into the temple of one last zombie before I ran to the office.
Michelle fired the gun, which was followed by the soft thud of a body, barely perceptible beneath the snarling.
I went around Mrs. Ernie, one of the only dead people in the store actually behaving like a dead person, to the ladder rungs attached to the wall.
As I climbed toward the open hatch in the ceiling, two more gunshots sounded.
"Michelle! Come on!"
I lowered myself a rung so I could see what was going on in the shop. Another gunshot sounded, then Michelle came running into the office.
The corpses came in just behind her.
"Climb!" I yelled. "Climb!!!"
I waited until Michelle had her hands on a rung, then I scrambled the rest of the way up and crawled onto the roof.
At first, I saw only direct sunlight, blinding in its brightness. When I looked left, I saw the face of a corpse and raised my bat. I lowered it when I realized this corpse was actually dead.
It was Ernie. I could tell that much from what was left of his face and his uniform shirt which had a stitched nametag.
A revolver lay less than a foot from his hand.
I understood what had happened: Ernie had taken care of Mrs. Ernie downstairs, then come up here and taken care of himself.
Michelle screamed.
I turned back. Both her hands were clutched on the top rung of the ladder so tightly her knuckles were white.
But her feet swung free, kicking into the faces and hands of the dead clutching her ankles, trying to pull her down.

Want to know what happens next? Get the book here:)