Nick Goss and I discuss self publishing, home schooling, his bought with Covid-19, writing secular stories as a Christian, the pros and cons of social media, the importance of organizing a writing schedule, producing output that meets your personal standard, stories that are premium Nintendo good, a tale of the supernatural, and so much more. And, bonus, if you stick around to the end, I reveal a few behind-the-scenes tidbits about the podcast. 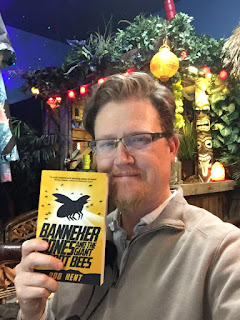 NICK GOSS has been a piano teacher, sailboat builder, private investigator, barista, and salesman. He has a collection of more books than he could possibly read in his lifetime and lives with his head firmly stuck in the clouds.
He resides in Nashville with his wife, two kids, and their labradoodle, Shelby. His host of eccentric hobbies include woodworking, sailing, fencing, ping pong, hammocking, and playing the penny whistle.
Can you imagine what his neighbors must think?
Yeah. You guessed it: he was homeschooled.
The Traveler’s League Book Series was born when he strayed from the normal bedtime routine of reading, and instead created new worlds full of funny characters, action, magic, and adventure. Since then, he has committed himself to entertaining children through writing books that make kids feel the magic of adventure and friendship. All the books in the series are available on Amazon. 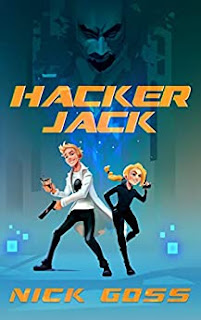 Kids who love coding, inventing, and video games will love this first episode in a multibook action series about a pair of siblings who find themselves facing off with evil to save the world.

The President has been kidnapped -- inside a video game that 11-year old Charlie Bakowsky invented. Now Charlie and his sister Lora must team up to outwit and out fight the kidnapper. But that will mean battling an evil genius inside the video game world of BattleBlox. 8-year Lora has ninja-spy skills, and her brainiac brother Charlie knows all the cheat codes  -- but Hacker Jack stands in their way.

NickGossWrites.home.blog/
Posted by middle grade ninja at 9:23 AM