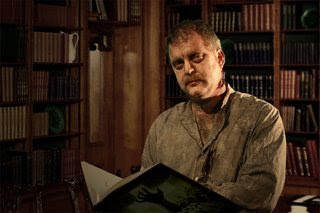 Here is the official bio of Kim Paffenroth from his blog: "I am a professor of religious studies, and the author of several books on the Bible and theology. I grew up in New York, Virginia, and New Mexico. I attended St. John's College, Annapolis, MD (BA, 1988), Harvard Divinity School (MTS, 1990), and the University of Notre Dame (PhD, 1995). I live in upstate New York with my wife and two wonderful kids. Starting in 2006, I had one of those strange midlife things, and turned my analysis towards horror films and literature. I have written Gospel of the Living Dead: George Romero's Visions of Hell on Earth (Baylor, 2006) - WINNER, 2006 Bram Stoker Award; Dying to Live: A Novel of Life among the Undead (Permuted Press, 2007); Orpheus and the Pearl (Magus Press, 2008); and Dying to Live: Life Sentence (Permuted Press, 2008)." Mr. Paffenroth is living my dream of being an award-winning horror novelist and I am so excited that he agreed to do this interview. I love zombies and I love books that examine religion. Mr. Paffenroth had me at hello.

In my job as professor, I am expected to publish academic nonfiction on the subject I study - in my case, religion, especially Christianity. I did that for years, and my examinations kept moving outward from my original field of study: I was trained in Biblical Studies, but I started looking at Christian themes and ideas in great literature, and then in pop culture, culminating in my book Gospel of the Living Dead: George Romero's Visions of Hell on Earth (Baylor, 2006), which won the Bram Stoker Award. While I was working on that, I got the idea that maybe, instead of just looking at other people's zombies, I could create my own zombie fiction, in which the zombies would do and mean and symbolize whatever I wanted them to. It's been a fun couple years working on that since.

Born, I think, though that's no excuse for people not taking advice and not trying to improve their craft by learning rules. And I don't think it's a steady or predictable curve for anyone. My experience was that I wrote (bad) fiction constantly in middle and high school. I found the handwritten pages recently and it was weird and humbling. But when I went to college, I stopped and didn't write for years. I think I (finally) realized that I didn't have anything important to say, and I didn't have the skills yet anyway. So I just read and read. And then I started my nonfiction writing, which brought me back to the fiction after many more years. I doubt that's a typical journey, and I didn't plan it that way, but it's how it worked for me and I'm grateful.

Favorite: Thinking about a character I've created as though s/he is a real person. Sort of a "What would ____ do?" moment in the day - and I can give a real answer to that, because I know him/her so well, and I value his/her opinion. That's chilling and exciting. Especially if the character's a flesh-eating zombie.

Least favorite: Marketing the thing. I can't stand it. People even use the term "pimping" now as the verb for that, and it's accurate, because you feel like you're sullying your creation and yourself. And then you get the check, and you think, "ZOMG - I just made a complete pest of myself on the Internet for three months, and THIS IS ALL?"

Don't quit your day job? Get used to living on ramen noodles?

Well, having said my route wasn't typical, I'd nonetheless endorse one part of it: read a lot, and not just genre stuff, either. Reading great works gives you a feeling for language and an awe at great ideas - and those are good qualities to have, even if you never make it as a writer on your own.

Oh, Dante, of course. It's hard to imagine in our modern world someone as devout as he, and yet as devoted a sensualist - someone so simultaneously intoxicated by God and earthly beauty and delight. I can imagine a three hour lunch with him - four courses, two bottles of wine, and we're talking about God and the soul the whole time, and discreetly checking out the beautiful ladies who walk by. Oh yes, that would be an afternoon to remember.