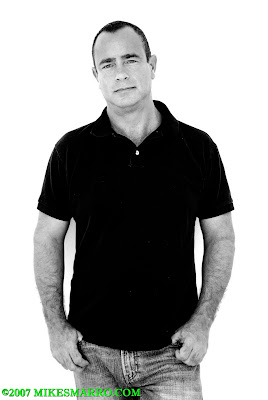 Rick R. Reed is the author of ten published novels and two collections. His short fiction has appeared in more than twenty anthologies. He has won the EPPIE Award for best GLBT Novel of 2008 (Orientation) and www.queerhorror.com named his novel A Face Without a Heart as the best novel of 2000. Recent notable work includes Bashed, about a horrific gay hate crime and its aftermath; IM, about a serial killer using gay online hookup sites to procure his victims; a vampire love story set called In the Blood; and a paranormal page-turner about a psychic reluctantly caught up in the murders of two teenage girls in her small western Pennsylvania town called Deadly Vision. Rick lives in Seattle, WA with his partner, where he is forever at work on another novel. For a complete bibliography, excerpts, reviews, and more visit him on the web at www.rickrreed.com. Or check out his blog at rickrreedreality.blogspot.com.

Do you know how difficult that question is? Starting from about the age of five, I have hardly ever NOT been reading a book. At my age, that means I've read thousands, maybe tens of thousands, and you want me to pick three? Sheesh! Okay:

1. In a Shallow Grave by James Purdy (Purdy is one of our best American authors, in my opinion, and horribly underrated; this is one of his best)

2. Edith's Diary by Patricia Highsmith (Highsmith wrote tough, provocative, wicked, and thoughtful crime/suspense, which I love, but this book is one of her oddest: a portrait of a woman's descent into madness--and she doesn't even know it, but we do, and it's chilling)

3. A Confederacy of Dunces by John Kennedy Toole. Hilarious, bizarre, and one of the only books I have read over and over. It's too bad it was published after the author's suicide; who knows what brilliance we missed?

Roughly, I spend about 10-15 hours a week actually writing fiction (but many more than that thinking about it and making notes...and then there's the promotion, which is almost as much work as the writing). I wish I had time to read more; but my schedule allows me only about an hour a day, if that, to sit down and read. Right now, I'm reading Dead as a Doornail by Charlaine Harris (part of the Southern Vampire Mystery series upon which the HBO series True Blood is based). It's pure escapist fun.

Called Stephen King's agent; got told they don't look at unpublished writers; asked if I could just write to them; bugged them for three months; they recommended my first agent who sold my novel Obsessed to Dell for their new horror line, Abyss. Simple, right?

I believe that artists are born and craftsman are made. Good writers are a combination of both. I hope I am both. I have had the benefit of a wonderful creative writing professor (the late Milton White at Miami University) for my craftsman side and a warped, lonely childhood with numerous head traumas for my artist side. It works for me.

I wouldn't eat with a dead writer because he or she would stink and that would spoil my appetite. Next to being a writer, I am a foodie and anything that gets in the way of my enjoyment of food is a deal breaker. Besides, eating with a dead writer would just be stupid. What kind of entertainment could a rotting corpse possibly provide? I suppose if I had to sit down with a living writer (and do I have to?), I suppose I'd love to have lunch with John Waters, whom I adore. And I have a movie idea I'd like to pitch to him.