Book of the Week: EMMA’S RIVER by Alison Hart 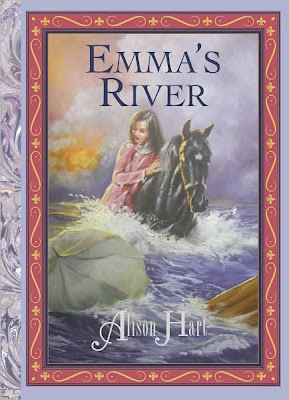 Do you like horses, Esteemed Reader? How about steamboats? Well, if you’re like me, you like horses, steamboats, well-written middle grade historical fiction, and you’re going to love Emma’s River. I certainly did.
I’ve never written any historical fiction. Probably because I have enough trouble doing the research to figure out how characters might react to the current age. I would have a heck of a time adding even another layer of research to my writing. But Alison Hart is more gifted than I and her ability to weave historical facts into her narrative and create for the reader the world of the past is worth studying. More on that in a moment.

Before I get to the book, let me just start by praising what a superior product Peachtree Publishers has put together. I know it’s a little unusual to praise a book’s binding in a review, but seriously this book is so nice it’s a pleasure to hold it in your hand and I like the look of it on my shelf. Everything from the artwork to the layout of the pages to the spacing of the words to yes, the binding, are all top notch. We’re told as children not to judge a book by its cover, but most kids do anyway, and this is a book that was built to attract young readers and sustain any amount of rough treatment (it’s got a thick hardcover).

Okay, enough with that stuff. Let’s talk story. The year is 1852 and ten-year-old Emma Wright is traveling up the Mississippi with her pregnant mother on the steamboat Sally May. Also traveling with Emma is Twist, her horse, and it is Emma’s love of Twist that drives the story. Twist is mistreated by deck hands and stored below the main ship where Emma will not be able to see him for the full four days of their journey. Well, plucky girl that she is, Emma finds ways to sneak down to see Twist and make sure he’s well taken care of, despite the various adults who conspire against her. She makes friends, she learns about the world around her, and the nature of true social justice. Better yet, the book culminates in an action blow out that I won’t spoil here, except to say that I was moved by the sad parts of the story and I truly enjoyed the finale.

So there you have it, Emma’s River is a fine book, well put together, well written, and worth parting with your money for. Everything else I have to say will be directed toward fellow writers, because Alison Hart has got mad skillz and her work is worthy of a little more analysis. The first thing to notice is that Hart doesn’t dumb down history for kids, which I respect. She doesn’t dwell on the unpleasant aspects, but she doesn’t omit them either. Emma and her mother are white and privileged, but there are plenty of Negroes (the right word for 1852), Indians, and Irish people in the story, and Hart doesn’t pretend they were treated any better than the facts suggest. Here is how she handles the plight of a native American man:

“Mist LaBarge, did you see the Indian on the hill?” Emma asked.
“Aye.
“Was he not preparing to attack us?”
He shook his head. “The Indians in this area won’t attack. Too many of them have been wiped out by cholera and smallpox. Others starve on reservations because settlers have taken their land. The rest trade trinkets or beg food to survive.”

Hart’s rendering of history with an eye toward the mistreated underclass reminds me of my favorite historian, Howard Zinn, who’s A People's History of the United States should be taught in classes everywhere rather than the doublespeak dreamed up by Texas text book publishers (that’s a rant for another post). But there are a number of historical books for kids and otherwise filled with a fantasy version of the United States that never existed and that I would not allow my kids (when I have some) to read. I would let my kids read Emma’s River because Hart tells the truth about the bad stuff and in so doing gains my trust regarding her reliability for the rest of it.

Emma’s River is clearly written and published with an eye for school libraries and the classroom. There’s a seven page section at the back of the book filled with factual information about life in 1852 and steamboats as well as a list of material references and a webpage. So if teachers wanted to incorporate Emma’s River into their history lessons, Hart and Peachtree Publishers have made it easy for them.

But for all of that, Emma’s River doesn’t read like a boring history lesson at all! Hart’s most amazing accomplishment as far as I’m concerned is that she has found a story vehicle that delivers historical information as it entertains. Her facts, which in the hands of a lesser writer would have slowed the story faster than exposition, are used to propel the story forward and are presented in the most exciting possible manner. I want to leave you with one last excerpt from early in the book and the thing to notice is that every detail Hart presents is made relevant to the story by its relationship or potential relationship to Emma. Great stuff:

“Aye, I can read these rivers like a schoolgirl reads a primer.”
“Read a river?” Emma repeated.
“Look here. I’ll show you.” The pilot waved her closer. Emma stepped next to him. If she stood on tiptoe, she could see out the open front of the pilothouse. The sun was slowly setting, turning the river into a golden-red ribbon.
Mister LaBarge pointed ahead. “See those ripples in the water to yer left?” She nodded. “See how they slant? That tells me ‘gravel reef ahead.’ If we hit that reef, Sally May could stop dead in the river. “
“We don’t want that.”
“Nay, we do not. Traveling upstream, the Sally May’s slow enough.” He pointed to the right. “See that circular whirl? That signals a snag.”
“A snag is a tree that’s fallen into the river,” Captain Digby explained. If the Sally May is unlucky enough to ram a big one, it could split her hull and we’d sink.”
Emma gasped. “Sink? Just like that?”

And there you have it. Hart just taught us something important about life on a steamboat in 1852, but it didn’t feel like learning. Partly because I’m sure she cherry picked the most interesting details (nothing wrong with that), but also because what we learned about felt relevant. To paraphrase one of my favorite lines from Jaws: “Boat goes in the water. Emma goes in the boat. Deadly Snag is in the water. Emma sinks in the water. Our Emma. Farewell and adieu to you fair Spanish ladies…”