Book of the Week: IVY’S EVER AFTER by Dawn Lairamore 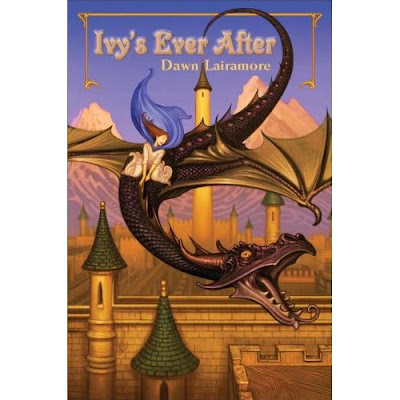 Do you like fantasy and fairytales, Esteemed Reader? You do! Well then, here’s a fun one for you. Ivy’s Ever After made me feel small and tucked snug in my bed as though some parent were reading the book to me. This was, of course, not the case. I can’t imagine Mrs. Ninja putting up with my parents coming over to tuck me in and read a story at night now. But Ivy’s Ever After is a bedtime story if I ever read one and if you have younglings about in need of a good story before night night, this is one to read. And it’s fun for adults too.

Check back on Thursday when author Dawn Lairamore will be joining us to face the 7 Questions. But today, let’s talk about her wonderful book. And it is a wonderful book filled with trolls, dragons, a princess, and all manner of other classic fairytale fun. But there’s also a lot of humor and I guarantee you’ll be cracking a smile while you read if not right out laughing. The pace is tight and young readers aren’t likely to have time to lose interest, and there are many wonderful descriptions worth rereading. I’m hoping Dawn Lairamore is a writer we’re going to be hearing more from and I’m looking forward to it.

Whew. Well, that’s enough review. Let’s talk craft. You know how literary agents and editors claim they only read the first page, or in some cases just the first paragraph to decide on whether or not they’re interested in acquiring a book? Well, they do, and for more on the impatience of agents check out one of my favorite agent blogs, Janet Reid’s Query Shark. Reid doesn't even represent what I write. But she writes a mean blog and I love reading it. The shark will convince you that writers have to hook agents, editors, and readers from the first page of the book if not the first sentence. This is a challenge, to be sure. Here’s how Dawn Lairamore did it:

Ivy might have been a proper princess if her mother had lived, or her fairy godmother had seen to her upbringing instead of vanishing without a trace one winter’s night, or her father hadn’t lost his mind. But as it happened, her mother did die, her fairy godmother did vanish, and her father did lose his mind, so Ivy never really had much of a chance one way or the other.

I reread this opening at least five times and now I’ve typed it out, which proves I can at least reproduce good writing :) This opening is awe inspiring. And it’s not just a gimmick, either. Every one of these details is important to the plot. I like to imagine Dawn Lairamore as a cougar crouched low and hiding in tall grass. The unsuspecting reader happens by, opens the first page of Ivy’s Ever After, and Rarh! Lairamore pounces and drags the reader helplessly into the grass to be sucked into the story whether they were in the mood for a fairytale or not. Even The Query Shark couldn’t swim by that opening.

The reason this opening is such a masterpiece is conflict. This book is dripping conflict. You may remember we talked conflict two weeks back in Bonnie Doerr’s Island Sting. In that case, conflict was a series of obstacles to be overcome, each more exciting than the last. There’s some of that in Ivy’s Ever After as well, but the main conflict is an ever escalating situation that puts the screws to Ivy and the reader. It’s the sort of conflict Stephen King specializes in.

The initial conflict is that at age 14, the princess of Ardendale is to be locked in a tower. That’s bad news for Ivy, princess of Arendale. But wait! The tower is guarded by a dragon. That’s worse. Ivy must stay in the tower until a prince comes to slay the dragon, after which he gains her hand in marriage and the throne of Arendale. Sucks for Ivy. But wait! The prince who comes is a power hungry jerk who is arrogant. Ivy can’t stand him and would never want to marry him. Even worse, the prince is a great hunter and he has the skills to easily do away with any dragon. Even worse than that? Once king, prince jerk face plans to have Ivy and her father killed!

By the way, I have to share this passage with you, as this is by far the most plausible and clever explanation for locking a princess in a tower I have ever read:

"You see, before the dragon slaying, it had always been a bit difficult to marry off the princesses of Arendale,” Tildy said. “Not many princes were willing to journey all the way to our far-off kingdom just to find a wife, not where there were plenty of perfectly good candidates from much larger and fancier kingdoms nearby. But the chance to slay dragons and claim their treasure was an enticement only Arendale could offer. The king knew that if there were no dragons to draw suitors, the royal family could very well die out."

The great sage of story, Robert McKee recommends writers start with the question: “What is the worst thing that could happen to your character? How could this turn out to be the best thing?” It is a mistake for me to say that conflict drives a story as this is not entirely accurate, though it’s certainly what draws the reader in. What drives the story is the protagonist’s response to the conflict. Will Ivy rise to the challenge? How can Ivy fulfill the second part of McKee’s question? I’m not going to tell you, but her finding the way to do this is what will keep readers turning pages to the end.

And Ivy is a likeable character. She is no faint, proper princess—notice how those sort almost never star in their own fairytale? It’s because they’re boring and readers are unlikely to sympathize. But Ivy is plucky and courageous and unwilling to just wait in the tower for some prince to save her. She, minor spoiler, befriends the dragon who guards her tower and they plan to work together to stop the evil prince from slaying him. Without knowing anything else about her, don’t you find you like Ivy? It takes some doing to woo a dragon and it’s a pretty clever solution to her problem. Of course, this friendship is just the jumping off point for further conflict, but I’m not going to ruin the whole book for you.

And we’re out of time. Don’t forget to come back Thursday to learn more about Dawn Lairamore. And as always, if your opinion differs from mine, please let me know in the comments.

STANDARD DISCLAIMER: Book of the Week is simply the best book I happened to read in a given week. There are likely other books as good or better that I just didn’t happen to read that week. Also, all reviews here will be written to highlight a book’s positive qualities. It is my policy that if I don’t have something nice to say online, I won’t say anything at all (usually). I’ll leave you to discover the negative qualities of each week’s book on your own.
Posted by middle grade ninja at 6:33 AM

Email ThisBlogThis!Share to TwitterShare to FacebookShare to Pinterest
Labels: Book of the Week, Dawn Lairamore, Ivy and the Meanstalk, Ivy's Ever After, Middle Grade, Review, Robert McKee