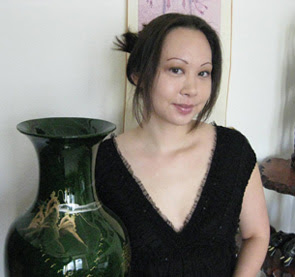 Dawn Lairamore is the author of Ivy's Ever After. Click here to read my review. She has always loved fairy tales but thinks you can only take so many sweet, proper princesses and ferocious, fire-breathing dragons. She thought it would be fun to write a fairy tale where the princess and the dragon weren't what you expected. She can't embroider or walk with a book balanced on her head, so, much like her character Ivy, she would make a pretty terrible princess. Visit her online at www.ivyseverafter.com, where you can read Chapter 1 of Ivy's Ever After. And now sit back and watch as Dawn Lairamore faces the 7 Questions:

Okay, this is going to be tough, but I would say Jane Eyre by Charlotte Bronte, Pride and Prejudice by Jane Austen, and Beauty by Robin McKinley.

I started writing IVY'S EVER AFTER because I love fairy tales, and this idea for a fractured fairy tale where the princess and the dragon team up against the handsome prince popped into my mind one day, when I was home sick in bed. I imagined it would be a lighthearted, funny story where neither the princess nor the dragon were what you expected--the princess would be fun-loving and improper, the dragon would be timid and undragonly. They would go on this grand adventure together so the princess wouldn't have to marry the handsome prince and the dragon wouldn't have to be slain by him, and they'd end up becoming friends. Over the next several weeks, the story whirled around and around in my mind and wouldn't go away until I put it down on paper. A million years later when I had a finished manuscript (okay, it wasn't quite a million years, but it sometimes felt like it), I started sending it out to literary agents. My agent found a fantastic publisher, and IVY made its way into the world!

Both. There is no doubt in my mind that some people are born storytellers. And for some people writing comes very naturally. Others have to work at it, and, with practice, become very good.

I've always had a love of great stories, and the urge to be a storyteller has always been there, so that's a very natural part of my personality. As for the actual writing itself, sometimes it comes easy and sometimes it's a little more of a struggle.

My favorite thing about writing is creating a world that's all your own and populating it with whomever you want, even creatures that would never exist in real life. Where else are you going to have that type of power, lol? And even when you think you're in control, somehow things pop up that surprise you, which is good, because hopefully they will surprise your readers, too, and that makes for interesting reading.

I would say my least favorite thing about writing is getting rejections, ugh!

Read and write. I know that sounds unbelievably obvious, but it's one of the most basic and useful things you can do. You should read extensively in the genres that you are interested in writing. Study authors' techniques, learn what you think works and what doesn't, from a reader's perspective. If you stumble upon a book that you find well-written, read it again. Decide what makes it well-written and how you can incorporate some of the same strategies into your own work. It's also helpful to keep current so you don't accidentally write something very similar to a book that's already out there. And writing--well, that's pretty self-explanatory. Writing is a skill like any other. It gets stronger with practice, practice, and more practice.

Jane Austen. She was such a keen observer of the human condition, and I love her wonderful, wry sense of humor. I think it would be fascinating to sit down and have tea with her.

Posted by middle grade ninja at 5:25 AM

Email ThisBlogThis!Share to TwitterShare to FacebookShare to Pinterest
Labels: 7 Questions For Writers, Dawn Lairamore, Interview, Ivy and the Meanstalk, Ivy's Ever After, Middle Grade