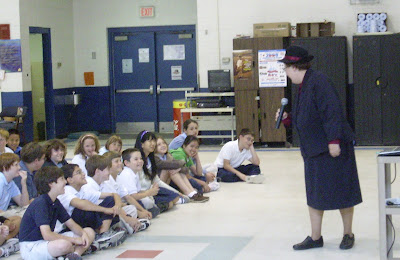 British-born Annette Laing is author of The Snipesville Chronicles, a series of novels about the adventures of three kids who time-travel in British and American history. Click here to read my review.

Dr. Laing is also a historian of early America and the Atlantic World. She has written several articles on popular religious culture, and delivered papers at conferences from Los Angeles to Glasgow, including an invited paper at Newnham College, Cambridge University.

As an historian, Annette is perhaps best known for her work in public history. She has developed children's history programs and presentations since 2003, most notably TimeShop (2004-2007), which was the subject of a 2006 Associated Press feature.

Annette lives in Georgia with her husband and son. And now she must face the 7 Questions:

No idea...I have eclectic tastes, and I've forgotten half the books I've enjoyed, much less read. Plus I always feel obliged, when answering such questions, to keep my selections high-falutin'... With that caveat, I will say in all honesty that I'm a Dickens fan, and love David Copperfield. Mind you, I'm also a Sophie Kinsella fan, and love the Shopaholic series, so you count those as #2 and #3. :-)

Question Six: How much time do you spend each week writing? Reading

Depends on how busy I am: I design and direct history camps for kids several times a year, and on camp weeks, I neither read nor write. Once I'm done with camp each day, I loll around drooling for hours. When I'm in full literary mode, I can spend 18 hours a day writing and/or reading. Most often, three hours a day writing. Wow, that was a complicated answer to a simple question, wasn't it?

Set out on the wandering trail of midlife crisis, wrote novel as catharsis, amazed when usually critical and always clever friends raved about early drafts. Sharp turn onto what looked like a dead end when I had major health crisis. Ignored yellow traffic lights from pals who urged me to send book to assorted agents, big publishers, etc. Decided I didn't want to be stuck at Stop sign for months or years (might kick the bucket from health crisis meanwhile). Went indie press route with eyes wide open, hoping enough friends would buy copies to avoid embarrassment. Started getting fan mail from strangers. Hit the freeway.

Favorite: The fun of daydreaming and editing, because I'm a weirdo who loves to edit her own stuff. Least favorite: Nothing. Really.

Get a life: Don't spend your youth swanning around proclaiming yourself a writer, and go have experiences instead. Write to amuse and entertain yourself *and others*: There are enough people navel-gazing onto paper and calling it art. Don't be an aspiring writer: Just write. Enjoy what you do, because there's no point in writing for fame and fortune.

Having lunch with a dead author would be a bit of a downer, and I don't imagine the conversation would be up to much. So I'll opt for the living. I would have lunch with Penelope Lively, be too tongue-tied to say much myself, and try not to bore her. She's so brilliant, so English, and so interesting. I am not worthy.

www.annettelaing.com
Posted by middle grade ninja at 8:56 AM