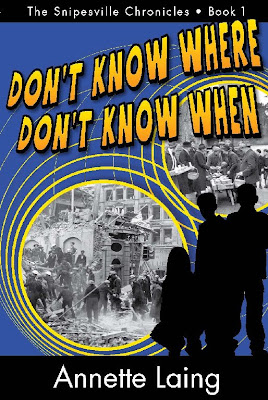 Today we’re talking about The Snipesville Chronicles, Book One: Don’t Know Where, Don’t Know When. Do you like time travel, esteemed reader? Do you like being immersed in the world of the past and learning about another time and place? Do you like educational fiction that aims to expand your knowledge base as well as entertain? You do! Well, you’re in luck.
Here’s the scoop on Don't Know Where, Don't Know When: Hannah Dias and her brother Alex are moving from California to the most boring place in the world, Snipesville, Georgia, where nothing exciting like time travel ever happens, or does it? It does. Hannah and Alex are having a tough time of things. Not only are they moving, but their mother has died in a car crash and their father is so busy with work he hardly has time for them. Their Grandparents worry that the Georgia schools won’t be up to the standard of California and that it will be the same racist land it was back when Ray Charles had difficulty finding a place where they’d let him sing their state song.

Meanwhile, Snipesville resident Brandon Clark has his own problems to contend with. He’s got an older brother whose trophies fill their house and an overbearing mother who keeps both Brandon and his father under her thumb. What Brandon wants most is to be a college student and to do some traveling, like his cousin Franklin. Brandon is also black and as though to confirm the suspicions of Hannah’s grandparents, Laing writes, “Franklin was a Big Shot, one of many Big Shots who had left black Snipesville to find careers they couldn’t have in town, where white Snipesville controlled most of the jobs.”

If ever there were three children in need of a time travel adventure, Hannah, Alex, and Brandon are surely them. So they fire up the Delorean to 88 mph and disappear into a lightening blast, leaving behind flaming tire tracks, right? Nope, there is no time machine. Okay, we’ll they dress in period clothes and hypnotize themselves until they have traveled through time like Christopher Reeve in Somewhere in Time, right? No, none of that either. In fact, there really isn’t a whole lot of time travel to speak of.

While they’re in a library, the children meet a professor who I am convinced is Annette Laing, though the text never says. Next thing the children know, all of the computers in the library have disappeared and the librarian is asking what the children are doing there, especially Brandon (because he’s black) and that’s how the children learn they are suddenly in the 1940’s. Who is the professor and why is she whisking innocent children through time? How is she doing it? Is she a witch, as the children speculate?

Minor spoiler, Laing never really gives us a concrete reason for the time traveling or the professor’s motivation for sending the children through time other than to teach them about history. The professor later explains, “I find the minute I sum up something, give it a name, and put it in a box, I’ve stopped trying to understand it, and that will never do… Tell me, Hannah, in your view, does everything have to have a creator and a point… Really, isn’t the experience itself the point?” Ka is a wheel, in other words (and if you know that reference, you are awesome).

Some may be disappointed by this explanation of time travel, or rather this lack of explanation. I was okay with it. And a conventional time travel story would not have worked here as lucky for Brandon, the children do not travel to the Georgia of yesteryear, but instead they wind up in England during World War Two. They arrive in “butt ugly” grey uniforms with English money in their pockets and fake identities. There is no conventional time travel device that would account for all of this and so Laing wisely avoids concocting one. Magic is as good an explanation as any.

In this way, Don’t Know Where, Don’t Know When reminded me of A Wrinkle in Time, another famous story in which three children have an amazing adventure without a great deal of explanation for it. Sometimes it’s best just to present a ridiculous premise as is and let the reader take it or leave it. No amount of explanation is likely to convince the reader that children in Georgia randomly travel through time to another country at the whims of a history professor, so why bother with an explanation? If the reader wants to enjoy the story, she accepts the premise, and if she wants to debate the finer points of time travel, she can read Stephen Hawking.

I have to admit, I had motivations for reading this book beyond merely promoting it here. I once had an idea for my own middle grade time travel story that would star two boys, one black and one white. I have yet to write it because I’m not sure how to handle the subject of race. If the boys were traveling back in time here in Indiana, say about forty years back, they would find that my home state was the proud head of Klu Klux Klan at that time. My wife and I wouldn’t have been able to marry and it’s a good thing we haven’t traveled through time as we likely would have been hung. One of my wife’s aunts was left to die by white doctors who wouldn’t admit her to a whites only hospital. When you hear certain politicians crying out for a return to simpler American times and values, do remember that the 1950s weren’t so swell for everybody and they aren’t coming back (thank God).

But I’m getting away from myself. How, then, should a writer deal with the subject of race in a middle grade book about time travel featuring a multi racial cast? I have no doubt this very question keeps you up nights. Does the writer ignore race completely and focus instead on the fun of a good time travel story? That approach might work if the multi racial cast is traveling to caveman times or some other period where race would not be an issue, or if the story itself has little to do with an actual historicaly acurate time. But if the multi racial cast travels to a time and place such as the 1940s and the details of that time are presented accurately in all other respects, the issue of race must be addressed. To do otherwise is to tell a lie and lose credibility. On the other hand, racism is an ugly subject and parents may not want a truly frank addressing of it in a “children’s novel” outside of Huck Finn, which they keep trying to ban from libraries. Maybe it’s best just not to go there, which so far is the approach I have taken.

Laing is not the coward that I am, and she goes there and what she does is to address the subject head on, and then she drops it. A few characters make snide comments to Brandon. He is referred to as colored and a negro and asked to leave the library and then he somehow is separated from Hannah and Alex and travels to 1915 England when race is not as much of an issue. Because Don’t Know Where, Don’t Know When isn’t concerned so much with racism or time travel. Its purpose is to educate and that it does in a fun way. If you’re a history buff or you have children who are eager to learn, this is a book you’ll want to check out. If you’re not a history buff, you might just enjoy checking it out anyway.

Posted by middle grade ninja at 9:43 AM