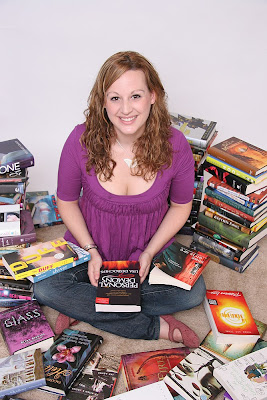 She’s interested in strong characters and voice driven stories: she’s particularly keen on strong female protagonists, complex plot lines with underlying political, moral, or philosophical issues, and stories which break out of the typical tropes of their genre.

She drinks too much diet orange soda, has a Starbucks problem (those soy chai lattes are addictive), and lives in Brooklyn with two dogs who know that chewing on shoes is okay but chewing on books is not.

Suzie keeps a blog at http://confessionsofawanderingheart.blogspot.com and can be found on twitter @sztownsend81.

I met Suzie last weekend at the Midwest Writer's Workshop and I can tell I never saw her without a bottle of diet orange soda for three days. She was able to tell us off the top of her head the exact number of submissions she had recieved and precisely how many books she had read for the year. She's fun and personable, but she also means business when it comes to books, and that's what you most want in an agent.

This of course feels impossible to just name three! But here goes:

3. How I Live Now by Meg Rosoff

As for my top MG:

2. When You Reach Me by Rebecca Stead

3. Things Behind the Sun

My idea client is someone who's open to revisions and turning their work into the best it can possibly be and is always communicative with any questions they have or problems they're coming up against.

I'm looking for literary Middle Grade (like When You Reach Me), literary YA with a speculative twist (like Before I Fall or How I Live Now), and in adult fiction, I'm looking for urban fantasy, paranormal romance, and romantic fantasy (for all three the darker the better).

I love working with writers, helping them develop their projects and their career. And I love being a part of the publishing industry as a whole - contributing to the publication of great books. The thing I love the least about publishing are the attitudes some people approach agents with. I understand the frustrations of the industry that writers deal with, but angry ranting emails or phone calls aren't going to accomplish anything.

Read. And find critique partners who read and write in your own genre.

Alice Sebold. Because I think she's brilliant and inspiring. As a writer and a person.

Posted by middle grade ninja at 11:21 AM