Book of the Week: RESCUING SENECA CRANE by Susan Runholt 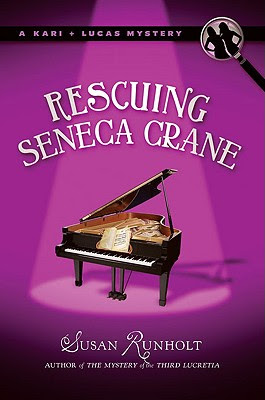 Do you like a good mystery, Esteemed Reader? A hint of danger and some heart-pounding adventure? Unless you have some sort of special heart condition or a neurological disorder, I’ll assume that you do. And therefore you are going to love Susan Runholt’s Kari + Lucas Mysteries. The ninja loves them and is looking forward to future additions.

So we’re going to change things up a little bit this week. Instead of reviewing one book, I’m going to review two books in one post. Why? Well, I don’t review every book I read and I enjoyed the first book in the series, Mystery of the Third Lucretia, on audio book. I highly recommend that version, by the way, as the reader is fantastic. I wrote to Susan Runholt to ask her to appear here (she will, this Thursday!) and guess what? She sent me a signed copy of Rescuing Seneca Crane! God, I love being a ninja!

Here is perhaps the finest praise I can offer a series: when the third book comes out, I’ll be all over The Adventure of Simba Hill, just for me. I want to know what happens to Kari and Lucas and I want to see what Runholt’s going to do to top these first two wonderful books. If you haven’t read Runholt’s mysteries yet, get started now and we can wait for book three together.

That officially concludes the review portion of this review: buy these books. Now let’s talk craft. A good series is hard to pull off, yet so many writers have ambitions for one, including the ninja. As a writer, part of the appeal to the series is a multi-book contract. But more, I suspect the joy in writing a series is the same joy the reader has in getting to spend more time with the same characters and experiencing a story larger than one book can contain. Whether that series is a Harry Potter story that is interconnected and building parts to a larger whole, telling one story over seven books. Or whether, as is the case here (so far), the books in the series are each self contained adventures like Batman stories or a television show. I like both kinds of series, but my preference is for episodic tales so that if one book sucks (not the case here) it doesn’t drag down the rest:)

Regardless of the type of series, the pressure is on the writer to create fantastic characters. This is a pressure the writer always feels as we’ve got to create fictional people interesting and likeable enough that the reader wants to spend a whole book with them. In a series, the reader may be spending seven books or more with these characters. So take the pressure of creating one book’s character and multiply it by seven, I suppose. Kari and Lucas, two 14-year-old girls from Minnesota, are definitely likeable enough for the reader to want to spend four books with them. Heck, I’ll spend more books with Kari and Lucas if Runholt is up to it.

More, Kari and Lucas have the sort of qualities that will make them compelling protagonists regardless of the mystery facing them. They are curious about the world and the motivations of people. This is an essential quality for any detective to have, but Runholt doesn’t just tell us this (perish the thought!). She establishes the girls' curiosity in Mystery of the Third Lucretia. At an art museum in Minneapolis, the girls are treated rudely by a man copying a Rembrandt. When they see him later wearing a disguise, they decide to follow him and from this action flows the entire adventure that follows. What a masterful stroke this is! Though the girls remain very curious in Rescuing Seneca Crane as well, the subject of that book is a kidnapping of their friend, which one hardly need be curious to notice and be concerned with. But in the very first book of the series, this essential character quality of Kari and Lucas is forever established throughout the series because it is essential to the plot (and the plot comes from character, so bonus). The girls are insufferably curious, which might just get them killed were there not a third book on the way:)

In fact, most of Runholt’s world building in Mystery of the Third Lucretia is clearly being built to last. Various parts of the plot, though they tie in to the first adventure, go out of their way to establish the set up for future novels. Minor spoiler… Kari’s mom gets a job writing about international fashion for a magazine, which means she’ll need to do a lot of traveling, dragging the girls around Europe with her. As these are international mysteries, you can bet that will come in handy. Also, we’re introduced to Lucas’s father, a workaholic who never makes time for her, and her mother, who would much rather be free of her child so she can spend more time shopping with friends. While this sucks for Lucas, it’s great for Runholt because it means Lucas will always be free to go globetrotting with Kari and her mother.

The Kari + Lucas Mysteries are considered upper middle grade, or tween, which presents an interesting challenge to writers. On the one hand, the characters are old enough to have been exposed to many of the less savory aspects of the adult world. On the other hand, kids read up, and it’s likely a given that kids as young as ten or even eight will be reading in addition to fourteen-year-olds and adult ninjas. And the covers of these books, not that a writer always has a say in that, are bright and colorful and likely to attract readers of all ages.

What then is a writer to do? How does she acknowledge the age of the protagonists, who would probably swear and talk about naughty things at fourteen (or maybe I was just warped) without risking a younger readership? One of my favorite of Runholt’s inventions to get around this is her giving the girls their own way of swearing. When the girls want to swear, they insert a “meep” for the swear, as in “Oh meep,” “I feel like meep,” and my favorite, “Alan The Meep.” It’s important to remember that it is the age of the reader, not of the protagonist that determines content. After all, the protagonist in Amy Reed’s Beautiful was only thirteen.

A common complaint of mine is that too often in middle grade books the horror is not really scary, the danger isn’t really all that dangerous, and the mystery isn’t much of a challenge. As a ninja, I keep reading, but when I was kid I put a book down as soon as I felt its writer was being condescending(i.e. trying to convince me a rabbit sucking carrot juice was scary, though I loved that book). I wouldn’t have put Runholt’s book down. There is a reason Kari and Lucas are fourteen instead of ten. They’re dealing with some pretty serious stuff, and though Runholt keeps the story light and fun, she deals rather realistically with the world around it.

If Lucas and Kari were younger, they might be dealing with the mystery of the stolen cookie jar. But Runholt has loftier plans. In the first book, the girls are hot on the tail of an international art forgery that would be at home in a Dan Brown thriller (assuming there were a pseudo-religious twist), and in the second book, they’re chasing after kidnappers that might make William Kent Krueger proud. The girls censor themselves, but the villains don’t behave as though they know they’re in a story written for younger readers. There are murders and discussions of rape (all tactfully handled, I promise). In one scene, the girls tour Amsterdam’s Red Light district and are mistaken for, ahem, madams of the evening. Some parents may object to this, and if that’s you, go ahead and object. I, for one, was thrilled to have found a mystery that was truly exciting involving dangers that were actually dangerous.

I see we are past our maximum word count and I haven’t really told you the plot of either book, but that’s a good thing. The less you know going in, the more pleasantly surprised you’ll be. But I will say how much I appreciated the pacing at the beginning of Rescuing Seneca Crane. We know who the characters are and how it is they come to be able to travel overseas, so Runholt is able to start the adventure and keep it going to the last page.

And that wraps us up. Two big thumbs up for the Kari + Lucas mysteries. And don’t forget to drop back by on Thursday when we’ll have author Susan Runholt here to face the 7 Questions!