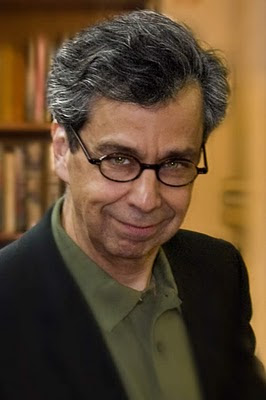 Click here to read my review for The Smoky Corridor

His books for adults include The Holiday Thriller Series: Slay Ride,

Hell for the Holidays: A Christopher Miller Holiday Thriller,

and The John Ceepak Mysteries: Tilt-a-Whirl

Chis Grabenstein studied journalism and theater at college and then moved to New York City with six suitcases, a typewriter, and very little money. For five years, he performed and won awards with some of the city's top Improvisational Comedy troupes, making up scenes and songs on the spot in front of live audiences, just like they did on "Whose Line Is It Anyway?"

A young actor named Bruce Willis was also in Chris's comedy group, but nobody knows what happened to him. From time to time, Robin Williams would drop by to perform with Chris and his comedy gang. When not writing scripts for his friends to perform in the small Greenwich village theatre (which was actually another basement) Chris also wrote for Jim Henson's Muppets.

In 1986, he and his college buddy Ronny Venable wrote a TV movie for CBS called The Christmas Gift

. It starred John Denver and can still be seen almost every year during the holidays, usually on the Hallmark Channel.

Number one is A PRAYER FOR OWEN MEANY by John Irving.
Number Two PET SEMATARY by Stephen King (and just about everything else he ever wrote).
Number Three THE HUNGER GAMES
Question Six: How much time do you spend each week writing? Reading?
I try to write 2,000 new words a day, Monday-Friday. Some days that takes four hours. Other days eight. Dialogue days move the fastest. I read for an hour or two every day.
Question Five: What was the path that led you to publication?
Persistence. Keeping on keeping on. After working as an advertising copy writer for close to twenty years, I spent four years in a room writing screenplays and manuscripts nobody was interested in. Then, in 2005, my first mystery TILT A WHIRL was published. It won the Anthony Award for best first mystery. Now, five years later, my eleventh book (fourteenth if you count the short story collections) is about to come out!
Question Four: Do you believe writers are born, taught or both? Which was true for you?
Probably both. Writers are readers who don't want the stories to end so they start making up their own. I often credit my study of Latin in Catholic High School with making me fall in love with words and wordplay. I also had some terrific English teachers who encouraged me to keep writing.
Question Three: What is your favorite thing about writing? What is your least favorite thing?
The actual writing. Sitting down with a cup of coffee and my keyboard and letting the characters come alive in my head. The worst part is wondering whether what you've written is any good.
Question Two: What one bit of wisdom would you impart to an aspiring writer? (feel free to include as many other bits of wisdom as you like)
Read a lot. And then, take apart your favorite book the way you might take apart a clock to see what makes it tick. Read it three times. Once just for fun. Then, start reading it with a pen in hand. If it's your copy, make notes in the margins. What happens when? What did the author plant in chapter one that he or she uses in chapter ten. What kind of words does the author use? Completely deconstruct it the way we used to tear apart Shakespeare when I went to school. Read like a writer and learn the craft hidden under the art.
Question One: If you could have lunch with any writer, living or dead, who would it be? Why?
Stephen King. He is, simply amazing. The Dickens of my generation. And Shakespeare could come along, too, as long as he didn't "hey, nonny-nonny" too much.

Posted by middle grade ninja at 9:54 AM